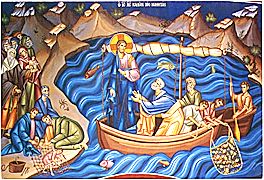 The Calling of the Twelve

An Apostle is one who is sent out by our Lord Jesus Christ to spread the gospel that he is the Messiah, that he is risen, and that we are being saved as a result.

The word apostle comes from the Greek αποστολος, literally meaning "one who is sent out." Originally a military term referring to a sortie sent out against the enemy, apostle has in the Christian context come to refer to a missionary spreading the gospel of Jesus Christ. 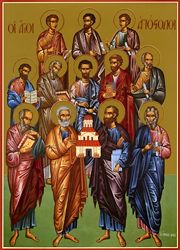 Synaxis of the Twelve Apostles

Our Lord originally appointed twelve apostles as his initial Church community, commissioned with the task of sharing the faith. As told in the Gospels, Judas Iscariot was originally one of them, but with his apostasy and death, he was replaced with Matthias. Their collective feast day is June 30. The Apostles' names are listed at Matthew 10:2, Mark 3:14, Luke 6:12, Acts 1:13, 26.

After Judas' replacement, the Twelve consisted of the following:

Hymns to the twelve

O holy Apostles of Christ
Pray to our merciful God,
That he may grant us remission of our sins.

Today Christ the Rock gladly glorifies the rock of faith,
The chosen disciple, together with Paul and the entire company of the Twelve.
As we celebrate their memory,
We glorify him who has glorified them!

The Seventy Apostles are those whom the Lord chose (described in Luke 10:1-16) in addition to the Twelve and sent forth to assist in the work of preaching. Over time, the Twelve added others to their number, who were sent out with the original Seventy to preach the gospel. Although this number eventually exceeded seventy, they were all nevertheless referred to as "of the Seventy" out of reverence to the number which the Lord originally chose. Their collective feast day is January 4. 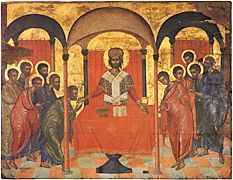 Communion of the Apostles

It is difficult to determine a comprehensive and accurate list of the Seventy, but here are some of their names:

Hymns to the seventy

Holy apostles of the Seventy,
entreat the merciful God
to grant our souls forgiveness of transgressions.

O faithful, let us praise with hymns
the choir of the seventy disciples of Christ.
They have taught us all to worship the undivided Trinity,
for they are divine lamps of the Faith.

The Apostle Paul (June 29) is also referred to as an apostle, though he is not one of the Twelve or of the Seventy. Other missionary saints are also referred to as apostles, though usually not as an initial title, but rather as an epithet, e.g., "Apostle to the North" (though some regard this usage as not traditionally Orthodox). Further, other saints have the epithet "Equal-to-the-Apostles" (in Greek, Ισαποστολος), usually because of their significant work in building up the Church. St. Paul shares the collective feast day with the Twelve Great Apostles. He was beheaded in Rome during the reign of Emperor Nero.