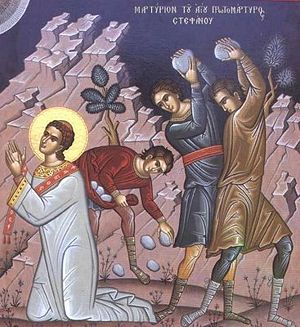 The holy, glorious, all-laudable Apostle and Archdeacon Stephen the Protomartyr (Gk. Στέφανος, "crown") was an early Christian convert from among the Hellenistic Jews, one of the original seven deacons ordained by the Apostles, and the first martyr of the Orthodox Church. The Church remembers the martyrdom of St. Stephen on December 27, and the translations of his relics on August 2, as well as commemorating him on June 15 with Ss. Fortunatus and Achaicus.

St. Stephen was a Jew living in the Hellenic provinces, related to the Apostle Paul and one of the first seven deacons ordained by the Apostles to serve the Church in Jerusalem (thus making him an archdeacon). In the words of Asterias, St Stephen was "the starting point of the martyrs, the instructore of suffering for Christ, the foundation of righteous confession, since Stephen was the first to shed his blood for the Gospel."

In the Acts of the Apostles, we read in chapter 6 that Stephen was appointed together with six others to minister to the needs of the poor: "Now in those days, when the number of the disciples was multiplying, there arose a complaint against the Hebrews by the Hellenists, because their widows were neglected in the daily distribution. Then the twelve summoned the multitude of the disciples and said, 'It is not desirable that we should leave the word of God and serve tables. Therefore, brethren, seek out from among you seven men of good reputation, full of the Holy Spirit and wisdom, whom we may appoint over this business; but we will give ourselves continually to prayer and to the ministry of the word.' And the saying pleased the whole multitude. And they chose Stephen, a man full of faith and the Holy Spirit, and Philip, Prochorus, Nicanor, Timon, Parmenas, and Nicolas, a proselyte from Antioch, whom they set before the apostles; and when they had prayed, they laid hands on them. Then the word of God spread, and the number of the disciples multiplied greatly in Jerusalem, and a great many of the priests were obedient to the faith. And Stephen, full of faith and power, did great wonders and signs among the people." In addition to St Stephen's philanthropic labors, the Holy Spirit worked powerfully through his faith, enabling him to perform many miracles and to defeat the Jews who disputed with him.

The Jews in their hatred of St. Stephen lied about him to the people, but St. Stephen with his face illumined preached to the people, reminded them of the miracles God had worked through him, and even rebuked the Jews for killing the innocent Christ.

At this point, the book of Acts tells us, the people were enraged by what they thought was blasphemy and "gnashed their teeth" at Stephen. "But he, being full of the Holy Spirit, gazed into heaven and saw the glory of God, and Jesus standing at the right hand of God, and said, “Look! I see the heavens opened and the Son of Man standing at the right hand of God!” Then they cried out with a loud voice, stopped their ears, and ran at him with one accord; and they cast him out of the city and stoned him. And the witnesses laid down their clothes at the feet of a young man named Saul. And they stoned Stephen as he was calling on God and saying, “Lord Jesus, receive my spirit.” Then he knelt down and cried out with a loud voice, “Lord, do not charge them with this sin.” And when he had said this, he fell asleep." (Acts 7:55-60)

Soon after this, the young Jewish leader named Saul turned to Christ and became known as the Apostle Paul).

Church tradition holds that, at the time of Stephen's martyrdom, far off on a hill at this time, stood the Virgin Mary and St. John the Theologian who witnessed this first martyrdom for the Son of God and prayed for him while he was being stoned.

St Stephen's martyrdom occurred about a year after the first Pentecost.

The body of the holy Protomartyr Stephen, was left at the foothill of the city for two days to be eaten by dogs. But on the second night, Gamaliel— teacher of the Apostle Paul and the Apostle Barnabas— along with his son, secretly came and took the body to his own estate, in Capharganda, to be buried.

Nicodemus, who died while weeping at this grave, was also buried there along with Gamaliel's godson Abibus and Gamaliel himself upon his repose.

After many years the memory of St. Stephen's burial place had left the minds of men, until 415 when Gamaliel appeared three times to Father Lucian, priest at Capharganda. He revealed to Fr. Lucian the place of his burial and everything about it. Fr. Lucian received the blessing of the Patriarch to exhume the saints from their grave where a strong, sweet fragrance filled the cave. 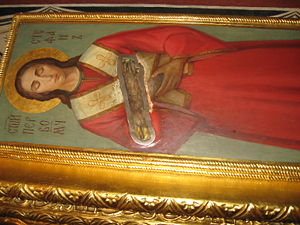 Relic of St. Stephen in Russia [1]

As mentioned above, the main commemoration for St Stephen is December 27, the day of his repose by martyrdom(stoning). The Orthodox Church celebrates the discovery (opening) of the Saint's relics on September 15 and the Translation of the Relics of Protomartyr Stephen on August 2. The September 15 feast day celebrates the discovery of Stephen's relics in 415, after which they were solemnly transferred to a church built in his honor in Jerusalem. Later, during the reign of Emperor Theodosius the Younger (408-450), the relics were transported to Constantinople: this event being commemorated on August 2. January 4 marks the commemoration of the "Synaxis of the 70 Apostles". Since St. Stephen was included in these 70 Apostles mentioned in the "Acts of the Apostles", he is also remembered on January 4.

O First Martyr and Apostle Of Christ,
Thou hadst fought the good fight.
And didst expose the perversion of the persecutors,
For when thou wast killed by stoning at the hands of wicked men,
Thou didst receive a crown from the right hand on high,
And didst cry out to God saying,
"O Lord do not charge this sin against them!"