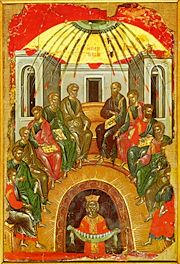 Pentecost icon - Descent of the Holy Spirit onto the Church.

The Holy Spirit, or Holy Ghost is God, the third Person of the Holy Trinity, who, from eternity, "proceeds" from the Father (John 15:26). The Holy Spirit is co-equal with the Father and the Son. The word "Spirit" commonly translates the Greek New Testament word pneuma.

The Holy Spirit's Attributes (i.e. What He does)

The Spirit dwells inside every true Christian, each one's body being his temple (First Epistle to the Corinthians 3:16). He is depicted as a 'Counsellor' or 'Helper' (paraclete in Greek, guiding them in the way of the truth. The 'Fruit of the Spirit' (i.e. the result of his work) is "love, joy, peace, patience, kindness, goodness, faithfulness, gentleness and self-control" (Galatians 5:22). The Spirit is also believed to give gifts (i.e. abilities) to Christians.

The Holy Spirit in the New Testament

Christians believe that it was the Holy Spirit whom Jesus mentioned as the promised "Comforter" (i.e. "strengthener", "fortifier") in John 14:26. After his resurrection, Christ told his disciples that they would be "baptized with the Holy Ghost", and would receive power or endowment (Acts 1:4-8); a promise that was fulfilled in the events recounted in the second chapter of Acts. On the first Pentecost, Jesus' disciples were gathered in Jerusalem when a mighty wind was heard and tongues of fire appeared over their heads. A multilingual crowd heard the disciples speaking, and each of them heard them speaking in his or her native language.

Holy Ghost was the common name for the Holy Spirit in English prior to the 20th century. It is the name used in the King James Version of the Bible, and is still used by those who prefer more traditional language. The word ghost has lost its old meaning of the spirit or soul that is inside man and come to be identified almost exclusively with the concept of disembodied spirits, usually of the dead, which may "haunt" the living, an idea far from that intended by the King James translators.

Common Misconceptions in the West of The Holy Spirit [1]

In common Western Christianity (i.e. Roman Catholicism and subsequent Protestant beliefs) the power of God is considered created, and grace is considered something intrinsic to man. Orthodoxy considers the Holy Spirit to be the Power of God (i.e. His Grace). The Orthodox, however, point out that anything that existing before creation is God; and as there is never a time God existed without His Power, God's Power is also God and, in fact, is the Holy Spirit.

This has important theological implications because in common Western Christianity, when God's grace comes to a person, it is God's favor, not God's Spirit by which we are saved. In fact, according to St. Seraphim of Sarov, the purpose of one's life is to acquire the Holy Spirit, for this is how believers participate in the life of God--through the indwelling of His Spirit--to become gods (John 10:34). (see theosis)

The common Western perception is that God cannot unite Himself to a person because such would cause the person to become God. St. Gregory of Palamas's astute insight pointed out that such reasoning conflates who God is (God's nature/essence/substance) with what God does (God's attributes). Those Western Christians who conflate these point to St. Augustine's writings for support. (It may be the interpretation of Augustine's teachings, rather than the teachings themselves, that forms the basis of the conflation.[2]) Regardless, the conflation accords with neither Orthodox experience (of Orthodox saints such as Sts. Gregory Palamas and Seraphim of Sarov), nor Orthodox understanding of Scripture.

There is an analogy using the sun that the Orthodox use to explains this. Just as the sun can shine on and warm a seed, and just as a seed can take into itself that light and warmth, and participate with such in its life and growth, that seed will never become the sun. The point is this: One can experience the light (Son) and warmth (Holy Spirit) of God (the Father) and not become God, but nonetheless respond to the Trinity and evidence Him through one's existence and growth. The more the light and warmth enter the person, the more one grows and glorifies God (see theosis). Growth cannot happen without God, and one must be filled with His Spirit in order to grow in His Likeness. (see Trinity for a differentiation of Image & Likeness) 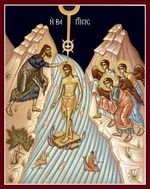 Holy Spirit depicted as a dove