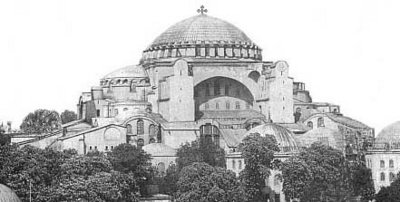 Ecclesiology is the theology of the Orthodox Christian faith concerning the Church.

The Church is the Body of Christ, a theanthropic (divine-human) communion of Jesus Christ with his people. The sole head of the Church is Christ. The Church is an object of faith, that is, Orthodox Christians believe in the Church. The traditional belief in the Church is attested to in the Nicene-Constantinopolitan Creed as the one, holy, catholic and apostolic Church. By this phrase is meant that the Church is undivided and not many (one), sanctified and set apart for the work of God (holy), whole and characterized by fullness and universality (catholic), and has at its essence the going out into all the world to preach the Gospel and baptize the nations (apostolic).

Because the Church is the Body of Christ, it is also the temple and dwelling place of the Holy Spirit. It is a continued Pentecost.

The Church consists of the prophets and saints of both the Old and New Covenants, the angels and the concrete, historical community of believers in this earthly life, past and future generations, in one and the same grace of God . It is both visible and invisible, both divine and human. It is visible, for it is composed of concrete congregations, worshipping here on earth; it is invisible, for it also includes the saints and the angels. It is human, for its earthly members are sinners; it is divine, for it is the Body of Christ. Not unlike the incarnation.

There is no separation between the visible and the invisible, between (to use western terminology) the Church militant and the Church triumphant, for the two make up a single and continuous reality. The Church visible, or upon earth, lives in, complete communion and unity with the whole body of the Church, of which Christ is the Head. Orthodoxy, therefore, while using the phrase 'the Church visible and invisible,' strongly insists that there are not two Churches, but one. (The term is only in relation to man.)