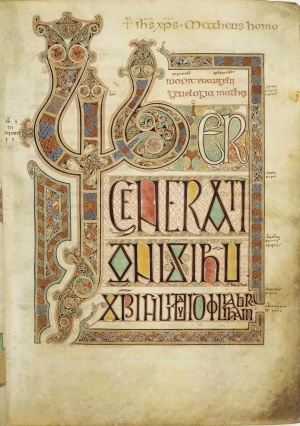 The opening page of the Gospel of Matthew from the eighth-century Lindisfarne Gospels.

The Gospel of Matthew (literally, "according to Matthew"; Greek, Κατα Μαθθαίον or Κατα Ματθαίον) is the first Gospel in the New Testament. Traditionally, it was written by the Apostle Matthew, a former tax-collector who became one of the twelve apostles who witnessed the earthly ministry, crucifixion, and Resurrection of our Lord Jesus Christ.

Although the document is internally anonymous, the authorship of this Gospel has been traditionally ascribed to St. Matthew. The surviving testimony of the Church Fathers is unanimous in this view, and the tradition had been accepted by Christians at least as early as the 2nd century up to modern times. In addition, the title "According to Matthew" is found in the earliest codices, which date to the fourth century.[1]

According to Tradition, after Pentecost St. Matthew preached the Good News of the Lord's Resurrection throughout Palestine. Then, "at the request of the Jewish converts at Jerusalem, the holy Apostle Matthew wrote his Gospel describing the earthly life of the Savior before leaving to preach the Gospel in faraway lands."[2] He then left to preach his Gospel in Syria, Media, Persia, Parthia, before being martyred in Ethiopia.

Because it was first recorded in Palestine, there is some speculation and evidence that Matthew's Gospel was originally written in Aramaic, though the earliest surviving version now in existence is in Greek. According to the OCA, "many of the linguistic and cultural-historical peculiarities of the Greek translation give indications of it [the Gospel's original Aramaic form]."[2] It was probably written somewhere from AD 60-65, though more liberal scholars put the date at 80-100.

The one aim pervading the book is to show that Jesus of Nazareth was the promised Messiah—he "of whom Moses in the law and the prophets did write"—and that in him the ancient prophecies had their fulfillment. This book is full of allusions to passages of the Old Testament which the book interprets as predicting and foreshadowing Jesus' life and mission. This Gospel contains no fewer than 65 references to the Old Testament, 43 of these being direct verbal citations, thus greatly outnumbering those found in the other Gospels. The main feature of this Gospel may be expressed in the motto "I am not come to destroy, but to fulfill" (Matt. 5:17). The Apostle Matthew preached among people who were awaiting the Messiah. His Gospel manifests itself as a vivid proof that Jesus Christ is the Messiah foretold by the prophets, and that there would not be another (Matt. 11:3).

The preaching and deeds of the Savior are presented by the evangelist in three divisions, constituting three aspects of the service of the Messiah: as Prophet and Law-Giver (Matt. 5-7), Lord over the world both visible and invisible (Ch. 8-25), and finally as High Priest offered as Sacrifice for the sins of all mankind (Matt. 26-27).

In general, the text of the gospel of St. Matthew is used most consistently in liturgical worship of the Orthodox Church. This may be because it was the most common gospel in the very early Churches. It contains the version of the beatitudes and the Lord's Prayer that is used in services.

Only this gospel contains the post-resurrection order of the Lord to his apostles, "to make disciples of all nations, baptizing them in the name of the Father, and of the Son and of the Holy Spirit" (Matt. 28:19). And it contains the longest and most detailed record of Christ's teachings in the Sermon on the Mount (Matt. 5-7).