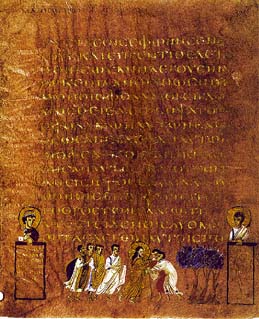 A sixth-century Gospel manuscript in Greek with a drawing of Christ healing the blind
The New Testament is the second part of Holy Scripture, after the Old Testament. The New Testament, also called the New Covenant, details Christ's life and the teachings of the Early Church; it is thus a fulfillment of the prophecies of the Old Testament and the most important text in the life of the Church. The New Testament consists of the Gospels, which detail Christ's earthly life, Acts of the Apostles, the Epistles, and the Book of Revelation. It is generally acknowledged to have been written by numerous authors between A.D. 48 and 140.

The New Testament is comprised of 27 separate works: the four narratives of Jesus Christ's ministry, called "Gospels"; a narrative of the Apostles' ministries, which is also a sequel to the third Gospel, written by Luke; twenty-one early letters, commonly called "epistles" in Biblical context, which were written by various authors and consisted mostly of Christian counsel and instruction; and an Apocalyptic prophecy, which is also technically the twenty-second epistle.

The Acts of the Apostles, also called the Book of Acts or just Acts, is a narrative of the Apostles' ministry after Christ's death and a sequel to the third Gospel. Holy Tradition, as well as style, phraseology, and other evidence, say that Acts and Luke have the same author, the Apostle Luke. Luke wrote down his narrative from the words of the Apostle Paul, with whom he travelled to Rome.

The General or Catholic Epistles are those written to the church at large ("catholic" in this sense simply means "universal").

In ancient times there were dozens—perhaps hundreds—of Christian writings claiming Apostolic authorship, but which were ultimately rejected by the Church Fathers in the 27-book New Testament canon. These works are considered "apocryphal", and are therefore referred to in singular as the New Testament Apocrypha. The Apocrypha include a large amount of gnostic writings, spurious prophecy, fantasy, and in general a number of other heretical teachings. Below are some examples of early apocryphal works (please note this short list is by no means exhaustive):

The common language spoken in the Holy Land at the time of Jesus was Aramaic. However, the original text of the New Testament was most likely written in Koine Greek, the vernacular dialect in 1st century Roman provinces, and has since been widely translated into other languages, most notably, Latin, Syriac, and Coptic. (However, some of the Church Fathers seem to imply that Matthew was originally written in Hebrew or more likely Aramaic, and there is another contention that the author of the Epistle to the Hebrews wrote in Hebrew, which was translated into Greek by Luke. Neither view holds much support among contemporary scholars, who argue that the literary facets of Matthew and Hebrews suggest that they were composed directly in Greek, rather than being translated.)