From OrthodoxWiki
(Redirected from Kallistos Ware)
Jump to: navigation, search 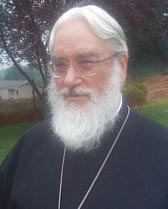 His Eminence, the Most Reverend Metropolitan Kallistos (Ware) of Diokleia (September 11, 1934 - August 24, 2022, also known by his lay name, Timothy Ware) was a titular metropolitan of the Ecumenical Patriarchate in Great Britain. From 1966-2001, he was Spalding Lecturer of Eastern Orthodox Studies at Oxford University, and had authored numerous books and articles pertaining to the Orthodox Christian faith, and Orthodoxy's relationship to broader culture, including the sciences. He reposed in the Lord after struggling with various illness on August 24th, 2022.

Born Timothy Ware in Bath, Somerset, England, Metropolitan Kallistos was educated at Westminster School (to which he had won a scholarship) and Magdalen College, Oxford, where he took a Double First in Classics as well as reading Theology. In 1958, at the age of 24, he embraced the Orthodox Christian faith (having been raised Anglican), traveling subsequently throughout Greece, spending a great deal of time at the Monastery of St. John the Theologian in Patmos. He also frequented other major centers of Orthodoxy such as Jerusalem and Mount Athos. In 1966, he was ordained to the priesthood and was tonsured as a monk, receiving the name Kallistos, in honour of St. Kallistos Xanthopoulos.[note 1]

In the same year, he became a lecturer at Oxford, teaching Eastern Orthodox Studies, a position which he held for 35 years until his retirement. In 1979, he was appointed to a Fellowship at Pembroke College, Oxford, and in 1982, he was consecrated to the episcopacy as a titular bishop with the title Bishop of Diokleia, appointed to serve as the assistant to the bishop of the Ecumenical Patriarchate's Orthodox Archdiocese of Thyateira and Great Britain. Despite his elevation, Kallistos remained in Oxford and carried on his duties both as the parish priest of the Oxford Greek Orthodox community and as a lecturer at the University.

Since his retirement in 2001, Kallistos had continued to publish and to give lectures on Orthodox Christianity, traveling widely. Until recently, he was the chairman of the board of directors of the Institute for Orthodox Christian Studies in Cambridge. He was the chairman of the group Friends of Orthodoxy on Iona and served on the advisory board of the Orthodox Peace Fellowship.

On March 30, 2007, the Holy Synod of the Ecumenical Patriarchate elevated the Diocese of Diokleia to Metropolis and Bishop Kallistos to Titular Metropolitan of Diokleia.

List of Writings by Kallistos (Timothy) Ware, Bishop of Diokleia

Metropolitan Kallistos was perhaps best known as the author of the book The Orthodox Church, published when he was a layman in 1963 and subsequently revised several times. More recently, he produced a companion volume, The Orthodox Way.

However his most substantial publications have emerged from his translation work. Together with G. E. Palmer and Philip Sherrard), he had undertaken to translate the Philokalia (four volumes of five published to date); and with Mother Mary he produced English translations of the Lenten Triodion and Festal Menaion.

The list below contains the complete writings of Metropolitan Kallistos (up until the year 2001), as published in the Festschrift that was written for him,[note 2] celebrating his retirement from active professional responsibilities in 2001.[note 3] Each section below is listed in chronological order .

[The introduction and appendices are by KW; the translation was made jointly.]

[The introduction is by KW, the translation was made jointly.]

[Also printed in Alberic Stacpoole (ed.), Mary in Doctrine and Devotion: Papers of the Liverpool Congress of the Ecumenical Society of the Blessed Virgin Mary (Dublin: The Columba Press, 1990), 34-41.]

[Reprinted separately with the title How are we Saved? The Understanding of Salvation in the Orthodox Tradition (Minneapolis Mn: Light and Life, 1996), 19 pp.]

[Reprinted in Edward Yarnold (ed.), The Place of Mary in the Church: Mariologists on Mary – Co-Redeemer (Wallington, Surrey: Ecumenical Society of the Blessed Virgin Mary (1998), 3-5.]

Introductions to Other Works