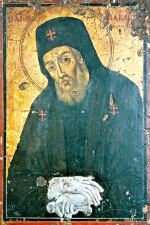 Our father among the saints Macarius Notaras of Corinth, Metropolitan of Corinth, was a mystic and spiritual writer who worked to revive and sustain the Orthodox Church under Turkish rule. His feast day is April 17.

St. Macarius was born Michael Notaras in 1731 in Corinth, Greece, into the wealthy and influential family of George Notaras of Corinth that traced itself back to the Senate of the Eastern Roman empire. He was educated in sacred letters and Greek learning and, from his youth, showed signs that he did not incline towards worldly things and lived with great piety, attended church services, and shunned activities of vanity. As a youth he joined the Megalo Spyleon (Great Cave) Monastery in the Peloponnesus from which his father had him forcibly returned

He occupied himself reading and studying the Holy Scriptures as well as other instructive and edifying books. He also spent six years teaching in the school of Corinth without pay. In 1764, upon the death of Abp. Parthenios of Corinth, the people of Corinth recognized his holiness and elected him as their hierarch. Michael was ordained into the Holy Orders wearing the clothing of a monk and was given the name Macarius, He was then consecrated Archbishop of Corinth by Patr. Samuel I in Constantinople.

As their teacher, Abp. Macarius set about preaching to the people. He strove to rid the Church of corruption and ineffectual priests. He established a preparation plan of the sending candidates for the priesthood to monasteries for education and training so that all priests were properly qualified. He also ensured that adequately sized baptismal fonts were available so that baptisms were properly performed.

In 1768, the Russo-Turkish War forced Abp. Macarius to flee Corinth with his family and by the time he returned the Holy Synod of the Constantinople Patriarchate had assigned a new archbishop for Corinth for diplomatic reasons. The Synod, however, gave to Abp. Macarius the right to serve anywhere he liked unhindered. He wandered to Chios and then Mount Athos where he became involve in the Kollyvades movement, taking a strict stand on keeping the early Christian practices and ridding the Church of bad innovations such as memorial services for the dead on Sundays. Finding the upheaval at Athos disappointing, Abp. Macarius left for Chios and then Patmos. 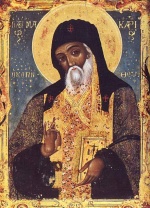 St. Macarius of Corinth
On Patmos, Macarius was attracted by the Holy Cave of the Revelation and the Godly guarded Monastery of St. Christodoulos. There in 1782, with the permission of the Monastery of Saint John, Abp. Macarius founded a hermitage with a small church to honor All the Saints on Mount of Koumana and spent the next ten years. There he met Niphon of Chios, Gregory of Nisyros, and Athanasius of Armenia. In his isolation, Macarius began copying, by hand, the codices and wrote a biography of St. Christodoulos. Finding works of the Fathers of the Church in the monastery library, Macarius selected from them material for the Philokalia that, later, he gave to St. Nicodemus the Athonite.

In 1793, Abp. Macarius left Patmos for Corinth to settle the affairs of his father who had died, never to return. In Corinth, he divided the estate among his brothers, including his share, and then burned all his father's promissory notes thus destroying all the debts owed to his family.

During the following years Macarius settled into an ascetic life at his hermitage on Chios, writing books, confessing and counseling people, and being an encourager of new martyrs.

In September 1804, Abp. Makarius suffered a stroke that left his right hand paralyzed. On April 17, 1805, he died at the hermitage of St. Peter in Chios.