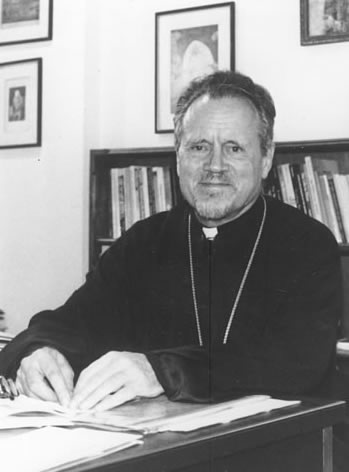 Born in Neuilly-sur-Seine, France, on February 17, 1926, Protopresbyter John Meyendorff completed his secondary education in France and his theological education at the St. Sergius Orthodox Theological Institute (Paris, France) in 1949. In 1948 he also received a license-es-lettres at the Sorbonne, and later earned a Diplôme d'études supérieures (1949), a Diplôme de l'école practique des Hautes Etudes (1954), and a Doctorate of Letters (1958).

In France he was an Assistant Professor of Church History at the Orthodox Theological Institute, and a Fellow at the Centre National de la Recherche Scientifique.

Having been ordained to the priesthood in the Orthodox Church, he became Professor of Church History and Patristics at St. Vladimir's Orthodox Theological Seminary (Crestwood, New York) (1959), holding also successive joint appointments as lecturer in Byzantine theology at Harvard University, Dumbarton Oaks (to which he returned for a semester as Acting Director of Studies in 1977), and as Professor of Byzantine History at Fordham University (from 1967). He also was Adjunct Professor at Columbia University and Union Theological Seminary and lectured widely on university campuses and at church events. He held the position of Dean of St Vladimir's Seminary from March 1984 until June 1992.

Fr Meyendorff was a member of several professional associations, serving during different periods as President of the Orthodox Theological Society of America, President of the American Patristic Association, and a member of the Executive Committee, U.S. Committee for Byzantine Studies. He was a Fellow of the National Endowment for the Humanities (1976-77), and a Guggenheim Fellow (1981).

During his service at the seminary, he held the positions of librarian, director of studies, and was long-time editor of St Vladimir's Theological Quarterly. His service to the church included positions as chairman of the Department of External Affairs of the Orthodox Church in America, as advisor to the Holy Synod, and as editor of the monthly newspaper The Orthodox Church. He was rector of Christ the Savior Church in Manhattan from 1977-1984

As a representative of the Orthodox Church, he participated in the activities of the World Council of Churches, having been Chairman of the Commission on Faith and Order (1967-1976) and a member of the Central Committee. Committed particularly to inter-Orthodox unity and cooperation, he was one of the founders and the first general secretary of Syndesmos (World Fellowship of Orthodox Youth Organizations), and served later as its president.

Fr Meyendorff held honorary doctorates from the University of Notre Dame and General Theological Seminary, and was a Corresponding Fellow of the British Academy.

He was a Senior Fellow at Dumbarton Oaks. The Diploma of Honorary Member of the Leningrad Theological Academy was bestowed upon Fr John in May of 1990. In June 1991 Fr John was awarded the Order of St Vladimir, 2nd Class, by His Holiness Alexei II, Patriarch of Moscow and All Russia.

From the 9th until the 11th of February, 2012, St. Sergius Orthodox Theological Institute (Paris, France) will hold an International Conference to commemorate the twentieth anniversary of the falling asleep in the Lord of Protopresbyter John Meyendorff. For a complete description of the international conference, including the detailed program and registration form, visit the Conference blog and the Website of St. Sergius Orthodox Theological Institute.