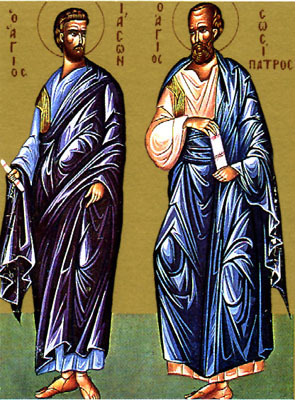 The holy, glorious, all-laudable Apostle Sosipater is numbered among the Seventy Apostles. St. Sosipater's feast days are on April 28 (Slavic tradition), or 29 (Greek tradition) with St. Jason; November 10 with Ss. Erastus, Olympas, Herodian, Quartus and Tertius; and January 4 with the Seventy.

Born in Achaea, he was Bishop in Iconium (prior to the Apostle Tertius) by his relative the Apostle Paul. With the Apostle Jason he traveled to the island of Corfu where they built a church in honor of the Apostle Stephen the Protomartyr and converted many pagans to the Christian faith. Seeing this, the king of Corfu threw them into prison where they converted seven other prisoners to the Christian faith: Saturninus, Jakischolus, Faustianus, Januarius, Marsalius, Euphrasius and Mammius. The king had those seven put to death for their faith in boiling pitch.

Illumined by divine light, O holy apostles,
you wisely destroyed the works of idolatry.
When you caught all the pagans you brought them to the Master
and taught them to glorify the Trinity.