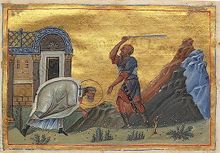 Apostle Quadratus - miniature from the Menologion of Basil II

The holy, glorious, all-laudable Apostle Quadratus (or Codratus) of the Seventy was Bishop of Athens and a disciple of the Apostles. He is commemorated by the Church on September 21 and on January 4 with the Seventy.

St. Quadratus preached at Athens and at Magnesia, an eastern peninsula of Thessaly. He converted many pagans to Christianity. Many hated him for this, and pelted the saint with stones. Preserved by God, St. Quadratus remained alive, but was imprisoned, and died of starvation. His holy body was buried in Magnesia.

St. Quadratus is known for an Apologia in defense of Christianity of which only a fragment remains. The Apologia affected the persecution of Christians, since the Emperor Hadrian (117-138) issued a decree saying that no one should be convicted without just cause.

O Holy Apostle Quadratus
Pray to our merciful God
That He may grant to our souls
Remission of our transgressions.