The holy, glorious and all-laudable Apostle Timothy (died AD 80) was a first century bishop. His feast is celebrated on January 22. His name, from Greek Τιμοθεος, means "honoring God." 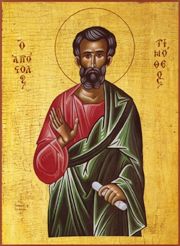 St. Timothy was Paul's companion in many of his journeyings. His mother, Eunice, and his grandmother, Lois, are mentioned as eminent for their piety (II Timothy 1:5). We know nothing of his father but that he was a Greek (Acts 16:1). He is first brought into notice at the time of Paul's second visit to Lystra (Acts 16:2), where he probably resided, and where it seems he was converted during Paul's first visit to that place (I Timothy 1:2; II Timothy 3:11). The apostle having formed a high opinion of his "own son in the faith," arranged that he should become his companion (Acts 16:3), and took and circumcised him, so that he might conciliate the Jews. He was designated to the office of an evangelist (1 Tim. 4:14), and went with Paul in his journey through Phrygia, Galatia, and Mysia; also to Troas and Philippi and Berea (Acts 17:14). Thence he followed Paul to Athens, and was sent by him with Silas on a mission to Thessaloniki (Acts 17:15; I Thessalonians 3:2). We next find him at Corinth (I Thessalonians 1:1; II Thessalonians 1:1) with Paul. He passes now out of sight for a few years, and is again noticed as being with Paul at Ephesus (Acts 19:22), whence he is sent on a mission into Macedonia. He accompanied Paul afterwards into Asia (Acts 20:4), where he was with him for some time. When the apostle was a prisoner at Rome, Timothy joined him (Philemon 1:1), where it appears he also suffered imprisonment (Hebrews 13:23). During Paul's second imprisonment he wrote to Timothy, asking him to rejoin him as soon as possible, and to bring with him certain things which he had left at Troas, his cloak and parchments (II Timothy 4:13).

According to tradition, Paul ordained Timothy Bishop of Ephesus in AD 65, where he served for 15 years. In 80, Timothy tried to halt a pagan procession of idols, ceremonies, and songs. In response to his preaching of the Gospel, the angry pagans beat him, dragged him through the streets, and stoned him to death. In the 4th century, his relics were transferred to the Church of the Holy Apostles in Constantinople. The Church also numbers Timothy among the 70 apostles sent out by Jesus Christ to preach the Gospel.

Two books of the New Testament bear his name: I Timothy and II Timothy. These are addressed to St. Timothy and traditionally attributed to the Apostle Paul.

Thou didst learn kindness and goodness
and wast sober and temperate in all things,
and wast clothed with a good conscience as becomes a holy person.
Thou didst draw from the Chosen Vessel unspeakable mysteries;
and having kept the Faith thou didst finish thy course, O Apostle Timothy.
Intercede with Christ our God that our souls may be saved.

Let us the faithful praise the Holy Apostle Timothy,
the companion of Paul in his travels and together with him
let us honor the wise Anastasius, who came as a star from Persia
for the healing of the passions of our souls and the diseases of our bodies