Apostle Philip (of the Twelve) 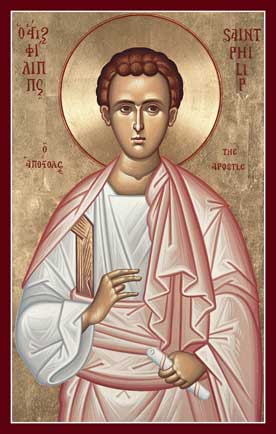 The holy, glorious, all-laudable Apostle Philip was one of the Twelve Apostles of Jesus Christ. The Church remembers St. Philip on November 14. He was not the St. Philip (October 11) who was one of the Seventy Apostles.

Born in Bethsaida beside the Sea of Galilee, Philip was so well versed in the Holy Scriptures that he immediately recognized Jesus as the Messiah upon seeing him the first time. After Pentecost, St. Philip preached in Asia and Greece. In Greece, the Jews hated him and the high priest even ran at him to club him to death, but miraculously this Jewish priest was blinded and turned completely black. Then the earth opened up and swallowed him. Many of the sick were healed, and many pagans believed.

St. Philip found himself in the company his sister Mariamma, the Apostle John and the Apostle Bartholomew while preaching in Hieropolis. Through prayer he killed a giant snake that the pagans worshipped, which angered the unbaptized so much that they crucified him and St. Bartholomew upside-down. Again, the earth opened and swallowed his judge along with many pagans, and being terribly afraid the people rushed to bring the Apostles down from their torment. But St. Philip had already reposed.

St. Bartholomew then ordained Stachys—whom St. Philip had healed of a forty-year blindness and baptized—as bishop for those who were baptized in that area. Later, St. Philip's relics were translated to Rome. He is numbered among the Twelve Great Apostles.

The tomb of St. Philip was unearthed in a great discovery in the Denizli province of Turkey in 2011. The discovery took place at the Hierapolis (Pamukkale) ancient excavation site of Denizli in western Turkey on Tuesday 26 July 2011. The excavation has been going on in the area for some 32 years led by the Italian Prof. Francesco D’Andria. Prof D’Andria gave the news of the great discovery on Tuesday, saying: [i]"The discovery of the tomb of St Philip, who is a very important figure for Christianity, will make a tremendous impression in the world,"[/i] shortly after the great success of his team.

Up till now, people believed that the tomb of St. Philip was in the back hill of Hierapolis, but Italian Archaeologist Francesco D’Andria and his team discovered a new church ruin near 40 meters of the hill and the real tomb of St. Philip the Apostle is in the church.

Your disciple, friend and imitator of Your passion,
the God-preaching Philip, proclaimed You to the universe!
By his prayers deliver Your Church from her enemies;
through the Theotokos protect every city, most merciful Christ!