From OrthodoxWiki
(Redirected from Andronik of Perm)
Jump to: navigation, search 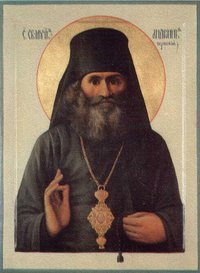 Hieromartyr Andronik of Perm
St. Andronik was born Vladimir Nikolsky on August 1, 1870, in Povodnevo, a village in Myshkin uyezd, Yaroslavl diocese. His father was a deacon. After finishing studies at the Yaroslavl Seminary in 1891, he entered the Moscow Theological Academy. On August 1, 1893, during his studies in Moscow he was tonsured a monk and given the name of Andronik. On July 22, 1895, he was ordained to the priesthood.

After graduation, he was assigned as inspector and instructor, first, to the theological seminary of Kutaisi in the Caucasus and then at the seminary at Ardon.

In 1897, he was assigned to the Russian Orthodox mission to Japan, under Bishop Nicholas (Kasatkin), later known as St. Nicholas of Japan, to assist in the missionary work that he began in 1861. Hieromonk Andronik was very surprised by this assignment and felt inadequate for the position, but ultimately he accepted it as God's will. His journey began in St. Petersburg on September 21, 1897, and then continued from Odessa with Archimandrite Sergius (Stragorodsky) on October 26. Traveling through European countries and the U.S.A. then on to Japan, they arrived in Japan on December 26. He wrote and published a book about this journey, A Missionary Journey to Japan (Kazan, 1899). 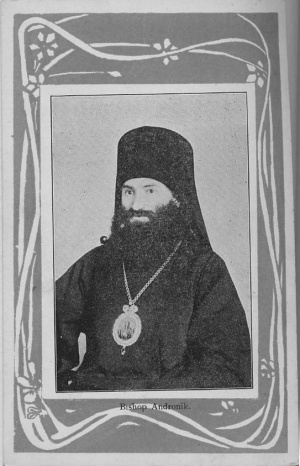 Hieromartyr Andronik of Perm as Bishop of Kyoto (1907)

On November 5, 1906, Andronik was consecrated bishop of Kyoto and assistant to Bp. Nicholas. He was the first bishop of Kyoto, which is the seat of the West Japan diocese of the Orthodox Church of Japan. Although Bishop Andronik was the bishop of Kyoto, he lived in nearby Osaka which, while it then was the second largest city in Japan, was also the area where most Orthodox faithful lived. After he arrived in Osaka, he began to feel ill and found performing his duties difficult. After serving in Osaka for three months he asked leave to resign and to depart from Japan, and on May 27, 1907, he left Japan and returned to Russia. There he was assigned on October 26 to be the deputy to Bishop Eulogius of Kholm. In 1908, he was assigned as bishop of Tikhvin in Novgorod diocese.

Bp. Andronik was a firm supporter of the Tsar. From his point of view it was God's will to let him reign over the empire, and thus that monarchy was the appropriate way for Christians. But this did not mean he supported tyranny. Rather, the Tsar should listen to his people so that all may have peace.

On July 30, 1914, he was appointed bishop of Perm and Solikamsk. Eleven days before, on July 19, World War I began. As the war progressed he worked energetically for the 1.5 million inhabitants and 570 churches in the region.

In summer 1916 he travelled to the army headquarters outside St. Petersburg where Tsar Nicholas II was leading the Russian Army. The purpose of the trip was to warn the Tsar about Rasputin. However, the Tsar would not take him seriously, and his trip failed. But Nicholas II was pleased with the gift Andronik gave him on behalf of his people, a pair of soldier's boots like those the province of Perm provided the army.

In 1917, he became Bishop of Perm and Kungur and became one of the seven hierarchs in the pre-conciliar council of the Local Council of the Russian Church in Moscow. He was active throughout the council, from August 1917 until April 1918, which was the end of its second session. As the agitation of the Bolshevik take-over intensified on January 25, 1918, Adronik made a written appeal to the faithful to defend the heritage of the Church from the aggressors and looters, as attacks became more frequent.

In February, Bolsheviks in the Perm region started to loot churches and monasteries. After the second session of the council ended, Andronik returned to Perm. Patriarch Tikhon had raised him to the rank of archbishop on April 12, Palm Sunday. On Holy Thursday, April 16, the Bolsheviks carried out a search of his residence. He remained calm and continued the Holy Week services and that of Pascha.

The Bolshevik authorities increased pressure on the Church in the following weeks. Finally Abp. Andronik was arrested at midnight on July 17. Clergy in Perm went on strike from the night he was arrested until July 26, halting all divine services in the region except baptism and the last rites for the dying. But, on July 7, 1918, Abp. Andronik was martyred, being buried alive and shot.

In 2000, the Church of Russia glorified him as Hieromartyr Andronik, Archbishop of Perm, one of Russia's New Martyrs and Confessors.