His Eminence the Most Reverend Metropolitan Theodosius (Nagashima) of Japan was the first Japanese man to be the ruling bishop of the Church of Japan.

He was born Nagashima Shinji on April 3, 1935, in Tokyo. He was attracted to the Orthodox Church through hearing the choir singing in Nicolai-do when he passed the cathedral during his student days. In the event, as he learned more about Orthodox Christianity he was baptized and became a member of the choir, that was led by Victor A. Pokrovsky, and began attending the Tokyo seminary. He graduated from the seminary in April 1963. 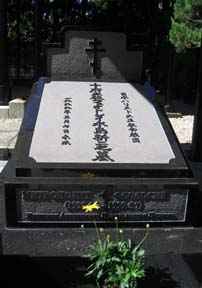 Grave of Metr. Theodosius in the Yanaka Cemetery, Tokyo, Japan

He was ordained a deacon in 1964 and a priest in 1965. Continuing his education, he studied at St. Tikhon's Orthodox Theological Seminary (South Canaan, Pennsylvania) for a year before returning to Japan. Upon returning he took monastic vows in October 1969 before Archbishop Vladimir, then the ruling bishop of the Church of Japan, receiving the name of Theodosius. In November, he was raised to the dignity of archimandrite and nominated for bishop. On November 18, 1969, Archbishops John (Shahovskoy) of San Francisco (Metropolia) and Vladimir (Nagosky) of Tokyo consecrated Theodosius bishop of Kyoto. With his appointment as bishop of Kyoto he established his residence in Osaka which is near the old imperial city of Kyoto.

Under the guidance of Metropolitan Theodosius, the Church of Japan continued its course of stabilization and growth through the rest of the twentieth century. He died on May 9, 1999, to be succeeded by Metropolitan Daniel (Nushiro) of Japan[1].