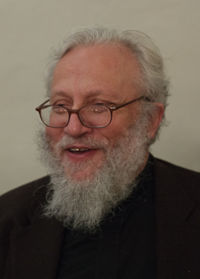 His Grace, the Right Reverend Bishop Seraphim (Sigrist) of Sendai is a retired bishop of the Church of Japan.

Joseph Sigrist was born on December 13, 1941, in Nyack, New York, and grew up a Presbyterian in Pleasantville, New York. Joseph was educated at Nyack College and, on completing his degree, was received into the Orthodox Church. Subsequently, he studied at St. Vladimir's Orthodox Theological Seminary.

After he graduated in 1967, Joseph left New York for Japan in September of that year, where he was employed within the Church of Japan as an English-language teacher, and as a deacon at the Toyohashi parish. He was then tonsured a monk by Archbishop Vladimir on October 18, 1969, taking the name of Seraphim, ordained to the priesthood and, a week later, elevated to archimandrite. He became the parish priest in Nakanida.

In Tokyo, on December 19, 1971, he was consecrated Bishop of Sendai and East Japan. Sendai is a city in northern Japan on the coast of the Pacific Ocean. Bishop Seraphim served in this capacity for 19 years, returning to the United States in 1987. In the United States, he taught in the graduate department of religion at Drew University, wrote three books, and visited Russia frequently in support of mission, especially to youth in Russia. He also assisted the ministry of the Hosanna Community in Russia (part of Fr Alexander Men's legacy). He maintains a very active online journal.

In 2009, twenty-two years after his return to the United States, Bishop Seraphim was added to the list of retired bishops of the Orthodox Church in America.[1]