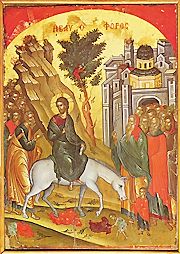 Palm Sunday, also called the Triumphal Entry, is one of the Great Feasts of the Orthodox Church, celebrated on the Sunday before Pascha. On this day the Church celebrates the entry of Jesus into Jerusalem in the days before the Jewish Passover. A mere few days before His crucifixion, Jesus Christ was received by adoring throngs at his entry into Jerusalem on the back of a young donkey. The believers meet him, and spread out before him his clothes and olive branches. When He and His students approached the city Jerusalem, He ordered them to go to the near-by village, and bring him the donkey and his little who were tied-up in the beginning of the village. If they were asked, they should say that this was God's will. When the people knew that the donkey was for Jesus, they did not prevent his students. They gave Him the donkey, and He solemnly entered Jerusalem. The news of the resurrection of Lazarus already got ahead and thousands of people went to Bethany to meet him.

The Orthodox celebrate this day with joy, but with the realization that very sad events are soon to come. Orthodox peoples who live in areas without palms, including the Russian Orthodox, use pussy willow branches rather than palms in the celebration of this event. Therefore in Russian Church this feast and is called Вербное (Pussy Willow) Воскресенье (Sunday). Some churches give small crosses made of palms at the end of the service and are then kept in the home icon corner.

Fasting is modified because of the triumphant nature of Palm Sunday, and fish is permitted. Fried cod with garlic sauce and fried vegetables is a traditional dish, but any fish may be served.

When we were buried with You in Baptism, O Christ God,
We were made worthy of eternal life by Your Resurrection!
Now we praise You and sing:
Hosanna in the highest!
Blessed is He that comes in the Name of the Lord!

Sitting on Your throne in heaven,
Carried on a foal on earth, O Christ God!
Accept the praise of angels and the songs of children who sing:
Blessed is He that comes to recall Adam!