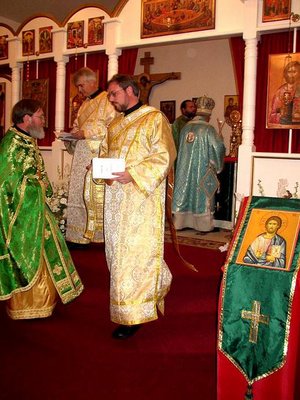 Clergy L to R: priest, two deacons, and a bishop

Clergy is the generic term used to describe the formal religious leadership within the Orthodox Christian Church. The term comes from Greek κλήρος (a lot, that which is assigned by lot (allotment) or metaphorically, heritage).

Clergy in the Orthodox Church are those individuals set aside to perform certain tasks and/or exercise certain authority in the life of the Church. Orthodox clergy take care of the ritual aspects of the religious life of the Church, teach, or otherwise help in spreading Orthodox doctrine and practices. They often deal with life-cycle events such as child birth, baptism, marriage, and death. Clergy work both inside and outside houses of worship, and can be found working in hospitals, nursing homes, missions, armed forces, etc.

There is a significant difference between clergy and theologians; clergy have the above-mentioned duties while theologians are scholars of religion and theology and are not necessarily clergy. A layperson can be a theologian. The two fields, of course, often overlap. The clergy status in the Orthodox Church is reserved for males.

In countries and societies where Orthodoxy has special status governed by special laws, i.e., are "state religions," the clergy may be financed (or co-financed) by the state, but usually they are supported financially by donations of individual Orthodox Christian members.

The term "clergy" as generally used in the Orthodox Church applies to those who are members of the major orders and are ordained. Those who assist the clergy in the services of the church and are tonsured are referred to as members of the minor orders.

Those of the major orders are the bishops, priests, and deacons, the same offices identified in the New Testament and found in the early church. Bishops include archbishops, metropolitans, and patriarchs. Priests (also called presbyters or elders) include archpriests, protopresbyters, hieromonks (priest-monks) and archimandrites (senior hieromonks). Deacons also include hierodeacons (deacon-monks), archdeacons, and protodeacons.

Bishops are usually drawn from the ranks of the monks and are required to be celibate. A non-monastic priest may be ordained to the episcopate if he no longer lives with his wife (following Canon XII of the Quinisext Council). In contemporary usage such a non-monastic priest is usually tonsured to the monastic state at some point prior to his consecration to the episcopacy. Priests, deacons, and subdeacons may be married, provided that they are married before their ordination to the subdiaconate (though in practice subdeacons in many places do marry after ordination). If they are later divorced and then desire to remarry, they are not permitted to remarry unless they first leave the clergy and return to lay status. All Orthodox clergy must be male.

There are records of deaconesses in the New Testament and in the early Church until the fall of Constantinople. Many Church historians consider this office was never equivalent to that of deacon, but had separate responsibilities. More recent research suggests female deacons exercised a similar role to male deacons in at least some places. The ancient office of deaconess is still present in various jurisdictions of the Orthodox Church and is often the immediate precursor to the office of abbess.

Those in the minor orders are subdeacons and readers who are tonsured and attendants (acolytes). The latter two of these offices are not restricted from marriage.

The typical progression of ordination is: reader, subdeacon, deacon, priest, bishop. Each ordination must take place in that order, although it is possible to ordain a layman to all five offices in the course of three days.

The organization of the Orthodox Church is both hierarchical and conciliar (or synodal). It is hierarchical in that priests, deacons, and laymen are expected to follow their bishop and to do nothing without their bishop, in that Jesus Christ is the head of every bishop. It is conciliar or synodal in that there is no single superior position whom all the bishops follow, but rather the bishops meet together in synods or councils and reach binding agreements through consensus. A bishop, even the patriarch, is bound to obey the decisions of his synod. A council with representatives from all the churches is an ecumenical council.

Although Orthodox clergy are given considerable honor by the Orthodox Church, each ordination is also viewed as a kind of martyrdom. The Orthodox cleric agrees to be a servant of both Jesus Christ and of the people of the church; many of the vestments are intended to remind him of this. Much is expected of the clergy, both practically and spiritually; consequently, they also have a special place in the litanies that are prayed, asking God to have mercy on them.

There is no set universal rule for the training of clergy, and there is some variation from place to place. Traditionally, candidates for the priesthood either reside with their bishops for a certain period and are given personal instruction by him, or, if they are monks, receive instruction by obedience to their monastic superiors. Modern practice in most places is for them to be trained at a seminary, which may be associated with a monastery. The course of study generally runs for about three years and an undergraduate degree is often a requirement for admission. Instruction is given in dogmatics, theology, ecclesiastical history, canon law, liturgics, Biblical studies, and other subjects, although emphasis varies from institution to institution. Graduation from a seminary is no guarantee of ordination, however; this is solely at the discretion of the diocesan bishop. Requirements for the training of those who intend to remain in the diaconate are often less rigorous than for priests.