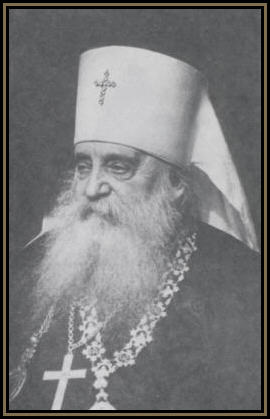 Metropolitan Anthony was born Alexei Pavlovich Khrapovitsky on March 17, 1863, in Vatagino village of Kresteski district of Novgorod province, Russia. His parents were members of the Russian nobility. He was educated at St Petersburg, Russia, where he finished the 5th Classical Gymnasia with a gold medal. He owes the beginnings of his religious education to his mother and the influence of Fyodor Dostoevsky, the reading of Church Fathers and the Lives of Saints as well as interest in the ideas of the slavophile movement. In his young years, he was interested by the work of V. S. Solovyev, whom he later criticized for pro-Roman Catholic leanings. A final important influence was meeting St Nicholas, the enlightener of Japan.

In 1881, despite the opposition of his father, Alexei enrolled in the St Petersburg Theological Academy, where he became friends with M. M. Gribanovsky, the future Bishop of Tauria, who was the first of the academy students to become a monastic after a 20-year hiatus in tonsurings. This friendship strengthened Alexei's desire to serve the Church as a learned monk. In his third year, he worked on his master's dissertation "Psychological data in favour of free will and moral responsibility" with the oversight of A. Ye. Svetilin.

Before graduating, Alexei was tonsured on May 18, 1885, with the name of Anthony. That same year, he finished at the Academy and received his diploma. On June 12, he was ordained hierodeacon and on September 29, hieromonk. He then remained at the Academy as part of the teaching staff. In 1886-1887, he was appointed to teach homiletics, liturgics, and canon law at the Kholm Theological Seminary. In 1887-1889, Hieromonk Anthony was an instructor at the Academy in the department of Old Testament Studies and beginning in 1889 served as the Academy's inspector. A result of this work was his 1890 book "An Exegesis of the Book of the Prophet Micah."

In 1888, as a result of reworking his dissertation, Hieromonk Anthony was awarded the degree of Master of Theology. In 1888 and 1889, he taught a course on introduction to theological sciences. At around the same time, he became friends with St John of Kronstadt. In 1890, he was appointed as rector of the St Petersburg Theological Academy and raised to the rank of archimandrite. In 1891, he was appointed rector of the Moscow Theological Academy. This time marked his blossoming as a theologian, with the publication of his work "The moral idea of the dogma of the Holy Trinity" (report at the festivities marking the 500th anniversary of the repose of St Sergius of Radonezh). In 1893-1894, Archimandrite Anthony became friends with Archimandrite Sergius (Stragorodsky), the future Patriarch of Moscow and all Russia. Archimandrite Anthony persuaded Archimandrite Sergius to publish his master's dissertation, "The Orthodox Teaching on Salvation." He also met L. N. Tolstoy, whom he frequently attempted to bring back into the Church by critiquing his religious and philosophical ideas.

On April 22, 1902, Bishop Anthony was appointed to the Volyn and Zhytomyr cathedra, the largest diocese of the Russian Church at that time. The new energetic bishop worked to restore canonical order in the diocese, ending simony and bribery, promoting liturgical order and love toward the flock.

In 1907, Bishop Anthony headed a committee examining the Kiev Theological Academy. The committee's findings were unpopular with academy staff, leading to Bishop Anthony's publication of "The Truth about the Kiev Theological Academy" and the resignation of its rector, Bishop Platon (Rozhdestvesky), the future head of the American Metropolia. Many believe that this incident led to the subsequent antagonism among the emigré bishops, which resulted in the split between the Russian Orthodox Church Outside Russia (ROCOR) and the Orthodox Church in America (OCA).

In 1906-1907, Bishop Anthony was member of the State Council and in 1912-1916 of the Holy Synod. He worked on the preparation for a Local Council of the Russian Church; he responded to the 1905 questionnaire of Russian bishops by calling for the restoration of the patriarchy and the reform of theological education and other reforms in Church administration.

By the ukase of the Synod on May 19, 1914, Bishop Anthony was appointed to the Kharkiv and Aktyr cathedra. After the February 1917 Revolution, he was forced to ask for retirement because of poor relations with the new authorities in his area and the discontent of certain members of his clergy. On May 1, 1917, he was retired and assigned to the Valaam Monastery, where he wrote his book "The Doctrine of Redemption," which later caused many arguments among Orthodox theologians. In August of 1917 he was again elected Archbishop of Kharkiv and Akhtyr by the Diocesan council of Kharkiv.

In 1917-1918, he was a member of the Local Council of the Russian Church, where he was a staunch supporter of restoring the patriarchy. His candidacy received the largest number of votes—159—but on November 5, 1918, Patriarch St. Tikhon of Moscow was elected by lot. On November 28, Archbishop Anthony was raised to the rank of metropolitan and on December 7 elected a member of the Holy Synod headed by Patriarch Tikhon.

In January 1918, Metropolitan Anthony was present at the All-Ukrainian Church Council in Kiev. He then fled the city before the Bolshevik invasion. Following the killing of New Hieromartyr St. Vladimir (Bogoyavlesky) of Kiev, Metropolitan Anthony was elected to the Kiev cathedra, and returned when the city was occupied by the Germans. However, his election was not approved by the authorities because of his opposition to Ukrainian autocephaly.

In December 1918, together with Archbishop Eulogius of Volyn, he was arrested by the Symon Petliura government. The two hierarchs were held at the Uniate monastery in Buchacha. In the spring of 1919, when Buchacha was taken by Polish forces, they were transferred to the vicinity of Krakow. In the summer of 1919 they were freed through the work of the French diplomatic mission. Metropolitan Anthony lived in L'viv. In September 1919, he left for Kuban, then returned to Kiev, which was held by White forces of General Denikin. After Kiev was retaken by Bolsheviks in November, he left for Yekaterinodar, where he was elected as president of the Temporary Higher Church Authority of South-East Russia. After the defeat of the Denikin army, he left for Greece, where he received the support of Archbishop Meletius (Metaxakis) of Athens. In September 1920, he returned to Crimea, which was controlled by General Wrangel. After the latter's defeat in November, he left Russia for the last time.

Between November 1920 and February 1921, Metropolitan Anthony was in Constantinople. At first he decided that the Temporary Authority should be abolished and pastoral care for displaced Russians handed over to other local churches. However, after learning of the decision of General Wrangel to retain his army for further battle with the Bolsheviks, Metropolitan Anthony decided to keep the Church organization abroad. The Temporary Authority met on November 19, 1920, aboard the ship "Great Prince Alexader Mikhailovich," presided over by Metropolitan Anthony. He and Bishop Benjamin (Fedchenkov) were appointed to examine the canonicity of the organization. On December 2, 1920, they received permission from Metropolitan Dorotheos of Prussia, Locum Tenens of the Ecumenical Patriarchate, to establish "for the purpose of the service of the population ... and to oversee the ecclesiastic life of Russian colonies in Orthodox countries a temporary committee (epitropia) under the authority of the Ecumenical Patriarchate"; the committee was called the Temporary Higher Church Administration Abroad (THCAA). In February 1921, at the invitation of Patriarch Dimitry of Serbia, the THCAA relocated to Serbia, where, on August 31, 1921, the Council of Bishops of the Serbian Orthodox Church decided to take the organization under its protection as an independent jurisdiction for displaced Russians.

With the agreement of Patriarch Dimitry, the "General assembly of representatives of the Russian Church abroad" took place between November 21 and December 2, 1921, in Sremsky Karlovtsi, Serbia. It was later renamed the First All-Diaspora Council and was presided over by Metropolitan Anthony. The Council established the "Supreme Ecclesiastic Administration Abroad" (SEAA), composed of a patriarchal Locum Tenens, a Synod of Bishops, and a Church Council. The Council decided to appoint Metropolitan Anthony the Locum Tenens, but he declined to accept the position without permission from Moscow and instead called himself the President of the SEAA. However, an Ukase of Patriarch St. Tikhon of Moscow, dated May 5, 1922, abolished the SEAA and declared the political decisions of the Karlovtsy Council as not reflecting the postion of the Russian Church. Meeting in Sremsky Karlovtsy on September 2, 1922, the Council of Bishops agreed to abolish the SEAA, in its place forming the Temporary Holy Synod of Bishops of the Russian Orthodox Church Outside Russia with Metropolitan Anthony as its head by virtue of seniority. The Synod exercised direct authority over Russian parishes in the Balkans, the Middle East, and the Far East. In North America, however, a conflict erupted with those who did not recognize the authority of the Synod, led by Metropolitan Platon (Rozhdestvensky); this group formed the American Metropolia, the predecessor to the OCA. Likewise, in Western Europe, Metropolitan Eulogius (Georgievsky) also did not recognize anything more than "a moral authority" of the Synod. Metropolitan Eulogius later broke off and joined the Ecumenical Patriarchate, forming the Patriarchal Exarchate for Orthodox Parishes of Russian Tradition in Western Europe, known colloquially as the Rue Daru.

Metropolitan Anthony presided over another meeting of the Council of Bishops of ROCOR in June 1926. The bishops decided to accept Metropolitan Peter (Polyansky) of Krutitsa as the lawful Locum Tenens following the repose of St. Tikhon. The Council once again called for Metropolitans Platon and Eulogius to accept its jurisdiction.

During the course of his time abroad, Metropolitan Anthony continued to retain the title of Metropolitan of Kiev and Galicia, an action recognized by Metropolitan Peter (Polyansky) of Krutitsa, who refused pressure from Soviet authorities to fill the vacant Kiev cathedra. In March 1931, the Synod of Bishops awarded him the title of "Beatitude." In August 1932, Metropolitan Anthony proposed the election of a deputy president. The Bishops elected Archbishop Anastasy (Gribanovsky) of Kishinev, who was elevated to the rank of metropolitan in 1935. In 1935, the Council of Bishops of ROCOR, under the leadership of Metropolitan Anthony, condemned as heretical the teaching of Archpriest Sergius Bulgakov about Sophia, the Wisdom of God. This furthered the antagonism between ROCOR and the Western European Exarchate, where Father Sergius worked at the St. Sergius Orthodox Theological Institute (Paris, France).

Metropolitan Anthony reposed on August 10, 1936, in Sremsky Karlovtsi, Serbia, and was buried in Belgrade at the Iveron Chapel in the Russian cemetery. Patriarch Varnava officiated at the Divine Liturgy, Panikhida and burial services.

Metropolitan Anthony was a remarkable writer, author of many works in apologetics, dogmatic, pastoral and moral theology, hermeneutics, canon law and other disciplines. His ecclesiological opinions were influenced by A. S. Khomiakov; from Khomiakov's view of the dogma of One Church, Metropolitan Anthony concluded that all heterodox churches were not part of the Church. He allowed the reception of converts through confession and chrismation strictly on the grounds of economy. Yet he taught that Orthodox bishops could receive Anglican clergy of that time merely by penance "in existing orders."

He was opposed to Latin influence on the Church, and felt the Greater and Lesser Catechisms of the seventeenth century are "only by a misapprehension are called Orthodox."

We must think that during that night at Gethsemane, the thoughts and feelings of the Godman encompassed all fallen men in their many billions, and wept with loving grief for all of them individually, which, of course, was only possible to the Divine, all-knowing heart. This was our atonement ... We are sure that the terrible sufferings of the Saviour at Gethsemane took place while beholding the sinful life and sinful nature of all human generations and that the words of the Lord "Let this cup pass from me" are not pointed to his upcoming Crucifixion and death, but to this, completely depressing to Him, feeling of profound grief for the sinful human race so beloved by Him.