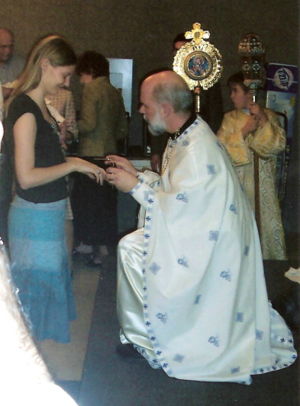 Unlike in the Western churches (e.g., Roman Catholic and Anglican), where confirmation is typically reserved to those of "the age of reason," chrismation in the Orthodox Church (as well as the Eastern Rite Catholic Churches) is normally administered immediately after baptism and immediately (or at least shortly) before one's first reception of Holy Communion.

Chrismation is practiced by anointing the new Christian with chrism, which is holy oil (Gk. myron). The myron is a "mixture of forty sweet-smelling substances and pure olive oil" (Gialopsos, 35). The Christian is anointed with this oil in the sign of the Cross on his forehead, eyes, nostrils, mouth, ears, chest, hands and feet. Each time, the priest administering the sacrament says, "The Seal and Gift of the Holy Spirit."

The sacrament of chrismation is an extension of the day of Pentecost, on which the Holy Spirit was poured out on the Apostles. It is by Chrismation that a person becomes a layperson—a member of the laos, the people of God. Bishop Kallistos (Ware) of Diokleia explains:

Through Chrismation every member of the Church becomes a prophet, and receives a share in the royal priesthood of Christ; all Christians alike, because they are chrismated, are called to act as conscious witnesses to the Truth. 'You have an anointing (chrisma) from the Holy One, and know all things' (I John 2:20) (Ware, 279).

Although normally administered in conjunction with baptism, in some cases chrismation alone may be used to receive converts to Orthodoxy through the exercise of economia. Although practice in this regard varies, in general (especially in North America) if a convert comes to Orthodoxy from another Christian confession and has previously undergone a rite of baptism by immersion in the Trinitarian Formula ("in the Name of the Father, and of the Son, and of the Holy Spirit"), he or she may be received into the Orthodox Church through the sacrament of chrismation, after which receiving the Holy Eucharist. If, however, a convert comes from a Christian confession that baptizes in the Name of "Jesus only" (such as some Pentecostal churches) or from one that does not practice baptism at all (such as Quakers and the Salvation Army), baptism is a prerequisite for chrismation. The use of economia is at the discretion of, and subject to the guidelines imposed by, the local bishop.

Although some non-Orthodox Christians level the charge that the sacraments other than baptism and Eucharist are not Biblically based, but rather human traditions, this is not so. The sacrament of chrismation can be observed in the New Testament.

The Acts of the Apostles show us that a sort of confirmation was going on even in the early Church. As the Christian community expanded both numerically and geographically into many locations both within and outside of the Jewish world, the Apostles were soon not the only ones preaching the Gospel and Baptizing people into Christ.

St. Paul's work in Ephesus is recounted in Acts 19.1-12. Here we see that some who had been baptized with the "baptism of John (the Baptist)" were eager to accept Christ.

When they had heard this, they were baptized in the name of the Lord Jesus. (Verse 5, NAB)

After this, we see that Paul "laid [his] hands on them" and the "Holy Spirit came upon them" (verse 6)

Another instance of confirmation in the early Church is seen in Acts 8:

Now when the apostles in Jerusalem heard that Samaria had accepted the word of God, they sent them Peter and John, who went down and prayed for them, that they might receive the Holy Spirit, for it had not yet fallen upon any of them; they had only been baptized in the name of the Lord Jesus. Then they laid hands on them and they received the Holy Spirit. (Acts 8.14-18, NAB)

Fr. Philip Gialopsos explains the further development of the Sacrament:

Later on, as Christianity began to grow, it was impossible for the Apostles to be everywhere to perform the Sacrament by laying on their hands, so they gave the authority to their successors to administer the Sacrament by anointing the baptized with Myrrh (Myron Oil). (Gialopsos, 35)