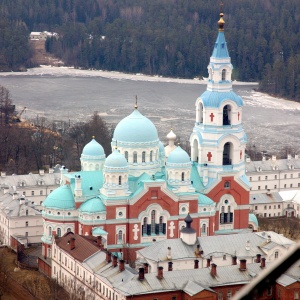 Valaam Monastery of the Transfiguration of the Savior, more popularly Valaam Monastery is a monastery of the Church of Russia located in Karelia in northwestern Russia on the island of Valaam in Lake Ladoga. The monastery was an outpost of evangelism in the north of Russia. In the 1790s the monastery provided the group of eight missionaries that was sent to Alaska in the North American northwest to evangelize the natives for Orthodox Christianity. This group of monastics included St Herman and St Juvenaly.

The origins of Valaam Monastery are not clear. Situated in the frontier of civilization the monastery was often attacked and burned as the area was contested by both Russians and Swedes. As the monastery is not mentioned in documents before the 16th century, different dates - from the 10th to 15th centuries - have been proposed for its founding. In Church tradition the founding of the Holy Transfiguration Valaam Monastery has been attributed to Ss. Sergius and Herman who were among the first missionaries to the city of Novgorod in the tenth century and created a monastery on Valaam Island in Lake Ladoga, north of Novgorod.

In the sixteenth century, Karelia became the battleground between Swedish and Russian forces as the Swedes pushed their borders eastward. Situated in Lake Ladoga, Valaam Monastery was in the midst of these struggles. In 1578, monks and novices were beaten to death by the (then) Lutheran Swedes. After another attack, the monastery was depopulated between 1611 and 1715. The buildings were burnt to the ground, and the Karelian border between Russia and Sweden was drawn through the lake. As the eighteenth century continued, the monastery recovered. Buildings were restored and built as the monastery prospered. By the beginning of the twentieth century the monastery had become very wealthy with about twenty smaller sketes under its control.

In 1793, the abbot of Valaam Monastery, Nazarius, was tasked by Catherine II with recruiting missionaries for the Russian colony in Alaska. A group of eight monks was assembled and departed Valaam on December 25, 1793 for Alaska. After a long journey through the length of Siberia the group arrived in Kodiak, Alaska on September 24, 1794.

In 1809, Sweden ceded Finland to Russia, which became an autonomous Grand Duchy. As the monastery was located in the Grand Duchy of Finland, when Finland gained its independence in 1917 Valaam became part of the Church of Finland. The Finnish Church became autonomous under the Church of Constantinople. During the Winter War between Finland and the Soviet Union in 1940, the monks from the monastery were evacuated to Heinavesi, Finland. With the end of the war the border was moved westward so that all of Lake Ladoga was within the Soviet Union. Having lost their former home, the monks who had moved to Finland formed the New Valaam Monastery at Heinavesi. It is the only monastery in the Finnish Church.

With the loss of its monastic community and the inclusion of Lake Ladoga in the Soviet Union the buildings of the original monastery on Valaam Island remained unused as a secular population moved on to the island. In time the island became a Soviet military base. As restrictions on the Orthodox Church in the Soviet Union eased during the 1980s, the original monastery was reactivated in 1989 and the facilities restored over the years.

In the late 1990s, Valaam Monastery gained significant legal power over the island under the Patriarch Alexei II. In an effort to return to a state of spiritual seclusion and enticed by the prospect of monopolizing the vast tourism industry on the island, the monastery forced many longtime residents to move out to the mainland. After years of fruitless legal proceedings, many residents of the island chose to leave rather than continue the fight, though a few still remain.

On May 1, 2016, the day of Pascha, a massive fire broke out in the historic "Winter Hotel" next to the main chapel. Although there are no casualties reported, between 50 and 70 people reportedly had to be evacuated, and an emergency fire-fighting helicopter needed to be deployed from St. Petersburg to fight the blaze. The hotel building dated back to the 1850s and was considered a national heritage site.

This was the same date on which St. Sava Serbian Orthodox Cathedral in New York City, USA burned as well as two more Orthodox Churches in Australia.