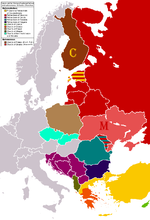 Autocephaly (literally "self-headed") is the status of a Local Church within the Orthodox Church whose primatial bishop does not report to any higher-ranking bishop. Autocephaly is granted when an ecumenical council or a high-ranking bishop, such as a patriarch or other primate, releases an ecclesiastical province from all obligations to any higher authority within the Orthodox Church, while remaining in full communion with the bishops of that province. Historically, autocephaly was obtained in a variety of ways. There are controversies regarding which historical methods of obtaining autocephaly represent a normative precedent to be followed in the future and which methods represent special exceptions.

Autocephaly refers to those Churches which are not, in any way, dependent upon any other Church, or Churches, for their life and mission. On the other hand, each and every Local Orthodox Church, regardless of its particular status, is responsible for the faith and life of the others. Therefore any action of any Church is subject to the review of the others in reference to its doctrine, morality, sacramental practices, and canonical order. This is just as each and every Orthodox Christian is responsible for each other.

Autocephaly is a developed practical concept in the Orthodox Church. That is, it is not part of the original organization of the Church but developed over time for practical reasons. Though many arguments are put forth regarding how autocephaly is properly obtained, the historical and canonical record shows a good deal of variation.

In Antiquity, certain areas developed for various reasons into self-governing Churches, with groups of bishops organizing themselves into synods or councils with a primate. These self-governing areas were then confirmed in their position by the others and recognized as such.

Some were simply recognized according to tradition (i.e., "small t" tradition), meaning that the bishops of certain prominent cities in the Roman Empire were recognized as primates over the surrounding regions, by virtue of the size of those cities, the importance and influence of the Christians living in them, and the tradition of honor accorded to them:

In other cases, autocephaly was granted by an Ecumenical Council:

Sometimes, autocephaly was granted by one mother Church to a daughter Church:

But there were also cases in which two different Churches both claimed to be the mother Church of the same daughter and both granted autocephaly to that same daughter Church, at different times:

In some cases, autocephaly was simply declared by the Church in question and then eventually recognized by the others:

Regardless of how a Church becomes autocephalous, the normal and historical procedure for a new autocephalous Church is to be formally recognized as autocephalous by the Church of which it was originally a part (the "mother Church"). Following that, it is to be formally recognized by all of the other Orthodox Churches in the world. This does not require the blessing of any single particular bishop and certainly not an official gathering of an Ecumenical Council.