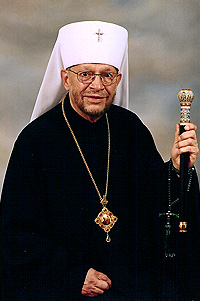 Metropolitan Theodosius was born in Canonsburg, PA in 1933 to immigrant parents from Galicia, in what is today the southeastern corner of Poland. After completing undergraduate studies at Washington and Jefferson College, Washington, PA, he enrolled in Saint Vladimir's Orthodox Theological Seminary, New York, from which he received a Master of Divinity degree in 1960. He spent the next year pursuing additional studies at the Ecumenical Institute in Bossey, Switzerland, touring the Holy Land, and visiting Orthodox Christian centers throughout Europe and the Middle East.

Upon returning to the US in 1961, he took monastic vows and was ordained to the diaconate and priesthood. From 1961 through 1966 he served as rector of the Nativity of the Virgin Mary Church, Madison, IL and as an assistant military chaplain.

In 1967 he was elected and consecrated to the episcopacy as Auxiliary to the Metropolitan and Bishop of Washington DC and as administrator of the Diocese of Alaska effective June 1, 1967. On November 17, 1967 the Great Council of Bishops elected him as the diocesan Bishop of Sitka and Alaska. He was consecrated a Bishop on May 6, 1967. During his tenure in Alaska he oversaw the rebuilding of historic Archangel Michael Cathedral, Sitka, AK, which had been destroyed by fire. He also initiated regional conferences throughout the diocese and encouraged the establishment of a variety of educational programs and conferences.

In May 1970, as Bishop of Alaska, he headed the OCA's delegation which traveled to Moscow to receive the Tomos, or proclamation, of autocephaly from the Russian Orthodox Church. The Tomos guaranteed the right of self-governance for the Orthodox Church in America. Shortly thereafter, he hosted ceremonies in Alaska marking the canonization of one of the original Orthodox missionaries to Alaska, the Elder Herman. The event was significant in that it marked the first time a North American had been entered into the Orthodox calendar of saints.

In 1972 he was reassigned by the Holy Synod of Bishops of the Orthodox Church in America to the Diocese of Pittsburgh and Western Pennsylvania. During his five year tenure in his "home" region, he instituted a highly-successful program to train permanent deacons, fostered educational programs for all ages, and worked diligently to strengthen the life of the diocese on all levels.

On October 25, 1977, he was elected Metropolitan of All America and Canada during the 5th All-American Council in Montreal, Quebec. As Primate of the Orthodox Church in America, Metropolitan Theodosius assumed leadership of one of the world's 15 self-governing, or autocephalous, Orthodox churches.

In 1981 the Holy Synod of Bishops established a new diocese of Washington, DC as the seat of the Primate of the Orthodox Church in America. As Archbishop of Washington, Metropolitan Theodosius presided over this diocese, in addition to his duties as Primate.

Throughout his tenure, Metropolitan Theodosius met with numerous world religious leaders, including the primates of the various autocephalous churches. In 1990 he was the first Orthodox primate to be officially invited by the newly-enthroned Patriarch Aleksy II of Moscow, and in 1992 he was also invited to participate in the 600th Anniversary of the repose of Saint Sergius of Radonezh. In 1991 and 1993 he hosted the North American visits of Patriarch Aleksy. He hosted the Primate of the Orthodox Church of Georgia, Patriarch-Catholicos Ilia in 1998 and His Beatitude, SAWA Metropolitan of Warsaw and All Poland in 2000.

As a guest of many national and foreign religious leaders, Metropolitan Theodosius traveled to Israel, Egypt, Turkey, Greece, Georgia, Ukraine, Russia, and elsewhere. He took part in official dialogues with His All-Holiness, Ecumenical Patriarch Bartholomew I of Constantinople, at the Patriarchal headquarters in Istanbul, Turkey.

Metropolitan Theodosius played an active role in inter-Orthodox gatherings, consultations, and bodies, including the Standing Conference of the Canonical Orthodox Bishops in the Americas (SCOBA), of which the OCA is a member. He continues to be a strong supporter of various inter-Orthodox ministries, including International Orthodox Christian Charities and the Orthodox Christian Mission Center. He is also a vocal advocate for Orthodox unity in North America. Together with the members of the Holy Synod of Bishops of the Orthodox Church in America, he participated in the December 1994 SCOBA-sponsored gathering of North American hierarchs in Ligonier, PA.

Metropolitan Theodosius was a frequent guest at the White House in Washington, DC, having been called upon by Presidents Bush and Clinton for advice on religious and political affairs in various parts of the world, especially after the fall of communism in the late 1980s and early 1990s. During the most recent crisis in Kosovo, he boldly defended the rights of all peoples in the region while calling upon President Clinton to end the NATO air campaign.

During Metropolitan Theodosius' tenure, the OCA's current ministry units were established and charged with making an impact on Church life on the "grass roots" level.

On May 1, 2001, Metropolitan Theodosius, requested that he be granted a four-month medical leave of absence from his archpastoral and primatial duties by the Holy Synod of Bishops, a request they granted.

However, he continued to suffer the residual effects of strokes he had suffered in late 2000 and early 2001. Despite a four-month medical leave of absence from May 1 until September 1, 2001, which he took at the recommendation of his physicians, he found the ever-increasing burdens of his office too demanding. On April 2, 2002, Metropolitan Theodosius shared with members of the Holy Synod of Bishops his desire to retire from the office of Metropolitan of All America and Canada. The members of the Holy Synod of Bishops granted Metropolitan Theodosius' request effective July 21, 2002.

On July 21 2002, His Beatitude Metropolitan Theodosius opened the 13th All-American Council and presented his report on the last trienium. At the conclusion, he retired as Metropolitan of All America and Canada.