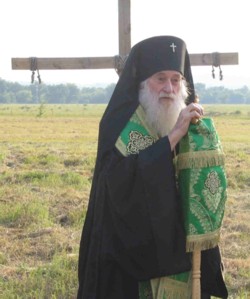 Archbishop Dmitri of Dallas and the South

His Eminence the Most Reverend Archbishop Dmitri (Royster) of Dallas and the South (1923-2011) was the ruling bishop of the OCA's Diocese of the South (1978-2009). His consecration to the episcopate is regarded by many as the first of a convert in America. He is lovingly remembered by many as "Apostle to the South."

Abp. Dmitri was born Robert Royster on November 2, 1923. As a teenager he lived in Teague, Texas (outside of Dallas), and was faithful to his conservative Baptist upbringing. But he, along with his sister, felt that there must be more to the Christian faith than his Protestant denomination was offering. After a period of inquiry and study, the two young teens were received, together, as Orthodox Christians, at Holy Trinity Greek Orthodox Church in Dallas in 1941. It was at this point that Robert adopted the name Dmitri (after St. Dmitri of Rostov). Dmitri was drafted into the US Army in March, 1943, where he served as a Japanese interpreter at the rank of Second Lieutenant. After his military service, he completed his education and served as an instructor of Spanish at Southern Methodist University in Dallas, later becoming a professor of Spanish at SMU. Dmitri also taught at Tulane University in New Orleans for a brief period. During these early years as an Orthodox Christian, Dmitri was active in missionary work among Mexican-Americans in Texas.

In 1954, he was ordained to the priesthood within the Metropolia. After his ordination, Fr. Dmitri founded St. Seraphim Church in Dallas. He continued his missionary activities among the Mexican-Americans. In 1965, he was contacted by Bishop Jose (Cortes y Olmos) of the Mexican National Church who with his flock had become interested in becoming Orthodox. Dmitri presented their situation to the Holy Synod of the Metropolia. After many visits and exchanges, Bp. Dmitri presented his report recommending acceptance of the Mexican group into the Orthodox Church. After consideration, in February 1972, the Holy Synod, now of the Orthodox Church in America, accepted the Mexican group with formation of an exarchate in Mexico, with Bp. Dmitri as exarch.

During 1966, Fr. Dmitri attended St. Vladimir's Seminary in New York while concurrently teaching Spanish at Fordham University. In 1969, Archimandrite Dmitri was elected to the episcopate. Then on June 22, he was consecrated Bishop of Berkeley as auxiliary to Abp. John (Shahovskoy) of San Francisco. The consecration of Bp. Dmitri is regarded by some historians as the first consecration of a convert to the episcopate in America (though Ignatius (Nichols) was consecrated in 1932 but subsequently left the Church). In 1970, Bp. Dmitri was assigned as Bishop of Washington, auxiliary to Metropolitan Ireney. On October 19, 1971, Bp. Dmitri was elected Bishop of Hartford and New England while continuing as the exarch of Mexico.

With the formation of the Diocese of Dallas and the South, Bp. Dmitri was elected its first ruling bishop in the 1970s and was charged with the development of the diocese, which at the time consisted of a few churches in Florida and Texas and several missions. In the 1980s, Bp. Dmitri was elevated to the rank of archbishop. Under his leadership the Diocese of the South has grown to approximately 60 parishes and missions (as of 2005), and is one of the most vibrant dioceses of the OCA.

Abp. Dmitri authored several books. His theological writings include Orthodox Christian Teaching: An Introduction to the Orthodox Faith; The Doctrine of Christ; The Parables of Christ; The Miracles of Christ; The Kingdom of God: The Sermon on the Mount; and The Epistle to the Hebrews, A Commentary, which was published in 2003. His Eminence is currently writing a commentary on the Gospel According to St. Mark. He was also the editor of The Dawn, the diocesan monthly newsletter.

On September 4, 2008, following the retirement of Metr. Herman, the Holy Synod of the OCA named Abp. Dmitri as the locum tenens, with Abp. Seraphim (Storheim) administrator to assist him. In November of 2008, Dmitri's role as locum tenens ended with the election of Bishop Jonah of Fort Worth as Metropolitan. On March 22, 2009, Abp. Dmitri requested to be granted retirement from active duty as a diocesan bishop effective March 31, 2009.

He reposed in the Lord on August 28, 2011. On March 5, 2016, the body of Abp. Dmitri was disinterred from Restland Cemetery. The state of his body surprised those who examined it, and many have said it is incorrupt, one of the marks of a saint. He was revested and reinterred in a memorial chapel adjoining St. Seraphim Cathedral, in a special burial chamber.