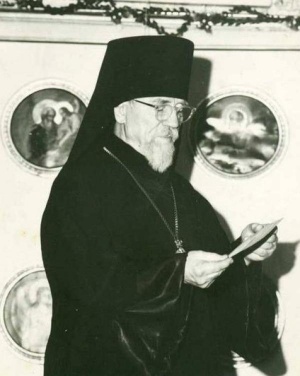 Adrian Merejko (Адриан Мережко) was born on August 25, 1889 near Kiev and grew up near the Kiev Caves Lavra. He worked as a secretary in the Ekaterinoslav provincial administration after his graduation from secondary school and before emigrating to the United States of America in 1923.

After Archbishop Vitaly (Maximenko) arrived in the United States in the 1930s, Abp. Vitaly met Adrian and became Adrian's mentor in his education in Orthodox theology. Adrian, in the meantime, had been tonsured a monk with the name Amvrossy. In 1938, Abp. Vitaly ordained Amvrossy a deacon after which he served at the Cathedral of the Ascension in the Bronx, New York under Abp. Vitaly. Later in 1938, Dn. Amvrossy was ordained a priest by Metropolitan Theophilus of the Russian Metropolia.

In 1939, Fr. Amvrossy was assigned as priest to the parish of St. Spiridon in Perth Amboy, New Jersey. On September 11, 1955, Fr. Amvrossy was consecrated Bishop of Sitka and Alaska. Then in 1967, Bp. Amvrossy was transferred to serve as Archbishop of Pittsburgh and West Virginia.

After the granting of autocephaly to the Russian Metropolia as the Orthodox Church in America by the Church of Russia in 1970, Abp. Amvrossy became disillusioned by the increased use of English instead of Church Slavonic during services and other changes in practices of the Church, Abp. Amvrossy approached Metropolitan Philaret (Voznesensky) to accept him as a member of the hierarchy of the Russian Orthodox Church Outside Russia.

Abp. Amvrossy was received into ROCOR in 1972. He served at the Synodal Cathedral in New York City, as well as at other parishes in the United States, before retiring, in 1973, to the Holy Transfiguration Monastery in Boston, Massachusetts, then under the jurisdiction of ROCOR.

Abp. Amvrossy reposed at Holy Transfiguration Monastery on December 9, 1974 and was buried at the monastic cemetery at Holy Trinity Monastery in Jordanville, New York.