Monastery of the Kiev Caves

The Kiev Pechersk Lavra (In Ukrainian: Києво-Печерська лавра; in Russian: Киево-Печерская Лавра) is a major Orthodox monastery located in Kiev, Ukraine, also referred to as the Monastery of the Kiev Caves. Founded during the times of Kievan Rus' (1051 A.D.), the monastery has remained a major center of Orthodox Christianity in the Slavic world. The monastery also serves as the residence of Metropolitan Vladimir (Sabodan) of Kiev, head of the autonomous Church of Ukraine (UOC-MP). 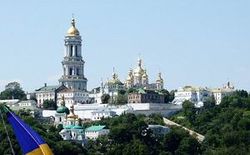 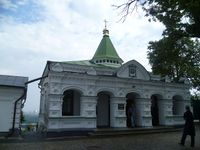 The Venerable Anthony is credited with founding the monastery when he settled in one of the caves that is now part of the Far Caves (also called the Caves of Theodosius). This occurred most probably in the year 1051 which is the traditional date for the foundation of the Kiev-Pechersk Monastery. As the community grew to twelve monks new cells were excavated. Among those who joined Anthony in the early years were Theodosius and the Venerable Barlaam. In 1057, Anthony, who desired a life of seclusion, named Barlaam as the first hegumen (abbot) and withdrew from the community to new cave in a hill that today is part of the Near Caves (also called the Caves of Anthony).

During the early times when Theodosius was abbot (1062-1074), a wooden structure was built over the Far Caves and the brethren, whose number was reaching one hundred, moved out of the caves. As the monastery grew the need for rules that would govern the life of the community was recognized. Theodosius decided to use the statute of the Studion Monastery in Constantinople as the model for the Caves monastery's rules and sent one of his monks to Constantinople to obtain a copy. Meanwhile, Metr. George arrived in Kiev accompanied by a monk from the Studion Monastery who provided a copy of the monastic statute to the monastery. The Statute of the Pechersk Monastery was then drafted on the basis of these two versions from the Studion.

The monastery was supported generously by the princes and boyars of Kiev, who donated not only money but land and buildings as well. Also, many of the educated men of the area became monks at the monastery as it became the largest religious and cultural center of Kievan Rus'. Of these monks twenty became bishops during the twelfth and thirteenth centuries. 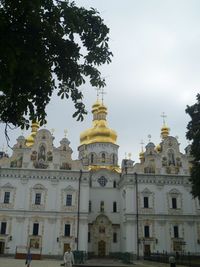 Cathedral of the Dormition of the Theotokos 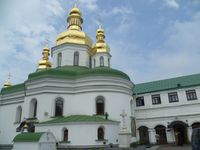 In the mid 1070s the center of the monastery began to move to the area of the present Upper Lavra with the building of the Dormition Cathedral. In time the Near and Far Caves became places of seclusion for the monks and burial places for the monastery brethren, In 1073, Anthony became the first burial in the Near Caves, followed in 1074 with the burial of Theodosius in the Far Caves.

During the ensuing years the monastery was raided several times. Significant raids included one in 1096 by the Cumans, in 1169 by Andrei Bogoliubsky of Vladimir-Suzdal, and in 1203 by Prince Riuik Rostislavich. In 1240, the invading hordes of the Tatars, led by Baty-Khan, came through Kiev, destroying the city and the monastery. During the times of Tatar occupation the monks moved into the caves, to remain there for a long time. After each raid the churches and buildings would be replaced and the system of underground caves and catacombs would be expanded. In 1470 the monastery was rebuilt again by Prince Semen Olelkovich, but was once again destroyed by Tatars in 1482.

From these times until the end of the sixteenth century little documentation remains as historical source material as records were destroyed during each raid. Beginning in the sixteenth century, reports by travelers provide descriptions of the caves and the monastic life then practiced at the monastery. These reports noted the length of the underground caves, whose entries resemble entrances to mines, and which also noted that liturgy was celebrated in the two underground churches every Saturday. By the late sixteenth century the monastery had once again recovered. At this time it was granted stavropegial status by the Patriarch of Constantinople. This freed the monastery from the control of the metropolitan of Kiev. The monastery was also granted the status of a lavra.

Following the Union of Brest-Litovsk in 1596, those who supported the union and became Greek Catholics made an effort to gain control of the lavra, but the Orthodox prevailed and retained control. The Kievan Cave Monastery Press, the first printing press in Kiev, was established at the monastery in 1615 by Archimandrite Yelisei Pletenentsky. The monastery was further restored and improved by Archimandrite Peter Mogila, later metropolitan, who in 1631 opened the Kiev-Pechersk Monastery school with a "western" curriculum. This school was, in 1632, combined with the Kiev Epiphany Brotherhood School into a college that later became the Kiev Mogila Academy. In 1688, the Lavra was subordinated directly under the Moscow patriarchate, but still with its stavropegial status.

A major fire in 1718 severely damaged the monastery. The main church and the printing house, with the library and archives, was destroyed. Restoration of this damage took ten years. In 1720, Peter I’s government prohibited printing of new books and imposed synodal censorship on all publications from the monastery. This severely limited the monastery’s cultural influence.

By this time, the lavra was large and had acquired much wealth. The heart of the monastery remained the two underground labyrinths of tunnels, cells, and catacombs, from which the name of the monastery is derived and in which monks lived and were buried. But, the extent of the lavra grew beyond that. It owned three cities, seven towns, some 200 villages and hamlets, and about 70.000 serfs. It also owned eleven brickyards, six foundries, over 150 distilleries, over 150 flour mills, and about 200 taverns. This ended in 1786 when the Russian government secularized the property and made the lavra dependent upon the state. 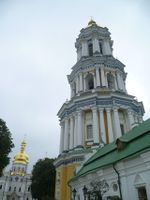 The great bell tower of the Upper Lavra

In the early twentieth century, before the Bolsheviks' assumption of power, Dormition Kiev-Pechersk Lavra was the residence of over one thousand monks. It was one of the most famous centers of religious life in the Orthodox world, visited each year by hundreds of thousands of pilgrims. The monastery was renowned for the relics of many saintly monks who had been glorified in 1643 under Metr. Peter Mogila. This changed after the Soviets assumed control of the government in late 1917.

Changes by the Soviet authorities began in 1921. Initially, the authorities confiscated the relics and historical and artistic objects that belonged to the monastery. Buildings were converted to commercial and other uses. Many of the monastery's monuments were combined into a museum, the Lavra Museum of Religious Cults and Way of Life, that also contained collections from other museums in Kiev. After closing down the monastery completely in 1926, the Soviet government first turned the grounds into a museum preserve, the All-Ukrainian Museum Quarter, that consisted of a number of museums which emphasized anti-religious propaganda, and included archives, libraries, and workshops before closing the Quarter in 1934 and transferring the collections to new museums in Kiev. All the bells were removed by the Soviet authorities during the period 1931 to 1932. 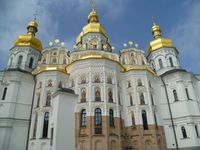 Only fragments of the Dormition Cathedral survived. Some were embedded in the walls of the reconstructed church.

During World War II (the Great Patriotic War) the Soviet army mined the Holy Dormition Cathedral before the advancing Nazi forces. The explosives were, then, detonated after the Nazi forces had occupied Kiev on November 3, 1941 severely damaging the cathedral. After the war the lavra grounds were restored and renamed the Kievan Cave Historical-Cultural Preserve, which housed a number of museums and institutions. Also, a functioning monastery of about one hundred monks was allowed to operate until 1961.

As the atheistic times began to wane in the 1980s, the Soviet government transferred in 1988 the area of the Lower Lavra, with the Far Caves, to the possession of the Ukrainian Exarchate of the Church of Russia in commemoration of the one thousandth anniversary of the Baptism of Rus'. With the return of the Lavra to the Church the monastic and spiritual life was slowly restored. During 1998 to 2000 the city of Kiev rebuilt the Holy Dormition Cathedral and returned it to the Church. As new monks have joined elderly monks who have returned to the Lavra, the cycle of services has been re-established, building on the primary duty of the monk of never ceasing prayer.

Churches of the Lavra

The Dormition of the Most-Holy Theotokos Cathedral is the Lavra's principal place of worship. Other churches are as follows: 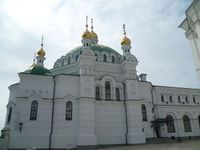 Trapeza Church (of Sts. Anthony and Theodosius of Pecherska) 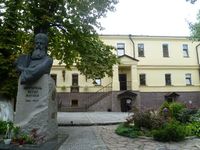 His Beatitude Vladimir, Metropolitan of Kiev and All Ukraine, was the Archimandrite and Abbot of the Lavra since 1992 when he became the Primate of the Ukrainian Orthodox Church until his death in 2014. His Eminence Pavel, Archbishop of Vyshgorod and Vicar of Kiev Metropolia, has been the Superior of the Lavra since 1994.

The Lavra is also the site of the Kiev Theological Academy and Seminary which revived its activities in 1989.