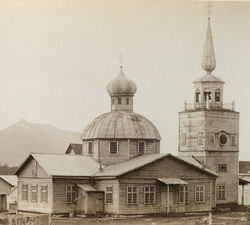 The Cathedral of St. Michael the Archangel, located in Sitka, Alaska is the cathedral of the ruling bishop of the Diocese of Alaska, a diocese of the Orthodox Church in America. The present day building is a reconstruction of the original building that was built during the early years of the 1840s and burned in 1966.

On December 15, 1840, Archimandrite Innocent (Veniaminov) was consecrated Bishop of Kamchatka and Kuril Islands in Russia and the Aleutian Islands in Russian America, a newly created diocese, with his see located in Novoarkhangelsk (New Archangel), today Sitka, Alaska, to which he arrived in September 1841.

As part of the organization of his diocese Bp. Innocent began the design and construction of his cathedral that was dedicated to St. Michael the Archangel. Construction took place between 1844 and 1848. In addition to designing the cathedral, Bp. Innocent built the clock in the original edifice. Using skilled Finnish carpenters, the cathedral was constructed of spruce logs and used sailcloth to line the walls and ceilings for insulation and acoustics.

The cathedral is constructed in the form of a Greek cross with a belltower. While it was of wooden construction, the structure bears a touch of the style of the Italian architect Count Bartholomew Rastrelli, who had designed many buildings in St. Petersburg, Russia, with its large central dome. In addition to the main altar, there are two side chapels, the one on the north side dedicated to Icon of Our Lady of Kazan and the one of the south side to the Ss. John the Baptist and Prince Alexander Nevsky.

St. Michael's Cathedral served as the diocesan see until it was moved in 1872 to San Francisco. In 1904, the cathedral again became the see of the Bishop of Alaska, auxiliary to Archbishop Tikhon of the Diocese of Aleutian Islands and North America. In 1970, under the Tomos of Autocephaly of the Russian Orthodox Church, St. Michael's Cathedral became the cathedral of the bishop of the Diocese of Alaska under the jurisdiction of the Metropolitan of the Orthodox Church in America.

However, in January 1966, a fire ravaged the cathedral. Through the efforts of the inhabitants of Sitka, most the interior furnishing were saved as lines of people quickly moved the furnishings out of the burning building. The cathedral structure was rebuilt, using drawings of the cathedral that were made by the Historic American Buildings Survey in 1961, The reconstruction created a reproduction of the original structure that incorporated modern fire-resistant materials. Today, the cathedral is constructed of concrete and steel walls with vinyl siding that recreates the original wooden texture. The roof is formed with asphalt shingles with the use copper roofing on the domes.

Many of the furnishings saved from the original cathedral have been used in the new structure. In the new cathedral, while the north chapel remains dedicated to the Icon of Our Lady of Kazan the chapel on the south side of the church has been in 1978 dedicated to the builder of the cathedral, Bishop Innocent, who in 1977 had been glorified a saint by the Orthodox Church.

St. Michael's Cathedral was designated as a National Historic Landmark in 1962 by the United States National Park Service and was listed on the National Register of Historic Places by the same agency in October 1966.