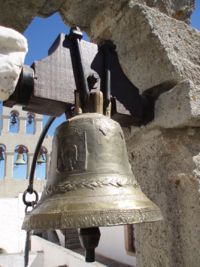 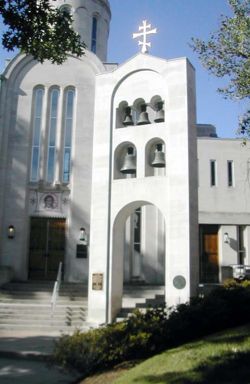 Bells are a distinctive part of Orthodox Christian divine services. Bells are used for a number of purposes throughout the liturgical cycle, such as a summons for the faithful to divine services and as an announcement to those not present in church of specific moments in the services.

In the early centuries of Christianity, the Church was often persecuted and did not have the opportunity to openly call the faithful to services. The faithful were notified of times of services by personal contact or by the presiding clergy at the end of the services. After the persecutions ceased, various means of announcing services arose, but the pealing of bells appeared to become the preferred method. While bells are known from antiquity, the first use of bells in a Christian context was in western Europe. Tradition, although probably inaccurate, ascribes the invention of bells in the late fourth century to St. Paulinus, the bishop of Nola in Campania, Italy. However, there is no record in Europe of the use of bells religiously until the early seventh century. Bells came into use in the eastern Greek Church in 865 when the Doge of Venice gave twelve large bells to Emperor Michael. These bells were hung in a tower near Hagia Sophia Cathedral.

Bells were introduced in Russia almost simultaneously with the Baptism of the Rus in 988, coming to the eastern Slavs through western Europe. These bells were generally small and used in small sets of only two or three bells. By the fourteenth century, however, bell foundries had come into existence that produced very large bells. Large bells in Russia weighed up to 144,000 pounds. The largest bell then cast is the Tsar Bell which stands at the base of the bell tower of Ivan III Vasilevich (Ivan the Great) in the Moscow Kremlin. This bell weighs 288,000 pounds, but was never used, because it cracked in a fire when the scaffolding used to hang the bell burned.

Operation of bells in eastern Europe differed from that in the West. In the East the dapper strikes against a stationary bell. In the West the whole bell is swung while the clapper is stationary. 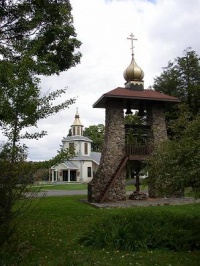 In settings not pertaining to church services, bells are used to signal special occasions and announce assembly of faithful and citizens. In monastic settings bells may be used each day to awaken the monks and signal the daily routine of monasteries. Also, ringing of bells had been used often to alert inhabitants of towns and cities of approaching armies and attackers. A storied example of such a use is the large bell at St Sophia Cathedral in Novgorod, Russia, that was used to warn of the approach of Ivan the Terrible's army to the city. Angry at its use, the tyrant had the bell punished by having one of the ears, used to hang the bell, cut off so that it could no longer be hung and rung.