Bartholomew I (Archontonis) of Constantinople 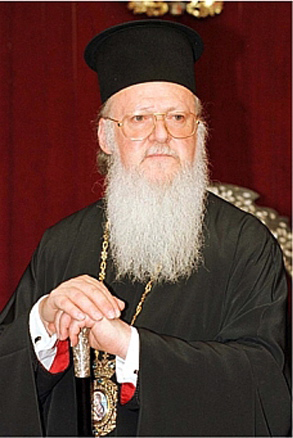 His All-Holiness Ecumenical Patriarch Bartholomew I 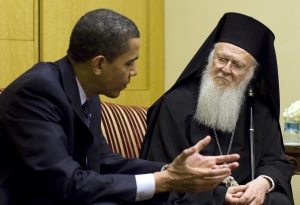 Dimitrios Archontonis was born on February 29, 1940 in the village of Aghios Theodoros (Άγιος Θεόδωρος in Greek, Zeytinli Köyü in Turkish) on Imvros (now Gökçeada), an island in the Aegean Sea belonging to Turkey. He was the son Christos and Merope Archontóni. He is Turkish by citizenship, but belongs ethnically to the remnants of the Greek community that formally existed in Turkey, before the exchange of Turks who were in Greece with Greeks who were in Turkey under the provision of the Treaty of Lausanne that ended the Greco-Turkish War of 1919-1922.

Dimitrios (Christou) Archontonis began his education in the village of Aghios Theodoros and continued at the Zographeion Lyceum in Istanbul. After graduation form the Lyceum, he entered the Patriarchal Theological School of Halki, from which he graduated in 1961 with highest honors. From 1961 to 1963, Dimitrios served his military obligation with the Turkish army as a reserve officer. After his release from the army in 1963, Dimitrios continued his postgraduate education at the Pontifical Oriental Institute in Rome, Italy, the Ecumenical Institute of Bossey in Switzerland, and the Ludwig Maximilians University in Munich, Germany. He received his doctorate after completing his doctoral research in Canon Law at the Pontifical Gregorian University in Rome where he became a lecturer. In 1968, Dimitrios took a position as assistant dean at the Theological School of Halki.

On August 13, 1961, Dimitrios was ordained a deacon as well as was given a monastic tonsure with the name Bartholomew. On October 19, 1969, Dn. Bartholomew was ordained a priest. In 1970, he was elevated to the rank of archimandrite. On December 25, 1973, Fr, Bartholomew was consecrated Metropolitan of Philadelphia in Asia Minor. In 1974, he became a member of the Holy Synod of the Church of Constantinople. On January 14, 1990, he was enthroned Metropolitan of Chalcedon. On October 22, 1991, Metr. Bartholomew was elected the 270th Archbishop of Constantinople, New Rome, and Ecumenical Patriarch.

As Patriarch, he has been particularly active internationally. One of his first focuses has been on rebuilding the once-persecuted Orthodox Churches of Eastern Europe following the fall of Soviet Communism in 1989-91. As part of this effort he has worked to strengthen ties amongst the various national Churches and Patriarchates of the Orthodox Church. He has also continued the reconciliation dialogues with the Roman Catholic Church started by his predecessors, and initiated dialogues with other faiths, including Christian, Muslim, and Jewish sects. He is sometimes accused of acting in an authoritarian, almost papal manner by some of his detractors, especially regarding his actions toward the Greek Orthodox Archdiocese of America.

Perhaps most unusually, he has gained a reputation as a prominent environmentalist, putting the support of the Patriarchate behind various international environmental causes.

The official title of the Ecumenical Patriarch is:

His All Holiness, Bartholomew I, Archbishop of Constantinople New Rome and Ecumenical Patriarch;

The official title recognized by the Republic of Turkey is:

Bartholomew I, Patriarch of the Fener Greek Orthodox Patriarchate in Istanbul