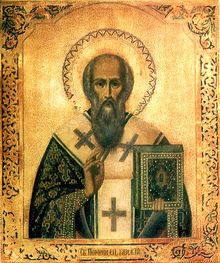 Our father among the saints Porphyrios of Gaza ((Greek)

Πορφύριος ; (Latin)
Porphyrius ; (Old Church Slavonic)
Порфирий, Porfiriy ) was the Bishop of Gaza from 395 to 420 AD, known from the account in his Life for Christianizing the recalcitrant pagan city of Gaza, and having its temples demolished. His feast day is celebrated on February 26 / March 11 (March 10).[1]

Saint Porphyrios of Gaza is known to us from the Vita Porphyrii, the vivid biography by Mark the Deacon,[note 1] which is a contemporary account that chronicles in some detail the end of paganism in Gaza in the early fifth century.[note 2]

Having the inclination for monastic life, he left his native region at twenty-five years of age, and set off for Egypt where he lived in the Nitrian desert (Scetes), a great monastic center at that time, and went under the guidance of St Macarius the Great. Under the guidance of this experienced spiritual father, the young Porphyrius was tonsured a monk, and remained there for five years. Here, he also met St Jerome, who was then visiting the Egyptian monasteries.

Ascetic in the Jordan

He then went on pilgrimage to Jerusalem, preaching the Gospel of Christ to the Jews and the Greeks.[1][note 3]

In the proximity of Jerusalem, he lived an ascetical life in a cave in the Jordanian wilderness for five more years. There he became seriously ill from liver cirrhosis,[1] but in spite of his impaired health, he frequently visited the Church of the Resurrection and the other sacred shrines. Here he met the Asiatic Mark, who later became a deacon of his church and his biographer.[1]

Mark proved a loyal companion and agreed to look after an unresolved matter for Porphyrios in his native city Thessaloniki, regarding the sale of the estate that was still owned by him. When Mark returned he brought with him 4,400 coins from the sale of the assets, as well as many silver vessels and precious garments, all of which were distributed to the poor and donated for the adornment of the monasteries of Jerusalem and Egypt.[1]

During Mark's absence in Thessaloniki, Saint Porphyrius health was miraculously restored, after he received a vision of the Crucifixion of the Lord and of the Good Thief.[1]

In 392 AD, when Porphyrius was 45 years old, he was ordained to the priesthood by Patriarch John II of Jerusalem (386-417), and was appointed as the custodian of the Venerable Wood of the Cross of the Lord.

In 395 AD the bishop of the city of Gaza (in Palestine) died. The local Christians went to Caesarea to ask Metropolitan John of Caesarea Palaestina to send them a new bishop who would be able to contend against the pagans, which were predominant in their city and were harassing the Christians there. The Lord inspired the Metropolitan to summon the priest Porphyrios. With fear and trembling the ascetic accepted the office of bishop, and with tears he prostrated himself before the Life-Creating Wood and went to fulfill his new obedience.

Persecution of Christians in Gaza

The Christian community then scarcely numbered 280 individuals in Gaza, according to the Vita of St. Porphyry, and the community-at-large, who were very fanatical idolaters, resisted the closing of temples and destruction of pagan images which had already started in more Christianized regions.[note 4]

Only by his great faith and patience did Porphyrios succeed in converting the inhabitants of Gaza to the Faith of Christ. By performing many miracles there, he guided many idolaters and heretics to the true knowledge of God. At one time, there had been a long spell without rain, causing a severe drought. The pagan priests brought offerings to their idols, but the woes did not cease. St Porphyrius imposed a fast for all the Christians, and he then served an All-Night Vigil, followed by a church procession around the city. Immediately the sky covered over with storm clouds, thunder boomed, and abundant rains poured down. Seeing this miracle, many pagans cried out, “Christ is indeed the only true God!” As a result of this, 127 men, thirty-five women and fourteen children were united to the Church through Holy Baptism, and another 110 men soon after this.

Overall however, the pagans continued to harass the Christians, passing them over for public office, and burdening them with taxes.

Therefore in order to protect his flock from the injustices of the pagans and archons of Gaza, he twice appealed to the court to close and destroy the heathen temples of Gaza.

In 398 AD Bishop Porphyrios sent his deacon and chronicler Mark to Constantinople, to obtain aid. An official named Hilarius duly arrived with soldiers to close the temples, but the Marneion (a great cult center of paganism, founded by Emperor Hadrian in 129 AD)[note 5] remained open, because Hilarius was bribed with a large sum of money (Vita 27). There was no great change, however, in the attitude of the people, who refused to allow Christians "to hold any civil office, but entreated them as naughty slaves" (Vita 32).

Then during the winter of 401-402 Bishop Porphyrios personally traveled to Constantinople, accompanied by Bishop John of Caesarea Palaestina, to see Emperor Arcadius and Patriarch John Chrysostom to seek their support in this unequal struggle with the idolaters.

Saints John and Porphyrius were presented to the Empress Eudoxia who was expecting a child at that time. “Intercede for us,” said the Bishops to the Empress, “and the Lord will send you a son, who shall reign during your lifetime”. Eudoxia very much wanted a son, since she had given birth only to daughters. Through the prayer of the saints an heir was born to the imperial family (Theodosius II).

As a result of this, the Emperor issued an edict in 401 that restricted the activities of the Pagans and the other heretics, restored privileges to Christians, and provided for a royal grant whereby churches were erected on sites which had previously been pagan temples.

Cynegius, a special imperial envoy, executed the decree in May, 402. Eight temples — those of Aphrodite, Hecate, the Sun, Apollo, Kore (Persephone), Tyche (Tychaion), the shrine of a hero (Heroeion), and even the great Marneion,[note 5] — were either pulled down or burnt. Simultaneously soldiers, who were billeted in the vacated houses visited every house, seizing and burning the idols and private libraries as "books of magic".

The Marneion, the temple sacred to Zeus Marnas, who was the local Hellenistic incarnation of Dagon, the patron of agriculture, a god who had been worshipped in the Levant since the third millennium BC, was set afire with pitch, sulfur and fat; it continued to burn for many days; stones of the Marneion were triumphantly reused for paving the streets.

Directly upon the ruins of the Marneion was erected, at the expense of Empress Eudoxia, a large beautiful church with thirty-two large marble columns, called the Eudoxiana in her honor, which was dedicated on April 14 (Pascha), 407 AD.[1][note 6] Thus paganism officially ceased to exist in Gaza.

In subsequent years Saint Porphyrius worked for the establishment of his diocese, and his biographer Mark records in vibrant tones his charitable and missionary activity.

In 415 AD Saint Porphyrius took part in the Council of Diospolis (Lydda, Lod), which was chaired by Patriarch John II of Jerusalem. This synod dealt with Pelagius, who had fled to Jerusalem after the conflict he had in Africa with Blessed Augustine, Bishop of Hippo, on the themes of Original Sin and Divine Grace. At this synod Pelagius condemned the theses that were attributed to him, and was restored to communion.

Saint Porphyrius continued to uphold the Christian Faith in Gaza to the very end of his life and guarded his flock from the vexatious pagans, but only after his many efforts, sufferings and prayerful tears to God. Through the prayers of the saint numerous miracles and healings occurred. The holy arch-shepherd guided his flock for twenty-five years, and reposed peacefully in 420 AD at an advanced age, having fought the good fight against the idolaters until the day of his repose. He was a miracle-worker both during his life and after his death. Even today, his relics repose in Gaza.

After the Muslim conquest in the 7th century, the Church of St. Porphyrios (Eudoxiana) in Gaza City, founded as a Byzantine Church in 407 AD, was transformed into the Great Mosque of Gaza.

The existing structure of the Church of Saint Porphyrius today dates from the twelfth century. It is located in the Zaytun Quarter of the Old City, and is the oldest active church in the city. The tomb of St. Porphyrios is situated in the northeastern corner of the church.[2]

On March 11th, 2013 (N.S.), the feast of St. Porphyrios, the Orthodox community in Gaza City with Archbishop Alexios (Moschonas) of Tiberias celebrated the 1,606th anniversary of the founding of the Church of St. Porphyrios.[3] Saint Porphyrius is also Gaza’s patron saint.

Apolytikion - Tone 4[4]
The truth of things hath revealed thee to thy flock as a rule of faith,
an icon of meekness, and a teacher of temperance;
for this cause, thou hast achieved the heights by humility, riches by poverty.
O Father and Hierarch Porphyrius, intercede with Christ God that our souls be saved.

Kontakion — Tone 2[4]
Arrayed with a most sacred life,
thou wast adorned with the priestly vestment,
O all-blessed and godly-minded Porphyrius;
and thou art conspicuous for miracles of healing,
interceding unceasingly for us all.

(A now out-of-copyright translation of this fascinating Life.)