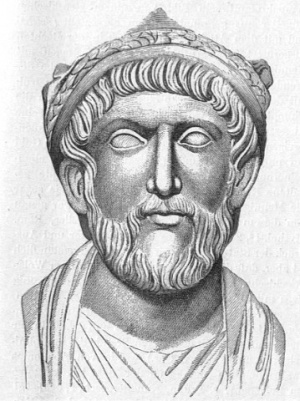 Julian the Apostate, pagan Emperor of Rome.
Julian the Apostate was the Roman emperor from 361 to 363. During his reign he attempted to revert the Roman empire from Christianity back to paganism, thus the appellation Apostate. Through his edict of tolerance of 362 he reopened pagan temples, provided for restitution of alienated temple properties, and called for the return of bishops who had been exiled. His reign was cut short by his death during the Battle of Ctesiphon in Persia in June of 363.

Born Flavius Claudius Julianus in either 331 or 332 A.D. to Julius Constantinus and his second wife Basilina, Julian was the nephew of St. Constantine the Great (Constantine I) through his father, who was himself a half-brother of Constantine I. Julian was raised within the imperial household and thus witnessed its intrigues; such intrigues eventually resulted in the murder by his uncle Constantius II of several members of his family, including his half-brother Constantius Gallus. In 355, Julian was made Caesar of the West. In the following years he led the defense of the Roman Empire along the Rhine River against the intruding Germanic tribes. His successes included recovering Colonia Agrippina (Cologne) and securing the frontier on the Rhine for the next 50 years. With the death of Constantius II on November 3, 361, Julian became emperor, being recognized in Constantius' will as his rightful successor.

Julian, who had become skeptical of Christianity due to the intrigues and murders under Constantius, restablished the persecution of Christians upon his ascent to the imperial throne. One of these was a 362 edict of tolerance that suppressed the on-going persecution of pagans and destruction of their temples. His actions sought to undermine Christian efforts to resist reestablishment of paganism in the empire. His edict for schools prohibited Christian teachers from using the pagan sources that formed the core of Roman education. Thus, he was attempting to alienate Christian students from Roman society by depriving them of the knowledge needed for worldly success. By recalling exiled bishops, Julian encouraged dissension among the Christians, who were already fighting the heresy of Arius.

Though he encouraged the restoration of pagan temples, Julian appeared not to practice the civic paganism of the pre-Constantine empire, but rather associated himself with a magical approach to the classical philosophies called theurgy or neoplatonism. In any event, his practices were not Christian. He believed himself to be Alexander the Great in another body through the transmigration of souls, as taught by Plato and Pythagoras. He wrote a number of controversial works, some of which have survived, including philosophical treatises, hymns, and of course satires or critiques of Christianity and Constantine the Great. His efforts to bring back paganism were doomed from the start, however, as most of the Empire by then was rather indifferent to it.

In 362, Julian began a campaign against the Persians in the east. There, on June 26, 363, Julian received a fatal wound during the Battle of Ctesiphon, a victorious but inconclusive battle. He had not worn any armor, either through confidence of a victory or through haste or forgetfulness. With his death the last formal opposition to Christianity ended, and, in February 380, Theodosius I (Theodosius the Great) published the edict that all his subjects should profess Christianity.