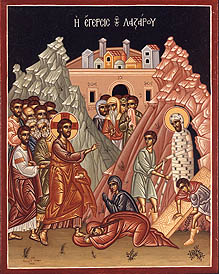 The righteous saint Lazarus, also Lazarus the Four Days Dead,[note 1] or Lazarus of Bethany (latinized from the Hebrew: אלעזר, Elʿāzār, Eleazar - "God is my help"[1]) was a friend and one of the first disciples of Jesus Christ, and the first Bishop of Kition in Cyprus.[note 2] He was resuscitated by Jesus Christ shortly before His triumphal entry into the city of Jerusalem.[2][3][4][5][note 3][note 4]

The Church commemorates his feast on Lazarus Saturday,[6] which together with Palm Sunday, hold a unique position in the church year as days of joy and triumph between the penitence of Great Lent and the mourning of Holy Week.[7]

Lazarus is also commemorated on the fixed feast day of March 17,[8][note 5] while the translation of his relics from Cyprus to Constantinople in the year 898 AD[9] is commemorated on October 17.[10][11][note 6]

According to the Gospel of John, Lazarus lived in the town of Bethany (approximately two miles outside of Jerusalem in the present day West Bank) with his two sisters, Mary and Martha. On His way to Jerusalem before the Passover, the sisters had sent word to Jesus and His Apostles that Lazarus was ill. The Lord tarried where He was, later perceiving Lazarus' death. When He arrived, Lazarus had already been in his tomb for four days. When Martha reproached Our Lord for not arriving sooner, Christ assured her that Lazarus would rise. Martha mistook this for the universal resurrection on Judgment Day, to which He replied, "I am the resurrection and the life: he that believeth in me, though he were dead, yet shall he live. And whosoever believeth in me shall never die" (John 11:25-26, KJV).

In the presence of the mourners, the Lord ordered the stone rolled away from Lazarus' tomb and bade him to come forth. Lazarus did so, still in his grave wrappings. Jesus then called for the crowd to remove the wrappings and free him. St. John goes on to explain that even more Jews were convinced of Jesus' divinity. This event struck fear into the hearts of the Jewish leaders, so much so that they even considered putting Lazarus to death (John 12:9-11). The religious hierarchy of the Jews at this time was dominated by Sadducees, who denied the resurrection. The Raising of Lazarus represents a testimony to the resurrection - both Christ's and the universal resurrection, as well as Our Lord as victor over death.

According to the V. Rev. Fr. Thomas Hopko, the Lazarene Miracle is the "climactic high point" of St. John's Gospel and the proof of Christ's divinity. It is also the act which serves as the catalyst of the events leading to Our Lord's arrest and Passion.[12]

According to Scripture and the tradition of the Cypriot church, Lazarus was compelled to seek refuge away from Jerusalem to avoid the anger of the high priests and the pharisees, who wanted to kill him, ...the chief priests consulted that they might put Lazarus also to death; because that by reason of him many of the Jews went away, and believed in Jesus (John 12:10-11). Many Christians too ... were scattered abroad upon the persecution that arose about. Stephen travelled as far as Phoenicia, and Cyprus, and Antioch ...; just like Stephen, Lazarus would have had to leave Judea to seek refuge in another country. This location was Kition in Cyprus.

When Apostle Paul and Apostle Barnabas travelled to Cyprus, they ordained Lazarus as the first Bishop of Kition. This is why all episcopal thrones in Larnaca have the icon of St. Lazarus instead of Christ, which is the standard custom of the church.

Another famous tradition related to Lazarus is the discovery of Mount Athos in 52 AD by the Theotokos. Lazarus was very close to the Virgin Mary and he was very grieved that he could not return to Jerusalem to visit her (he was still in fear of the Jews). The Theotokos learned of his sorrow and sent him a letter to comfort him. She asked that he might send a ship to her that she might visit him in Cyprus. With great joy, Lazarus sent a ship to the Holy Land to bring the Virgin Mary and John, the beloved disciple to Cyprus for a visit. However on their journey, a great storm blew them off course and carried them to the shores of Ephesus and then the ship to the shores of Athos, Greece. Unaware that divine providence had brought her to this area, the Virgin Mary completely taken by the beauty of the area, prayed to her son that this could be her garden devoted to prayer to "fight the good fight of faith". Having converted, blessed and established a new Christian community from the local idolaters they set sail for Cyprus and met with Lazarus. 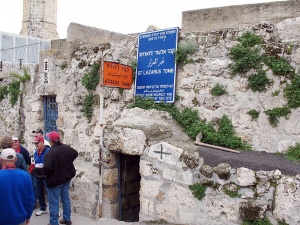 Tomb of Saint Lazarus in Bethany.

Further establishing the apostolic nature of Lazarus' appointment, was the tradition that the bishop's omophorion and epimanikia were presented to Lazarus by the Virgin Mary, who had woven it herself.[note 7]

Little more is known about Lazarus after Our Lord's Resurrection and Ascension, except that during his thirty years after his resuscitation, he never smiled or joked except on one occasion, recorded in the Synaxarion. One day, he saw someone stealing a clay pot and he smiled saying, "the clay steals the clay".[6][13]

The first tomb of Lazarus in Bethany remains as a site for pilgrims to this very day.

The second tomb on the island of Cyprus, was found in Kition sometime in 890 AD, with his relics inside, and bearing the inscription: "Lazarus, the Friend of Christ."

Church of Saint Lazarus in Larnaca and Relics 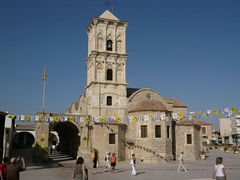 After St. Lazarus' tomb was found in Larnaca in 890 AD, Emperor Leo VI of Byzantium had Lazarus' remains transferred to Constantinople in 898. The transfer was apostrophized by Arethas, Bishop of Caesarea (Caesarea Palestinae), and is commemorated by the Orthodox Church each year on October 17.

In recompense to Larnaca, Emperor Leo had the Church of St. Lazarus erected over Lazarus' tomb, which still exists today. The marble sarcophagus can be seen inside the church under the Holy of Holies. 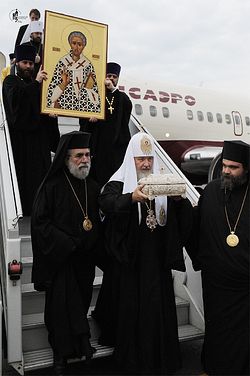 After the sacking of Constantinople by the Franks during the Fourth Crusade in 1204, the Crusaders carried the saint's relics to Marseilles, France as part of the booty of war. From there, "later on, they disappeared and up to the present day they have not been traced."[13]

In the 16th century, a Russian monk from the Monastery of Pskov visited St. Lazarus’s tomb in Larnaca and took with him a small piece of the relics. Perhaps that piece led to the erection of the St. Lazarus chapel at the Pskov Monastery (Spaso-Eleazar Monastery, Pskov),[note 8] where it is kept today.[14]

On November 23, 1972, human remains in a marble sarcophagus were discovered under the altar, during renovation works in the church of Church of St. Lazarus at Larnaka, and were identified as part of the saint's relics.[15][note 9]

In June 2012 the Church of Cyprus gave a part of the holy relics of St. Lazarus to a delegation of the Russian Orthodox Church, led by Patriarch Kirill of Moscow and All Russia, after a four-day visit to Cyprus. The relics were translated to Moscow on June 11, 2012, and were given to Archbishop Arseniy of Istra, who took them to the Zachatievsky monastery (Conception Convent), where they were put up for veneration.[16]

Though not as widespread as they used to be, "Lazarine Carols" are still sung in certain parts of Greece as a cherished tradition. On the day before Lazarus Saturday, children would go out into the fields to gather flowers to decorate their baskets and go out singing carols. In some cases they will also have prepared special outfits. In return for singing the Lazarine Carols, the children would receive gifts in the form of eggs, money or other foods.[17][note 10]