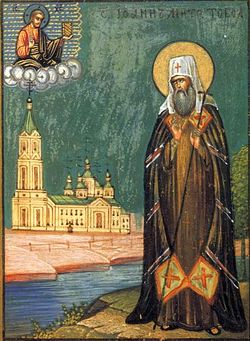 Our father among the saints John Maximovitch of Tobolsk, Metropolitan of Tobolsk and All Siberia, was a pioneer in the development of higher theological education and publication in Russia. He was unpretentious and, as a missionary to the pagans of Siberia, endeared himself to his flock, preaching the word of God. He is remembered on June 10.

Saint John was born John Maximovitch in 1651 in the city of Nezhin. He was the eldest of seven sons born to his father and mother, Maksim Vasilevich and Evphorosynia Maxsimovitch. He attended the Kiev-Mohyla Collegium. After graduating with honors from the academy, he remained there as a teacher of Latin. In 1680, he entered the Kiev Caves Lavra where he was tonsured a monk with the name John. Displaying a distinct ability in speaking, the brotherhood entrusted the young John with the obedience of preaching, as he revealed an exceptional talent of eloquence and graceful abilities in which he attached an especial significance to inward religious self-knowledge.

In 1685, the monastery sent him on a mission to Moscow that resulted in his appointment by Patriarch Joachim as vicar of the Bryansk Svensk Monastery, a monastery that was then subordinate to the Kiev Pechersk Lavra. In 1695, Theodosius, Archbishop of Chernigov, elevated Hieromonk John to archimandrite and abbot of the Chernigov Eletsk Monastery and as his successor for the cathedra seat of Chernigov. After the repose of Abp. Theodosius, Arch. John was consecrated Bishop of Chernigov on January 19, 1697 by Patr. Hadrian and the council of bishops in Uspensky Cathedral in the Kremlin of Moscow.

Upon assuming the cathedra of Chernigov, Bp. John organized, near his cathedral, a “Collegium” modeled after that of the Kiev academy. This school Bp. John intended to serve as an “Athens at Chernigov”, a school of pious enlightenment. The school became famous because of its high level of theological education, becoming the first seminary in Russia and the model for theological seminaries that opened in other dioceses of the Church of Russia. In time he also established a printing press to publish theological works.

On August 14, 1711, Bp. John was raised to the dignity of metropolitan and appointed to the cathedra of Tobolsk and All Siberia. At Tobolsk, Metr. John continued the policies he had instituted at Chernigov, that is, the enlightenment of his diocese and the improvement of the theological school that had been started by his predecessor and missionary, Metr. Philothei (Leschinsky). Metr. John also continued his apostolic preaching among the pagans of Siberia. In 1714, Metr. John sent Archimandrite Ilarion (Lezhaisky) to Beijing, China. Archimandrite Ilarion led the first Spiritual Mission of the Russian Orthodox Church in China.

Metr. John reposed on June 10, 1715, after he had served Divine Liturgy and hosted in his quarters, as was his practice, a meal for the clergy and the local poor. Having withdrawn to his chamber after the meal, he died while in prayer and on his knees, at the sounding of the bells for Vespers. He was buried in the chapel of St, John Chrysostom at the Uspenie-Sophia Cathedral in Tobolsk and presently rests in the Cathedral of the Pokrov-Protection of the Mother of God in Tobolsk. 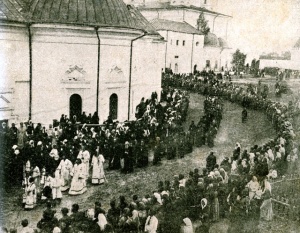 Religious procession with relics of St John of Tobolsk, 1916.

Metr. John was noted as a quiet man who was unpretentious, considerate, sympathetic to the poor, and merciful. He went out of his way to help people, often secretly. He would at times bring alms to needy homes dressed as a simple monk saying simply “Accept this in the Name of Jesus Christ.” He always opened his home to those in need of help or of a word of comfort.

Metr. John maintained a close relationship with Mount Athos, particularly with Panteleimon Monastery. His concern for the monks was filled with warm interest, and he provide substantial material aid during their difficult years. His grammota to Panteleimon Monastery has been preserved and is a testament of his concern for the monastics living on Mount Athos.

The theme he developed for his life and which he used in his preaching, and later missionary service, can be defined as “How ought man to conform his will with the will of God?” His answer to this question appeared in the work ’‘Iliopion’‘ (the Heliotropion or Sunflower) ’‘or Conforming of the Human Will with the Divine Will’‘.

St. John (Maximovitch) of Tobolsk was glorified in 1916.

Metr. John was a prolific writer. Educated at the Kiev-Mohyla Collegium, his language for writing was Latin that he later translated into Russian. In addition to the ’‘Iliopion’‘, his works include: