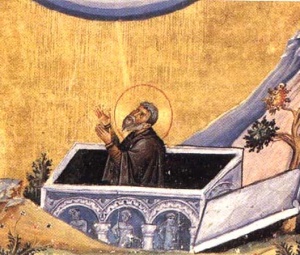 Our Righteous Father Jacob of Nisibis, also James of Nisibis , Jacob the Great , Jacob of Mygdonia ,[note 1] or Mor Ya`qub , called the "Moses of Mesopotamia"[1][2] for his wisdom and wonderworking abilities, was the second bishop of Nisibis,[note 2] spiritual father of the renowned Syriac writer and theologian Ephrem the Syrian, celebrated ascetic and one of the 318 fathers of the First Ecumenical Council at Nicaea.

Ascetic
Jacob was born at Nisibis (Antiochia Mygdoniae) towards the end of the third century, the son of Prince Gefal (Armenia).[3] By some accounts he is said the have been nearly related to his contemporary Gregory the Illuminator, the Apostle of Armenia.[note 4] According to St. Eugene (Augin),[note 5] the Venerable St. Jacob came from the tribe and the family of St. James the brother of the Lord.[4]

At an early age he devoted himself to the life of a solitary, practicing the severest self-discipline.[note 6] He liked the solitude and the peace of the desert, and he lived in the mountains around the city of Nisibis, on the border of the Persian and Roman empires. In the summer he lived in crevices of the mountains, and in the winter he lived for a short time in a cave. His food was not what he had sown, but what grew there on its own, such as fruits from wild trees and green plants that grew in the desert. His clothing was made of hard goat's hair.

He always fed on spiritual food which came through prayer which also kept his thoughts pure. Through his asceticism, he gained a deeper connection with God. He had the gift of foresight, and by the grace of the Spirit, he received the gift of miracles.

His contemporary St. Eugene (Augin) was a native of Egypt, who later retreated to Mount Izla near Nisibis, in order to do his missionary work there. At that time, there were many heathens and Marcionists and the fear of God was lost by many. Together, these two great saints worked many miracles and healings, and they baptized many who professed the true faith.

Confessor
During this period of his life he went on a journey to Persia for the purpose of confirming the faith of the Christians there, who were enduring persecutions under Shapur II. Theodoret records several miracles as taking place at this time.[5] In addition, Gennadius reports that Jacob was a courageous confessor during the Maximinian persecution as well.[6] 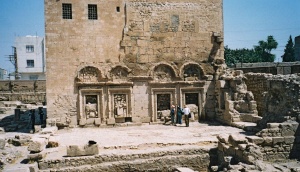 The newly excavated Church of Saint Jacob in Nisibis.

Monastic Bishop
After leading a severe life in the mountains of Kurdistan with St. Eugene (Augin), the founder of Persian monasticism, he became the second bishop of Nisibis in 309. Upon the vacancy of that see, which was his native city, Jacob was compelled by the demand of the people to become their bishop. He was then forced to exchange his desert life with life in the city. Although he moved to the city, he changed neither his food, nor his asceticism, nor his simple clothing. In his new position, he worked especially to help the oppressed, those in need, orphans, widows and the poor, for he was moved by awe and holy fear of Jesus, our Lord and Saviour.

His episcopate, according to Theodoret, was signalized by fresh miracles. A similar tale is told of him as with Gregory Thaumaturgus[7] and Epiphanius,[8] that is, his meeting with two beggars, one of whom while feigning death to impose on him, actually died by divine judgment.[note 7]

In 313 he began to build the great basilica in Nisibis, the ruins of which still bear his name.[9]

As bishop of Nisibis, Jacob was the spiritual father of Ephrem the Syrian, who was baptized by him and remained by his side as long as he lived. The Bishop of Susa, Milles (Milas al-Razi), when visiting Nisibis to attend a synod for settling the differences between the bishops of Seleucia and Ctesiphon, ca. A.D. 341, found Jacob busily engaged in erecting his cathedral, towards which, on his return, he sent a large quantity of silk from Adiabene.[10]

Council of Nicaea
In 325 Jacob was summoned to the Council of Nicaea.[11] A leading part is ascribed to him by Theodoret in the debates of that council, as the champion of the whole Orthodox faith.[note 8] He is commended by Athanasius, together with Hosius, Alexander, Eustathius, and others.[12] According to some Eastern accounts of the council, Jacob was one of those whom the Emperor Constantine marked out for peculiar honour.[13] Nicephorus also adds, that similar to Paphnutius of Thebes, he was noticeable at the Council due to the the seams and scars left by his sufferings;[14] Theodoret however is silent on this point.

Abraham Ecchellensis ascribed to him the compilation of the eighty-four Arabic Nicene canons, the spuriousness of which has been sufficiently proved.[15]

His name also occurs among those who signed the decrees of the Council of Antioch "in Encaeniis" in A.D. 341, of doubtful authenticity,[16] since no mention of his being present at this council occurs elsewhere.[17]

In Jerusalem
Later Bishop Jacob was present at the dedication of the Church of the Holy Sepulcher in Jerusalem, on September 14, A.D. 335.[9]

Death of Arius
The sudden death of the heresiarch Arius at Constantinople, on the eve of his anticipated triumph, A.D. 336, is attributed especially to the prayers of Jacob of Nisibis.[18] This theme is repeated in the Syriac and Roman Martyrology, which state that the prayers of Jacob and Alexander of Constantinople were responsible for the death of Arius and his "bowels gushing out". This tradition has been questioned however.[note 9]

Writings
No writings of Jacob of Nisibis are known, although he has been confused in the past with the fourth century Persian writer Aphrahat (ca.270-ca.345), who was the head of the monastery of Mar Mattai, near modern Mosul, with the rank of bishop and, apparently, the episcopal name Jacob, who composed a series of twenty-three expositions or homilies on points of Christian doctrine and practice.[note 10] The author of the homilies, who was earliest known as "the Persian sage", was a Persian subject, and tells us that he took the Christian name Jacob at his baptism. Hence he was already confused with Jacob of Nisibis by the time of Gennadius (before 496),[note 11] and the ancient Armenian version of nineteen of the homilies was published under this latter name.

Theodoret, from whom we obtain the amplest detail of his life, does not speak of his writings. And Jerome, who mentions him in his Chronicon, does not notice him in his book De Viris Illustribus.[19]

Liturgy
The Liturgy which bears the name of Jacob of Nisibis (Syriac Liturgy of St James), said to have been formerly in use among the Syrians,[20] is certainly not his, but is, rightly, ascribed to James of Sarug.[21][note 12]

Protection of Nisibis
The most famous miracle of St. Jacob was that by which he protected the city of Nisibis from the Persians, as is related by Theodoret both in his religious and ecclesiastical history, by Theophanes, and even by Philostorgius himself, who was a rank Arian, and cannot be suspected of being too favourable to St. Jacob.

After Constantine the Great died in the year 337 and his sons had taken over the kingdom, the Persian king Shapur II (309-379) besieged Nisibis three times over, during his war against the Romans.[note 13] St. Jacob and St. Ephraim prayed with the people in the church each time, asking God to help them. The bishops' intercession during the final siege in 350 saved the city:[note 14] Theodoret offers a particularly vivid picture of his contribution to the defence of the fortress. At the urging of Ephraim and the rest of the inhabitants he ascended the walls of Nisibis to pray for them and curse the Persians.[22]

The bishop would not pray for the destruction of any one; but he implored the divine mercy that the city might be delivered from the calamities of so long a siege. Afterwards, going to the top of a high tower, and turning his face towards the enemy, and seeing the prodigious multitude of men and beasts which covered the whole country, he said: “Lord, thou art able by the weakest means to humble the pride of thy enemies; defeat these multitudes by an army of gnats.” God heard the humble prayer of his servant, as he had done that of Moses against the Egyptians, and as he had by the like means vanquished the enemies of his people when he conducted them out of Egypt. For scarcely had the saint spoken those words, when whole clouds of gnats and flies came pouring down upon the Persians, got into the elephants’ trunks, and the horses’ ears and nostrils, which made them chafe and foam, throw their riders, and put the whole army into confusion and disorder. A famine and pestilence which followed, carried off a great part of the army; and Sapor, after lying above three months before the place, set fire to all his own engines of war, and was forced to abandon the siege and return home with the loss of twenty thousand men.[23] 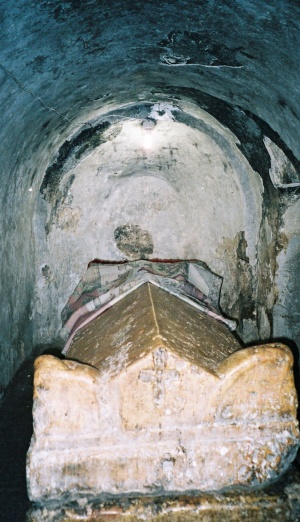 The tomb of Saint Jacob in the crypt of his church in Nisibis.

School of Nisibis
Around A.D. 350 St. Jacob founded the School of Nisibis, after the model of the school of Diodorus of Tarsus in Antioch, in which he himself was an instructor. Through the Holy Spirit he had a strong and holy influence on the hearts of his students.[3] When the Persians conquered Nisibis in 363, the School was moved to Edessa and re-establised there by St. Ephrem the Syrian, where it operated from 363–489.

He was honourably interred within the city, in pursuance, it is said, of an express charge of Constantine the Great to his son Constantius, indicative of the reverance he held for him, that after death his hallowed remains might continue to defend Nisibis against its enemies.

In 361 Julian the Apostate commanded that these sacred remains to be removed without the city. Soon after Julian's death, in order to obtain peace, Emperor Jovian was obliged to yield up Nisibis to the Persians in 363, along with the five Roman provinces situated on the Tigris, and a great part of Mesopotamia.[note 15]

When Nisibis was yielded to the Persian monarch in 363, the Christian inhabitants carried the sacred relics with them, [25] which, according to the Menologion of the Armenians at Venice, were brought to Constantinople about the year 970.