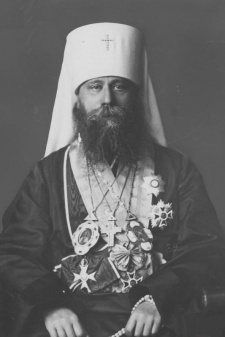 Constantine Nikolaevich Valedinsky was born on May 16, 1879 in Murom, Russia, the second son of a family of clergy through both his father Archpriest Nicholas Pavlovich Valedinsky and mother Elizabeth Spektorskoy. From an early age Constantine assisted his father in the church as sexton, reading, and singing in the choir. In 1885, Constantine entered the Murom religious school for five years, where he excelled in all subjects. On April 30, 1888, his father Nicholas died suddenly from consumption (tuberculosis). Constantine was twelve years old.

In 1890, Constantine was awarded the right to enroll in the Vladimir Theological Seminary without examinations based on his school record in the Murom school. His education at the Vladimir Seminary was interrupted by an attempted assassination of the school's inspector that caused the closing of the seminary. Constantine transferred to the Ufa Theological Seminary, where he graduated in 1896. After graduating from the Ufa Seminary, Constantine entered the Kazan Theological Academy. On September 14, 1897 while a second year student, Constantine made his monastic vows and received the name Dionysius. Soon thereafter he was ordained a deacon, and, in 1899, to the priesthood. In 1900, Fr. Dionysius graduated from Kazan Academy with honors and the degree of candidate of theology. He was recognized for his excellence in teaching and joined the Cathedral Academy in the Department of the Kalmyk language.

In 1901, Fr. Dionysius was appointed professor of biblical and church history at the Tauride Theological Seminary in Simferopol, but was soon transferred to Kholm Theological Seminary as inspector. In 1902, he was elevated to the rank of archimandrite and was appointed rector of Kholm Seminary in Poland. In 1911, Archimandrite Dionysios was assigned as rector of Russian embassy church in Rome.

In 1913, the Holy Synod of the Church of Russia elected Archim. Dionysius auxiliary bishop of Kremenets and Volhynia. He was consecrated on April 21, 1913 in the church of the Great Lavra of the Pochaev Monastery by a large number of bishops headed by the Patriarch of Antioch, Gregory IV, who was on an official visit in Russia.

In 1917-1918, Bp. Dionysius participated in the Local Church Council in Moscow, where he came under strong pressure to join in a declaration to make the Ukrainian church autocephalous. Leaving the council, Bp. Dionysius returned to Kremenets, to his see in Volhynia. In a decree of August 1918 by Patriarch Tikhon, Bp. Dionysius was directed to organize the newly formed Diocese of Polesie [Wikipedia:Polesia] with its see in the city of Pinsk.

In 1919, the sovereign state of Poland was established under the Versailles Treaty. In 1921, Bp. Dionysius successfully opposed the convening of a congress of representatives of Orthodox parishes in Poland, which was to discuss the legal situation of the Orthodox structures in the country. Bp. Dionysius argued that the state authorities at the Congress would be non-canonical and not authorized to make decisions on key ecclesiastical organizational issues, especially as the Church, as situated in Poland, continued to be eparchies of the Russian Orthodox Church. Bp. Dionysius forbade the clergy and laity of his eparchy to send representatives to the congress. The congress did not take place.

In the meantime, the Polish Archbishop George (Yaroshevsky), returned from exile in Italy. As the senior hierarch in Poland, Abp. George was appointed by Patriarch Tikhon of Moscow as the Patriarchal Exarch of the Orthodox Church in the Poland with the title of Archbishop of Warsaw and from September 1921 with the addition to the title of Metropolitan of All Poland. In 1921, he received Polish citizenship.

On January 24, 1922, Bp. Dionysius participated in a council of Orthodox bishops in Poland that was called by Metr. George. This council, which did not include those who opposed a request to the Church of Constantinople for autocephaly, discussed and approved the contents of the Interim Government's regulations concerning the Orthodox Church in Poland. Also, during 1922, Bp. Dionysius was installed as Archbishop of Volhynia and Kremenets.

At a council meeting on May 30, 1922, Abp. Dionysius joined in signing with Metr. George a resolution declaring the Church of Poland independent from the Church of Russia as those bishops opposed to the resolution absented themselves from the meeting. At a follow-on meeting of the council on June 14, 1922, that constituted itself as the Holy Synod, Abp. Dionysius supported the request to the Patriarch of Constantinople for a grant of autocephaly. The synod of bishops then consisted of Metr. George, Abp. Dionysius, and Bp. Alexander (Inoziemcow), as Bps. Eleuteriusza and Vladimir protested the resolution and did not attend.

On February 8, 1923, Metr. George was assassinated at his residence by Archimandrite Smaragd, an opponent of autocephaly for the Church in Poland. As senior bishop in Poland, Abp. Dionysius was declared locum tenens. Then on February 27, 1923, he was elected Metropolitan of Warsaw and Volhynia and all the Orthodox Church in Poland. Metr. Dionysius was enthroned on April 29, 1923 in the Cathedral of St. Mary Magdalene in Warsaw. Metr. Dionysius continued the effort to obtain autocephaly.

Although efforts to obtain autocephaly began during the time of Patr. Meletius IV, it wasn't until the patriarchal synod of Constantinople under Patr. Gregory VII that a decision was affirmed on November 11, 1924. Patr. Gregory signed the tomos of autocephaly on November 13, 1924. Autocephaly was formally announced at a council in Warsaw on September 17, 1925.

In 1925, Metr. Dionysius blessed the opening of the School of Orthodox Theology at the University of Warsaw, where he taught. He also established seminaries in Kremenets and Vilnius

During the following two decades, Metr. Dionysius was constantly confronted with the task of defending the Orthodox Church and its faithful from the actions of the government that supported the Roman Catholic Church in a series of law suits to recover the property held by the Orthodox Church as well as actions to destroy Orthodox churches. Appeals to the government were without success.

Metr. Dionysius' position became untenable following the end of World War II as the new Polish government came under the influence of the Soviet Union and the Church of Russia. In 1946, he received a letter from Patr. Alexei of Moscow noting the autocephaly of 1924 was null and void. Additionally, the Polish government called for the election of a new metropolitan. On February 2, 1948, Metr. Dionysius was placed under house arrest in the city of Sosnowiec, and the new Polish communist president Bierut withdrew recognition of the Metropolitan as head of the Polish Autocephalous Orthodox Church. The Ecumenical Patriarchate continued to recognize Metr. Dionysius as the ruling hierarch of Poland until his death in 1960.

On May 15, 1958, the government authorities allowed Metr. Dionysius to return to Warsaw in response to a request in which he noted the disastrous effect living in Sosnowiec was having on his health. Metr. Dionysius died on March 15, 1960 in the parish house at the former Alexander Nevsky Cathedral in Warsaw. In accordance with his wishes, Metr. Dionysius was buried at the Orthodox cemetery of the Church of John Climacus in Wola, Poland.

Recognized by the Church of Russia

Recognized by the Ecumenical Patriarchate