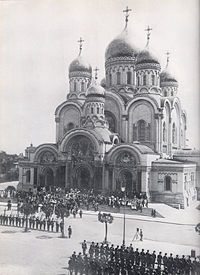 Cathedral of Alexander Nevsky was an Orthodox cathedral in Warsaw, built by the Church of Russia between 1894 and 1912 and destroyed during the years 1924-1926 after Poland regained its independence.

The idea of building a new Orthodox cathedral in Warsaw, while it was in the Russian Empire, came from the Tsarist governor Josif Khurko. In a letter sent to Tsar Alexander III he stated that the churches built so far in Warsaw could not serve all the Russian Orthodox population, which exceeded 40 thousand people. He also proposed that a new, splendid Orthodox church would show Russian domination in the region as well as serve the expanded Orthodox population.

The tsar responded positively to Khurko's letter and inaugurated a committee to organise the construction of the new church. Many Russian citizens donated money toward the construction expenses, while the remainder of the necessary funds was collected from taxes. In 1900, the first phase of construction was completed and a special group of Petersburg artists started decorating the interior with mosaics, frescoes and precious stones. Next to the Cathedral, a belltower was erected. It was 70 metres high and was the tallest building in contemporary Warsaw. There were fourteen bells, of which the largest one was also one of the biggest in Russian Empire. The Cathedral was opened on May 20, 1912.

Only three years later, the Russian population began leaving Warsaw as World War I began, in fear of it becoming the frontline. The Orthodox clergy took with them most of liturgic objects. After the German troops entered Warsaw, they pillaged the church (removing the whole roof), then turned it into their Protestant military chapel. In 1918, they retired from the city and the Cathedral was abandoned again.

After Poland regained its independence, Polish nationalist circles started lobbying for the Cathedral's immediate destruction. They claimed that the building was no longer necessary (Russian community in Warsaw was smaller after the war) and that its architecture did not fit the area. They also repeated that the Cathedral was built for political and not religious reasons. The Polish intellectuals and Social Democrats defended the church, underlining its high artistic value and reminding all about freedom of faith that was declared in the Polish constitution. There was also a project to turn the Cathedral into a Roman Catholic church. However, the nationalist position finally won, and the Cathedral was torn down between 1924 and 1926 with the use of explosives. Only some of the mosaics were saved. These have since been preserved in the Church of Mary Magdalen in Warsaw.