The first presence of Orthodoxy in New York City can is traced to 1870, when Father Nicholas Bjerring, a convert from Denmark, was directed by Metropolitan Isidore of St. Petersburg to open the first Orthodox Church in New York City. Services for the congregation were held in a chapel within Fr. Nicholas's house. In 1885 the Russian government withdrew its support of the mission due to the small membership. 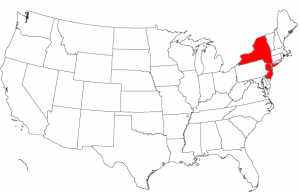 Visual representation of the Diocese of New York and New Jersey

In 1895, a second mission in New York City was established called The Russian Greek Orthodox Church of St. Nicholas, and began to flourish under the direction of its second pastor, Father Alexander Hotovitzky (also recently glorified by the Russian Orthodox Church). In 1901, Bishop Tikhon (later Patriarch Tikhon) laid the cornerstone for the new Cathedral of St. Nicholas from which he would direct the American church until he was called back to Russia in 1907. The cathedral was completed in 1904, and in 1905, the Russian see transferred to New York from San Francisco.

The cathedral served the needs of Orthodox Christians in New York and throughout the country until 1926, when as a fallout of the Bolshevik Revolution in Russia the building was declared the legal property of American representatives of the "Living Church". The head of the Russian Mission, Metropolitan Platon was restrained from further use of archdiocesan property. Temporary facilities were used until 1943 when a former German Methodist church at 59 East Second Street was purchased and renovated. It was dedicated to the Protection of the Most Holy Theotokos. Over the next 31 years, the 2nd Street cathedral served as the headquarters of the church in America, housing offices of the chancery and related national organizations, and convening meetings of the Metropolitan Council, the Holy Synod of Bishops (known until autocephaly as the "Great Council of Bishops"), and several All American Church Sobors. For many years most episcopal consecrations and ordinations to the diaconate and priesthood also took place there.

Local Diocese of the Ruling Hierarch

Orthodoxy in America recognizes as its beginning the arrival of Orthodox missionaries at Kodiak Island in 1794. The administrative center of the Mission in America, with the eventual sale of Alaska to the United States in 1867, gradually moved from Sitka to San Francisco in 1872. By the time that Bp. Tikhon arrived as administrator in 1898 and had made several extended pastoral journeys, it was obvious that the concentration of parishes and faithful was in the eastern United States. He recommended that the official name of the Mission be changed to the "Diocese of the Aleutians and North America" and suggested that the diocesan see be transferred to New York. This occurred in 1905. From that time until 1980 the parishes in the New York-New Jersey geographic area were officially under the auspices of the ruling hierarch of what is now the Orthodox Church in America (OCA).

Being close to the national Church's administrative center (both when it was located in New York City and since 1974 in Oyster Bay Cove/Syosset, NY) and to St. Vladimir's Seminary has allowed the Diocese to benefit from the leadership of the Church in America. Workshops and conferences on religious education and liturgical music, as well as lecture series for adults have taken place throughout the Diocese at various times and places over the last 40 years.

At the 6th All-American Council, it was announced by the Holy Synod of Bishops that a new Diocese of Washington DC was created that would begin functioning in 1981 and that the nation's capital city would become the see of the Primate of the Orthodox Church in America.

In 1981, the Diocese ceased being the responsibility of the Metropolitan and became one of the territorial Dioceses under its own hierarch, Bishop Peter, since 1990 recognized as Archbishop of New York and New Jersey. Under his guidance the Diocese has strived to balance the demands for stability and growth.

The Former Diocese was to be challenged by the same realities that confront many Orthodox Christians throughout America. Its urban communities had been shaken by deteriorating neighborhoods and the relocation of parishioners either to the suburbs or out of the area. The fragility of employment and lack of job security even within previously dependable companies have forced many to move more frequently than what might have been considered normal in the past. The Diocese has witnessed during the first years of the 20th century the early seeds of pan-Orthodox unity as proclaimed in the vision of Abp. Tikhon.

Yet since the World War I, it had seen attempts at realizing this unity foiled by the tendencies of each traditionally Orthodox ethnic group to minister primarily to the needs of its own people. It has been threatened by its own internal tensions and those caused by the administrative turmoil and confusion apparent within the Russian Orthodox Church since the time of the Revolution.

It has needed to defend its own administrative structure in battles within the American legal system. But areas of the Diocese (particularly in north and central New Jersey and the Triple Cities area of upper New York State) have also participated in a growing sense of interdependence and cooperation among the various Orthodox groups; something that brings great hopes for the future. Above all, the Diocese is challenged, as has been each generation of Christians, to respond and bear witness to the expression of the Orthodox Faith in ways that are both "Traditional" (in the sense of handing down what has been given) and creative (unique and sensitive to the questions and demands of its time).

Other institutions established in the New York-New Jersey area of this time to meet both the religious and social/economic needs of the immigrants were:

The initial establishment of parishes in the Diocese closely paralleled the immigration patterns of the immigrants who came before and after the First World War and in connection with the consequences of the Bolshevik Revolution. Approximately half of the present 50 parishes began during this period (1894-1930). The energetic ministry of Fr Alexander Hotovitzky (1895-1914) should be recognized as a significant feature of these early years. Fr. Alexander, as Dean of the St. Nicholas Cathedral in New York, was instrumental in the formation of several Diocesan parishes (as well as some outside of the Diocese):

The Russian Orthodox Church, in recently glorifying Fr. Alexander and Fr. John Kochuiov, emphasizes their deaths as martyrs that took place after their return to Russia. But for the OCA, their significance as Orthodox missionaries in America was affirmed in the words of Metropolitan Theophilus: "The American Orthodox Russian people stand on four corners - Bishop Nicholas, Fathers Hotovitzky, Kochurov, and Nedzelnitsky."

A later period (from 1958 to 1981) might be called the "time of mission". This is characterized by parishes located in suburban areas (rather than the industrial centers of the first period), by the often pan-Orthodox or pan-ethnic make up of the congregations, and by the resulting use of English as the primary liturgical language. Here, the pastoral work of Fr. John Nehrebecki, Dean of the New Jersey Deanery for over thirty years, should be mentioned. Under his guidance the following churches were founded:

In between or overlapping these two periods, there are several diocesan parishes which, while being organized primarily to meet the needs of immigrants coming out of the Second World War, have also ministered to those who have come from particularly Slavic lands throughout this century and to this day. These parishes would include:

Other parishes throughout the Diocese, even within the suburbs, have needed to consider the incorporation of recent immigrants from former Soviet Union, Eastern Europe, and the Middle East, which has required some flexibility in pastoral and liturgical practices.

His Grace, the Rt. Rev Michael (Dahulich) of New York and New Jersey 2010

A consecration Divine Liturgy was concelebrated by Metropolitan Jonah and members of the Holy Synod of Bishops at at Saints Peter and Paul Church, Jersey City, NJ, on Saturday, May 8, 2010. On Sunday, May 9, Metropolitan Jonah and the members of the Holy Synod of Bishops con-celebrated the Divine Liturgy and Enthronement of Bishop Michael was at Holy Virgin Protection Cathedral, 59 East Second Street, New York, NY.

On July 8, 2010, His Grace Bishop Michael inaugurated a twelve member Council of Presbyters for the diocese as a consultive group for the diocesan bishop.