St. Platon's Orthodox Theological Seminary in Tenafly, New Jersey was the end development of an Orthodox theological seminary in North America in the early twentieth century to support the Russian Mission. The seminary, located in Tenafly, New Jersey, was the culmination of the succession of church schools that began with the first Orthodox seminary in America in New Archangel (Sitka), Alaska founded by Fr. John Vemiaminov- Popov. St. Platon's Seminary closed in 1924 as a result of the financial crises in the Russian Mission after the Bolsheviks assumed control of the Russian government.

The first seminary in America was established in New Archangel in 1845 to prepare native priests for the new diocese in Alaska. In 1858, the seminary was transferred to Yakutsk in Siberia, when, the then diocesan bishop, Archbishop Innocent was transferred to lead the diocese from its new see in Yakutsk. While the seminary was moved to Siberia, education in theology remained available in Sitka as part of the school system established in Alaska by the Church. The school was known as the Innocentialn Missionary School.

When the seat for the Diocese of the Aleutian Islands and Alaska was moved to San Francisco in 1872 a missionary school was formed in San Francisco. As the Orthodox presence in the eastern and mid western parts of the United States grew a shift of theological education occurred. The education center was moved by Bp. Nicholas to Minneapolis, Minnesota. There, the Minneapolis Missionary School was opened in 1897. Within a few years the growth in the student body made necessary an expansion of the school facilities. A Seminary Commission was formed by Abp. Tikhon to explore the formation of a seminary for the North American diocese. After favorably receiving the findings of the commission, Abp. Tikhon transferred the missionary school from Minneapolis to Cleveland, Ohio and replaced it in Minneapolis with the first American Orthodox Theological Seminary. On July 1, 1905, as a result of the reorganization, the North American Ecclesiastical Seminary was established.

The first dean of the new seminary was Fr. Constantine Popov, a graduate of the Vologda Seminary in Russia. In 1906, Fr Leonid Turkevich was appointed rector and dean of the seminary. During the time the seminary remained in Minneapolis, the Divine Liturgy and other church services were celebrated in English.

As the main area of growth of the North American mission in the first decade of the twentieth century was in the northeastern part of the United States, the majority of students for the seminary came from that area. Additionally, the administrative center of the diocese was also in New York City. After an evaluation of the situation, a decision was made to move the seminary from Minneapolis to the eastern states to be closer to the student population and the Church administration. 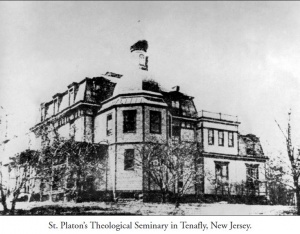 St. Platon's Orthodox Theological Seminary - Tenafly, New Jersey
In 1912, the diocese bought a fourteen and a half acres estate with a large mansion near Tenafly, New Jersey as the home for the seminary. The seminary was then moved from Minneapolis and renamed St. Platon's Orthodox Theological Seminary. The mansion was large enough that it housed the dormitory, classrooms, offices, and a chapel that was dedicated to St. Platon, the Confessor of the Studios.

The academic program at the seminary was four years long. leading to the award of a diploma. During the first year students studied the Old and New Testaments; dogmatics; fundamental, moral and pastoral theology; history of the early Church, the Russian Church, and sectarianism; homiletics; liturgical practice, and catechism. The second year consisted of philosophical and scientific studies including philosophy, history of philosophy, logic, psychology, physiology, hygenics, physics, mathematics, and pedagogics. The third year covered philological studies including Russian and English language and grammar, history of Russian and English literature, English literature, and lexicography. In the final year, the course included studies of political sciences including sociology; histories of Russia, the United States, and Western civilization; and Church music.

Admission to the seminary was granted on the basis of a candidate successfully completing an entrance examination, a favorable recommendation from the candidate's parish priest, and an evaluation of the candidate's desires and motivation for entering the seminary.

No sooner than the seminary began operation, tragedy struck the seminary as the Bolsheviks came to power in Russia. The loss of financial assistance from the Church of Russia in 1918 led to severe financial distress for the seminary. Classes in the fall of 1918 were delayed until October while an urgent appeal to the parishes was made for funds to operate the school. By the time of the Second All-American Sobor of 1919 the seminary needed $22,500.00 to satisfy debts and continuing operation. Classes continued until 1922 at Tenafly before the seminary operation was moved to the Russian National Home in New York City. In 1924, the seminary closed due to the lack of financing.

After the closing of St. Platon's Seminary, the Orthodox Church in North America was without formal education institutions until the latter part of the 1930s. In 1937, the Greek Orthodox Archdiocese established a theological school at Pomfret, Connecticut. and, in 1938, the Russian Mission established St. Vladimir's Seminary in New York City and St Tikhon's Seminary in South Canaan, Pennsylvania