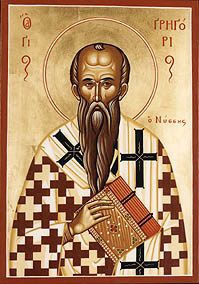 St. Gregory of Nyssa, one of the Cappadocian Fathers.
Our father among the saints Gregory of Nyssa (ca. A.D. 335 – after 384) was bishop of Nyssa and a prominent theologian of the fourth century. He was the younger brother of Basil the Great and friend of Gregory the Theologian. He is commemorated on January 10.

Gregory was raised in a very pious (and large) Christian family of ten children; his grandmother Macrina the Elder, his mother Emily, his father Basil the Elder, his sisters Macrina the Younger and Theosebia, and his brothers Basil the Great and Peter of Sebaste have all been recognized as saints. He received a good education and taught rhetoric at one point. In 372, his brother Basil ordained him the bishop of Nyssa in Cappadocia (in present-day Turkey).

Gregory and Basil both spent much effort defending the Faith against the attacks of the Arians. He was twice deposed from his see because of false accusations made by heretics. He was finally restored in 378.

The next year, 379, his brother Basil the Great died. As the two were extremely close, Gregory was very grieved at his loss. To honor his brother, Gregory wrote his funeral oration and then completed Basil's Hexaemeron ("Six Days"), a series of nine sermons, delivered during Great Lent, which described and elaborated upon the Genesis account of the world's creation in six days. The following year, Gregory's sister Macrina also died, and Gregory wrote a hagiography detailing her life.

About this time Gregory attended the Council of Antioch, a local synod, in which he zealously defended Orthodoxy. The council was called to refute a heresy which denied the perpetual virginity of the Theotokos. The council also forbade worship of her as God or part of the Godhead. Gregory was simultaneously continuing to fight Arianism. He also attended the Second Ecumenical Council in Constantinople, which added the final section concerning the Holy Spirit to the Nicene-Constantinopolitan Creed.

For the rest of his life, Gregory continued to attend church councils, discuss doctrinal matters, and combat various heresies. He reached old age and finally reposed in the Lord near the end of the fourth century.

Gregory's influence on Church doctrine has remained important, and while influenced by the work of Origen (who was eventually condemned by the Church centuries after his death), his writings are prominent among the early Church Fathers.

Gregory is remembered above all for two major contributions to theology. The first is his doctrine of the Trinity, a development of the theology of Basil and their mutual friend Gregory Nazianzus. Following Basil's lead, Gregory argues that the three Persons of the Trinity can be understood along the model of three members of a single class: thus, the Father, Son, and Holy Spirit are three in the same way that Peter, Paul, and Timothy are three men. So why do we not say there are three Gods? Gregory answers that, normally, we can distinguish between different members of the same class by the fact that they have different shapes, sizes, and colours. Even if they are identical, they still occupy different points in space. But none of this is true of incorporeal beings like God. Even lesser spiritual beings can still be distinguished by their varying degrees of goodness, but this does not apply to God either. In fact, the only way to tell the three Persons apart is by their mutual relations — thus, the only difference between the Father and the Son is that the former is the Father of the latter, and the latter is the Son of the former. As Gregory puts it, it is impossible to think of one member of the Trinity without thinking of the others too: they are like a chain of three links, pulling each other along.

Gregory's second main contribution is his spiritual theology. He is the first Christian theologian to argue for the infinity of God. Origen, often called a major influence on Gregory, had explicitly argued that God is limited, an essential notion in Platonism, since to be limited is to be clearly defined and knowable. Gregory, however, argues that if God is limited he must be limited by something greater than himself; he is therefore without boundaries. The idea had already been developed by neoplatonic philosophers, especially Plotinus, another important influence on Gregory, but he is the first Christian to defend it, apart from some hints in the work of Irenaeus.

Accordingly, Gregory argues that since God is infinite he cannot be comprehended. In contrast, Origen had spoken of the spiritual journey as a progression of increasing illumination, as the mystic studies Scripture and comes to learn more about God.

Gregory speaks of three stages of spiritual progression: initial darkness or ignorance, then spiritual illumination, and finally a darkness of the mind in contemplation of the God who cannot be comprehended. (See apophatic theology.)

Like earlier authors, including the Jewish Philo of Alexandria, he uses the story of Moses as an allegory for the spiritual life. Moses first meets God in the burning bush, a theophany of light and illumination, but then he meets him again in the cloud, where he realizes that God cannot be seen by the eyes. Ascending Mount Sinai, he finally comes to the "divine darkness", and realizes that God cannot be known by the mind either.

It is only through not-knowing and not-seeing that God can, paradoxically, be known and seen. This notion would be extremely influential in both Western and Eastern spirituality, via the mystical writings of Pseudo-Dionysius the Areopagite. Thus he is a major figure in the history of apophatic theology and spirituality.

Related to this is Gregory's idea of epektasis or constant progress. Platonic philosophy said that stability is perfection and change is for the worse; in contrast, Gregory described the ideal of human perfection as constant progress in virtue and godliness. In Gregory’s theology, God himself has always been perfect and has never changed, and never will. Humanity fell from grace in the Garden of Eden, but rather than return to an unchanging state, humanity's goal is to become more and more perfect, more like God, even though humanity will never understand, much less attain, God's transcendence. This idea has had a profound influence on the Eastern Orthodox teaching regarding theosis or "divinization".

Gregory also taught that while it cannot be known whether or not all humans will be saved, as Origen speculated, faithful Christians may hope and pray for the salvation of all, even after death. He thus presents a hopeful alternative to those theologies, such as that of Augustine, which state that at least some, of necessity, will be eternally condemned to hell.

"When we lay bare the hidden meaning of the history, scripture is seen to teach that the birth which distresses the tyrant is the beginning of the virtuous life. I am speaking of the kind of birth in which free will serves as the midwife, delivering the child amid great pain. For no one causes grief to his antagonist unless he exhibits in himself those marks which give proof of his victory over the other." -- The Life of Moses

"A greedy appetite for food is terminated by satiety and the pleasure of drinking ends when our thirst is quenched. And so it is with the other things... But the possession of virtue, once it is solidly achieved, cannot be measured by time nor limited by satiety. Rather, to those who are its disciples it always appears as something ever new and fresh."

"The soul has followed Moses and the cloud, both of these serving as guides for those who would advance in virtue; Moses here represents the commandments of the Law; and the cloud that leads the way, its spiritual meaning. The soul has been purified by crossing the Sea; it has removed from itself and destroyed the enemy army. It has tasted of the waters of Marah, that is, of life deprived of all sinful pleasure; and this at first had seemed bitter and unpleasant to the taste but offered a sensation of sweetness to those who accepted the wood. Next it enjoyed the beauty of the palm trees of the gospel and the springs; it filled itself with the living water, that is, the rock. It took within itself the bread of heaven. It overwhelmed the foreign host—a victory due to the extended arms of the Lawgiver, which thus foreshadowed the mystery of the Cross. Only then can the soul go on to the contemplation of transcendent Being."