A page of the Vienna Genesis, made in sixth century Syria, with an illustration of Jacob/Israel blessing his grandsons Ephraim and Mannasseh. 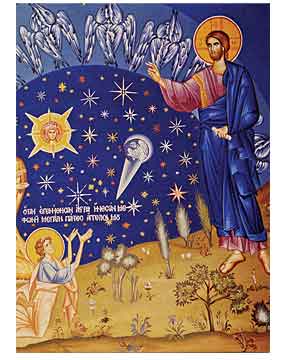 An icon of God creating light, in the form of the stars in the sky, on the fourth day of the Genesis creation story.

The Book of Genesis, also known as the First Book of Moses, is the first book of the Old Testament and contains extremely old oral and written traditions of the people of Israel. The English title, Genesis, comes from the Greek translation (Septuagint, LXX)[1] meaning "origins"; whereas, the Hebrew title is derived from the opening sentence of the book, translated "in the beginning". Tradition has it that this book was mostly written by the Prophet Moses[2] 1,300 years before Christ. The influence of Genesis over all of Holy Scripture is demonstrated by it being quoted over 35 times in the New Testament and hundreds of allusions appearing in both Testaments. The story line of salvation begins in Genesis 3 and is not completed until Revelation 21 and 22, where the eternal kingdom of redeemed believers is illustrated.

The author does not identify himself in Genesis. However, both the Old Testament [3] and the New Testament [4] ascribe this composition to Moses [5] even though the context of the story ends almost three centuries before Moses is even born. No compelling reasons have ever come forth to challenge this authorship.

This is the book of "beginnings". It is widely accepted [6], that it contains the early history of man and of Israel, theological themes revealed to man by God Himself.

The origins of humanity start with the story of creation of the world, the fall of Adam and Eve and the subsequent history of their descendants. It tells of Noah and the great flood, the tower of Babel, and Abram and Melchizedek and the early history of Israel, starting with the three patriarchs of the Hebrews, Abraham, Isaac, and Jacob, and the twelve tribes that were their descendants.

The main theme throughout all of this history is that God's call and promise of salvation for Israel.

The Book of Genesis covers the longest time span of any book in the Bible. It starts with the creation of the world and concludes as the Hebrews head to Egypt. Genesis is not treated as mere history, but as a source of spiritual wisdom and a book inspired by God himself. The first three chapters of Genesis are reflected in the last three chapters of Revelation, the Alpha and Omega of writings "given by inspiration of God." (2 Tim 3:16). Out of all historical information available to Moses, he selected only what was related to the religious life of people. It most likely has been edited for this goal over time.

Almost all of Genesis is read by a reader at services of the Orthodox Church during Great Lent and Holy Week.

At Vespers before the Nativity of the Theotokos, the reading is from 28:10-17, the story of Jacob's vision of a ladder which unites heaven and earth. This passage indicates the union of God with men which is realized most fully and perfectly, both spiritually and physically, in Mary the Theotokos, Bearer of God.