The Pentateuch is a term referring to the first five books of the Old Testament. It comes from the Greek penta ("five"), and (τεύχος) teukhos, ("implement" or "volume"), meaning the five volumes or implementation of five books. It may also be translated as "five-fold scroll." In Judaism, is it called the Torah, or teaching, and the Law of Moses. The Pentateuch consists of the Bible's books of: 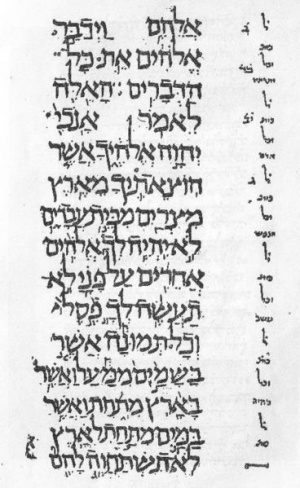 A portion of the Pentateuch in Hebrew, specifically Exodus 20:1-5, the beginning of the Ten Commandments.

Genesis begins with the primeval history: the story of creation and the garden of Eden (Genesis 1-3), the account of the descendants of Adam to the rise of Noah who survives a great flood (Genesis 3-9), and the account of the descendants of Noah through the tower of Babel to the rise of Abram (Abraham) (Genesis 10-11). Next follows the story of the patriarchs: Abraham, Isaac, and Jacob, and the life of Joseph (Genesis 12-50). God gives to the patriarchs a promise of the land of Canaan, but at the end of Genesis the clan of Jacob ends up leaving Canaan for Egypt because of a famine.

Exodus describes the rise of Moses, who leads the Israelites out of Pharaoh's Egypt (Exodus 1-18) and into Mount Sinai/Horeb where he mediates to them God's covenant and laws (Exodus 19-24), deals with the violation of the law when Israel makes the Golden Calf (Exodus 32-24) and instructs them on building the tabernacle (Exodus 25-31; 35-40).

Leviticus begins with instructions about how to use the tabernacle that the Israelites had just built (Leviticus 1-10), followed by a long enumeration of the rules of cleanliness (Leviticus 11-15), the Day of Atonement (Leviticus 16), and various moral and ritual laws sometimes called the Holiness Code (Leviticus 17-26).

Numbers describes two censuses in which the number of Israelites are counted (Numbers 1-3, 26), with many laws mixed among the narratives. The narratives tell how Israel consolidated itself as a community at Sinai (Numbers 1-9), set out from Sinai to move towards Canaan and spied out the land (Numbers 10-13). Because of unbelief at various points, but especially at Kadesh Barnea (Numbers 14), the Israelites were condemned to wander for forty years in the desert in the vicinity of Kadesh instead of immediately entering the land of promise. Even Moses sins and is told he would not live to enter the Promised Land (Numbers 20). At the end of Numbers (Numbers 26-35) Israel moves from the area of Kadesh towards the Promised Land. They leave the Sinai desert and go around Edom and through Moab where Balak and Balaam oppose them (Numbers 22-24; 31:8, 15-16). They defeat two Transjordan kings, Og and Sihon (Numbers 21), and so come to occupy some territory outside of Canaan. At the end of the book they are on the plains of Moab opposite Jericho ready to enter the land.

Deuteronomy consists primarily of a series of speeches by Moses on the plains of Moab opposte Jericho exhorting Israel to obey God and giving further instruction on the laws. At the end of the book (Deuteronomy 34) Moses is allowed to see the promised land from a mountain, but dies and is buried by God before Israel begins the conquest of Canaan. It is believed by many scholars to be a later summation of the first four books with the death of Moses and events leading up to it added.

The Pentateuch is traditionally believed to have been written down by Moses. Hence Genesis is sometimes called the first book of Moses, Exodus the second book of Moses, and so forth. In its current form, each successive book of the Pentateuch picks up and continues the story of the previous book to form a continuous story. Hence Genesis tells how the Israelites went to Egypt while Exodus tells how they came to leave Egypt. Exodus describes the building of the tabernacle at Sinai while in Leviticus Moses is given rules while at Sinai for offering sacrifice and worship at that tabernacle. In Numbers the Israelites leave Sinai and travel eventually to the plains of Moab while in Deuteronomy Moses gives speeches about the law on the plains of Moab.