Nativity of the Theotokos 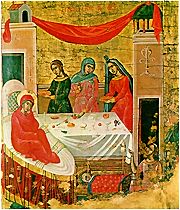 The Nativity of the Theotokos

The Nativity of the Theotokos is one of the Great Feasts of the Orthodox Church, celebrated on September 8 (For churches still using the old Julian Calendar - for liturgical purposes - September 8 falls on September 21 of the Gregorian Calendar. In other words, "Old Calendar" Churches, such as the Russian Orthodox Church, still celebrate the Nativity of the Theotokos on the 8th, but the day is actually the 21st according to the everyday calendar that is used in society at large).

The Holy Virgin and Theotokos Mary was born to elderly and previously barren parents by the names of Joachim and Anna, in answer to their prayers. Orthodox Christians do not hold to the Roman Catholic doctrine of the Immaculate Conception of Mary, in which it is supposed that Mary was preserved from the ancestral sin that befalls us all as descendents of Adam and Eve, in anticipation of her giving birth to the sinless Christ. The Orthodox believe that Mary indeed received the ancestral sin, having been conceived in the normal way of humanity, and thus needed salvation like all mankind. Orthodox thought does vary on whether Mary actually ever sinned, though there is general agreement that she was cleansed from sin at the Annunciation.

Divine Liturgy is served on the day on the feast. The epistle reading is from Philippians 2:5-11, and speaks of "Christ Jesus, who, being in the form of God, did not consider it robbery to be equal with God, but made Himself of no reputation, taking the form of a bondservant, and coming in the likeness of men." The gospel reading is taken from Luke 10:38-42 and 11:27-28 together; this reading is also always read on all feasts of the Theotokos. In it, the Lord says, "blessed are those who hear the word of God and keep it!"

Your Nativity, O Virgin,
Has proclaimed joy to the whole universe!
The Sun of Righteousness, Christ our God,
Has shone from You, O Theotokos!
By annulling the curse,
He bestowed a blessing.
By destroying death, He has granted us eternal Life.

By Your Nativity, O Most Pure Virgin,
Joachim and Anna are freed from barrenness;
Adam and Eve, from the corruption of death.
And we, your people, freed from the guilt of sin, celebrate and sing to you:
The barren woman gives birth to the Theotokos, the nourisher of our life!

Today from the stem of Jesse and from the loins of David,
The handmaid of God Mary is being born for us.
Therefore all creation is renewed and rejoices!
Heaven and earth rejoice together.
Praise her, you families of nations,
For Joachim rejoices and Anna celebrates crying out:
"The barren one gives birth to the Theotokos, the Nourisher of our life!"

Today the Virgin Theotokos Mary
The bridal chamber of the Heavenly Bridegroom
By the will of God is born of a barren woman,
Being prepared as the chariot of God the Word.
She was fore-ordained for this, since she is the divine gate and the true Mother of Life.