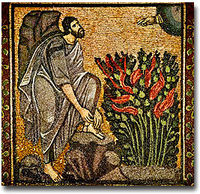 Moses and the Burning Bush.

The Burning Bush is a phenonenon (miracle) described by the Book of Exodus (3:1-21) as being located on Mount Horob at which Moses was appointed by God to lead the Israelites out of Egypt and into Canaan. The narrative relates that the bush was on fire, but was not consumed by the flames, hence the name.

In Orthodox Christian tradition, as defined by the Church Fathers and the Ecumenical councils, the flame Moses saw was in fact God's Uncreated Energies/Glory, manifested as light, thus explaining why the bush was not consumed. It is not interpreted as a miracle in the sense of an event, which only temporarily exists, but is instead viewed as Moses being permitted to see these Uncreated Energies/Glory, which are considered to be eternal things. The Orthodox definition of salvation is this vision of the Uncreated Energies/Glory, and it is a recurring theme in the works of Greek Orthodox theologians such as John S. Romanides. 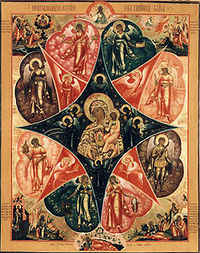 In Eastern Orthodox parlance, the preferred name for the event is The Unburnt Bush, and the theology and hymnography of the church view it as prefiguring the virgin birth of Jesus. Orthodox theology refers to Mary, the mother of Jesus as the Theotokos ("God bearer"), viewing her as having given birth to Incarnate God without suffering any harm, or loss of virginity, in parallel to the bush being burnt without being consumed.[1] There is an Icon by the name of the Unburnt Bush, which portrays Mary as God bearer. the icon's feast day is celebrated on September 4.[1]

While God speaks to Moses in the narrative, Orthodox belief is that the angel was also heard by Moses and interprets the angel as being the Logos of God, regarding it as the Angel of Great Counsel mentioned by the Septuagint version of Isaiah[2], that in the masoretic text is rendered Counsellor, Almighty God.