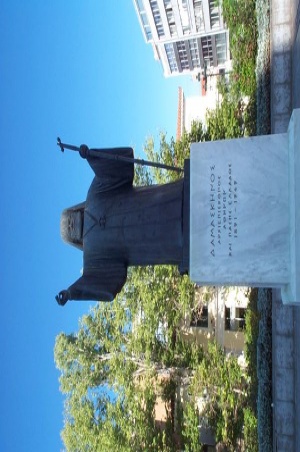 Statue of Archbishop Damaskinos near the Metropolitan Cathedral of Athens

His Beatitude Damaskinos (Papandreou) of Athens and All Greece was the primate of the Church of Greece for two periods: in 1938 for a month and from 1941 to 1949 during the Second World War. He also served as regent of Greece between the retreat of the German occupation force from Greece in 1944 and the return of King George II in 1946. His rule marked the reconstruction of Greece after German occupation during World War II and the unrest spanning the beginning of the shooting phase of the Greek Civil War.

He was born George Papandreou in Dorvitsa in the province of Nafpaktos on March 3, 1891. His uncle Christophoros, the superior of the Monastery of Koroni, facilitated George's studies at Karditza. George later attended the University of Athens, studying both theology and law and receiving high honors in both. Following service in the Greek army during the Balkan Wars, he was ordained a deacon in 1917 and assigned as managing secretary of the Archdiocese of Athens. The political dispute in Greece at the time between Royalists and Venizelists had made its way deeply into the church, but the young deacon managed to remain above the fray. In 1918, he was ordained to the priesthood, elevated to the dignity of Archimandrite and assigned by Archbishop Meletios as abbot of the Petraki and Penteli monasteries.

One of his first assignments was to serve as a mediator on Mount Athos among rival factions of Greek, Serbian, and Bulgarian monks. Overseeing the situation, he brought peace to the community, and drafted the new charter of the Holy Mountain. On December 16, 1922, Damaskinos was elected by the Holy Synod of the Church of Greece as Metropolitan of Corinth.

Metropolitan of Corinth - Arbiter in America

On April 22, 1928, Corinth was destroyed by a massive earthquake. Damaskinos led a massive effort to raise funds for the reconstruction of the city, which prompted him to tour American cities to solicit the help of the Greek-American community. While in America, he witnessed the difficulties which the Greek community was experiencing and was solicited by the leaders of the community to offer assistance. When the Ecumenical Patriarchate and the Church of Greece resolved to address the matter shortly thereafter, Damaskinos was prevailed upon to accept an appointment as Patriarchal Exarch to investigate and offer a resolution to the crisis. He arrived in New York on May 20, 1930 and spent the next nine months working with clergy and lay representatives. It was Damaskinos who recommended that Metropolitan Athenagoras of Corfu be sent to America to replace the incumbent Archbishop Alexander.

On November 5, 1938 he was elected Archbishop of Athens. John Metaxas, dictator of Greece at the time, objected to Damaskinos and forced the cancellation of his election on December 1, 1938, and the appointment of Metropolitan Chrysanthos to the post. After the 1941 German invasion of Greece and the fall of the Greek government, the metropolitans who had elected Damaskinos seized the opportunity to eject Chrysanthos from the throne (with German agreement, as the latter had refused to be present at the oath-taking ceremony of the quisling Prime Minister Georgios Tsolakoglu), and Damaskinos was reinstalled. 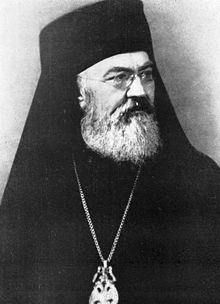 Damaskinos worked very hard to live up to his position during those difficult years. He frequently clashed with the German authorities and the quisling government. In 1943, the Germans began the persecution of the Jews of Greece, and their deportations to Nazi concentration camps. Damaskinos formally protested the actions of the occupational authorities.

According to The International Raoul Wallenberg Foundation the appeal of Damaskinos and his fellow Greeks is unique as no document similar to the protest against the Nazis during World War II has come to light in any other European country.

The letter reads, in part:

"The Greek Orthodox Church and the Academic World of Greek People Protest against the Persecution... The Greek people were... deeply grieved to learn that the German Occupation Authorities have already started to put into effect a program of gradual deportation of the Greek Jewish community... and that the first groups of deportees are already on their way to Poland...

"According to the terms of the armistice, all Greek citizens, without distinction of race or religion, were to be treated equally by the Occupation Authorities. The Greek Jews have proven themselves... valuable contributors to the economic growth of the country [and] law-abiding citizens who fully understand their duties as Greeks. They have made sacrifices for the Greek country, and were always on the front lines of the struggle of the Greek nation to defend its inalienable historical rights...

"In our national consciousness, all the children of Mother Greece are an inseparable unity: they are equal members of the national body irrespective of religion... Our holy religion does not recognize superior or inferior qualities based on race or religion, as it is stated: 'There is neither Jew nor Greek' and thus condemns any attempt to discriminate or create racial or religious differences. Our common fate both in days of glory and in periods of national misfortune forged inseparable bonds between all Greek citizens, without exemption, irrespective of race...

"Today we are... deeply concerned with the fate of 60,000 of our fellow citizens who are Jews... we have lived together in both slavery and freedom, and we have come to appreciate their feelings, their brotherly attitude, their economic activity, and most important, their indefectible patriotism..."[1]

Damaskinos went on to publish the letter, even though the local SS commander threatened to execute him by firing squad. Damaskinos's famous response to him was: "According to the traditions of the Greek Orthodox Church, our prelates are hung and not shot. Please respect our traditions!"[2]}}

At one point he was required by the Nazis to produce a list of citizens to be shot in response to the killing of a German soldier. Damaskinos gave them a list of Greek bishops with his name at the top of the list. The executions were not carried out.

The churches under his jurisdiction were also ordered quietly by Damaskinos to distribute baptismal certificates to Jews fleeing the Nazis, saving thousands of Romaniote Jews in and around Athens.

After the occupation ended, Damaskinos was proclaimed regent of Greece until the return of the king from exile. During this time, fighting broke out between pro-royalist Greek soldiers and communist partisans. He took control of the situation in his early term, appointing himself Prime Minister during late 1945. Though he wielded little power in his latter term, Damaskinos continued to call for peace and order in the country. He relinquished his position after fighting began to die down and recalled the king formally on September 28, 1946.

Following the regency, he continued to speak out against the oppression of Greeks during the civil war. At one point he appealed to the United Nations and the World Council of Churches for help in halting the seizure of children by guerrillas. He performed the marriage of King Michael of Romania, who had been exiled by the Communist government, and spoke out against the persecution of Cardinal Mindszenty by the government of Hungary.

He died in Athens on May 20, 1949. In 1971, he was postumously recognized by the Yad Vashem Memorial Foundation [[1]] along with the Metropolitan of Thessalonika and other Greek leaders for his efforts in saving Jews during the Occupation.

A statue of Damaskinos stands outside the Metropolitan Cathedral in Athens.