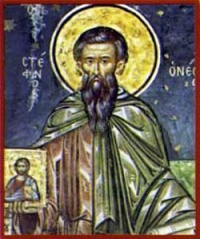 The Monk Martyr and Confessor Saint Stephen the New of Mt. St. Auxentius, also Stephen the Younger (Greek: Ὁ Ὅσιος Στέφανος ὁ Ὁμολογητής ὁ Νέος), 715-767 AD, was a Byzantine monk from Constantinople who became one of the leading opponents of the iconoclastic policies of Emperor Constantine V (741–775). He was martyred in 767 AD, becoming the most prominent iconodule martyr. His feast day is celebrated annually on November 28.

Saint Stephen the New was born in 715 at Constantinople into a pious Christian family. His parents, having two daughters, prayed the Lord for a son. The mother of the new-born Stephen took him to the Blachernae church of the Most Holy Theotokos and dedicated him to God.

During the reign of the emperor Leo the Isaurian (716-741) there was a persecution against the holy icons and against those venerating them. With the support of the emperor, the adherents of the Iconoclast heresy seized control of the supreme positions of authority in the Empire and in the Church. Persecuted by the powers of this world, Orthodoxy was preserved in monasteries far from the capital, in solitary cells, and in the brave and faithful hearts of its followers.

The Orthodox parents of St Stephen, grieved by the prevailing impiety, fled from Constantinople to Bithynia, and they gave over their sixteen-year-old son in obedience to the monk John, who labored in asceticism in a solitary place on the Mount of St Auxentius. St Stephen dwelt with the venerable monk John for more than fifteen years, devoting himself totally to this spirit-bearing Elder, and learning monastic activity from him. Here Stephen received the news that his father was dead, and his mother and sisters had been tonsured as nuns.

After a certain time his teacher John also died. With deep sorrow St Stephen buried his venerable body, and continued with monastic effort in his cave by himself. Soon monks began to come to the ascetic, desiring to learn from him the virtuous and salvific life, and a monastery was established, with St Stephen as the igumen. At forty-two years of age Stephen left the monastery he founded, and he went to another mountain, on whose summit he dwelt in deep seclusion in a solitary cell. But here also a community of monks soon gathered, seeking the spiritual guidance of St Stephen.

Leo the Isaurian was succeeded by Constantine Copronymos (741-775), a fiercer persecutor of the Orthodox, and an even more zealous iconoclast. The emperor convened an Iconoclast Council, attended by 358 bishops from the Eastern provinces. However, except for Constantine, the Archbishop of Constantinople, illegitimately raised to the patriarchal throne by the power of Copronymos, not one of the other patriarchs participated in the wicked doings of this Council, thus making it less likely to style itself as "ecumenical." This council of heretics, at the instigation of the emperor and the archbishop, described icons as idols, and pronounced an anathema on all who venerated icons in the Orthodox manner, and it described icon veneration as heresy.

Meanwhile, the monastery of Mount Auxentius and its igumen became known in the capital. They told the emperor about the ascetic life of the monks, about their Orthodox piety, about the igumen Stephen's gift of wonderworking, and of how St Stephen's fame had spread far beyond the region of the monastery, and that the name of its head was accorded universal respect and love. The saint's open encouragement of icon veneration and the implied rebuff to the persecutors of Orthodoxy within the monastery of Mount Auxentius especially angered the emperor. Archbishop Constantine realized that in the person of St Stephen he had a strong and implacable opponent of his iconoclastic intentions, and he plotted how he might draw him over to his side or else destroy him.

They tried to lure St Stephen into the Iconoclast camp, at first with flattery and bribery, then by threats, but in vain. Then they slandered the saint, accusing him of falling into sin with the nun Anna. But his guilt was not proven, since the nun courageously denied any guilt and died under torture and beatings. Finally, the emperor gave orders to lock up the saint in prison, and to destroy his monastery. Iconoclast bishops were sent to St Stephen in prison, trying to persuade him of the dogmatic correctness of the Iconoclast position. But the saint easily refuted all the arguments of the heretics and he remained true to Orthodoxy.

Then the emperor ordered that the saint be exiled on one of the islands in the Sea of Marmora. St Stephen settled into a cave, and there also his disciples soon gathered. After a certain while the saint left the brethren and took upon himself the exploit of living atop a pillar. News of the stylite Stephen, and the miracles worked by his prayers, spread throughout all the Empire and strengthened the faith and spirit of Orthodoxy in the people.

The emperor gave orders to transfer St Stephen to prison on the island of Pharos, and then to bring him to trial. At the trial, the saint refuted the arguments of the heretics sitting in judgment upon him. He explained the dogmatic essence of icon veneration, and he denounced the Iconoclasts because in blaspheming icons, they blasphemed Christ and the Mother of God. As proof, the saint pointed to a golden coin inscribed with the image of the emperor. He asked the judges what would happen to a man who threw the coin to the ground , and then trampled the emperor's image under his feet. They replied that such a man would certainly be punished for dishonoring the image of the emperor. The saint said that an even greater punishment awaited anyone who would dishonor the image of the King of Heaven and His Saints, and with that he spat on the coin, threw it to the ground, and began to trample it underfoot.

The emperor gave orders to take the saint to prison, where already there were languishing 342 Elders, condemned for the veneration of icons. In this prison St Stephen spent eleven months, consoling the imprisoned. The prison became like a monastery, where the usual prayers and hymns were chanted according to the Typikon. The people came to the prison in crowds and asked St Stephen to pray for them.

When the emperor learned that the saint had organized a monastery in prison, where they prayed venerated holy icons, he sent two of his own servants, twin-brothers, to beat the saint to death. When these brothers went to the prison and beheld the face of the monk shining with a divine light, they fell down on their knees before him, asking his forgiveness and prayers, then they told the emperor that his command had been carried out.

But the emperor learned the truth and he resorted to yet another lie. Informing his soldiers that the saint was plotting to remove him from the throne, he sent them to the prison. The holy confessor himself came out to the furious soldiers, who seized him, dragged him through the streets of the city, and clubbed him to death. They then threw the lacerated body of the martyr into a pit, where they were accustomed to bury criminals.

On the following morning a fiery cloud appeared over Mount Auxentius, and then a heavy darkness descended upon the capital, accompanied by hail, which killed many people.

His skull was rescued by one of his followers and brought to the Dius Monastery. His relics are recorded in various Constantinopolitan churches and monasteries during the 13th–15th centuries. His body was deposited either at the Lips Monastery (Greek: Μονή του Λιβός) according to Russian travellers, or at the Martyrion of St Stephen the Protomartyr in the quarter of Constantinianae, while his right hand was at the Pantokrator Monastery.

His skull, which became the subject of a special procession presided over by the Eparch of Constantinople on his feast day of November 28, was located at the Peribleptos Monastery (Greek: Μονὴ τῆς Θεοτòκου τῆς Περιβλὲπτου) in the 14th century.

Today it is claimed to be in the possession of the Saint Panteleimon monastery at Mount Athos.

As a prominent defender of the images, and iconoclasm's greatest martyr, Stephen is portrayed holding an icon or a diptych of icons, usually displaying the busts of Christ and the Virgin Mary. He is also one of the witnesses shown in the famous Russian icon celebrating the "Triumph of Orthodoxy".