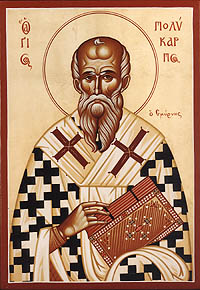 The holy, glorious and right-victorious Hieromartyr Polycarp of Smyrna was a bishop and martyr of the early Church[1] and is regarded as one of the three chief Apostolic Fathers.[2] The year of his birth is reported as anywhere from A.D. 69 to 81, and his martyrdom is recorded as being from A.D. 155 to 167. According to The Martyrdom of Polycarp, he died, bound and burned at the stake then stabbed when the fire failed to touch him, in Smyrna (the seat of his episcopacy and modern day Izmir in Turkey), and he was also reported to be a disciple of the Apostle John. His feast day in the Church is February 23.

There are two chief sources of information concerning the life of Polycarp. The first is known as the Martyrdom of Polycarp,[3] and the second source is St. Irenaeus of Lyons' Adversus Haereses.[4]

Polycarp was a correspondent of St. Ignatius of Antioch, one of the other Apostolic Fathers. Ignatius addressed a letter to him, and mentions him in the letters to the Ephesians and to the Magnesians. Polycarp visited Rome during the time of Pope Anicetus, and found their customs for observing Pascha differed. They agreed to peaceably disagree on this matter. Polycarp was offered the opportunity of celebrating the Eucharist in the Pope's church.

St. Irenaeus of Lyons, a disciple of Polycarp, relates how and when he became a Christian and in his letter to Florinus stated that he saw and heard him personally in lower Asia; in particular he heard the account of Polycarp's intercourse with John the Evangelist and with others who had seen Jesus Christ. Irenaeus also reports that Polycarp was converted to Christianity by apostles, was consecrated a bishop, and communicated with many who had seen Jesus. He repeatedly emphasizes the very old age of Polycarp. The Martyrdom has Polycarp himself give his age on the day of his death as 86 years.

St. Boukolos (or Bucolus, February 6), the first bishop of Smyrna, chose Polycarp as his successor before reposing in peace.

The date of Polycarp's death is disputed.

Eusebius of Caesarea dates it to the reign of Marcus Aurelius, circa 166-167.

In The Martyrdom of Polycarp Polycarp is recorded as saying on the day of his death, "Eighty and six years I have served him." which indicates that he could possibly have been eighty-six years old or that he had lived eighty-six years since his conversion to Christianity. A post-Eusebian addition to the treatise dates his death to Saturday, February 23 in the proconsulship of Statius Quadratus—which works out to be 155 or 156.[5]

The sole surviving work attributed to Polycarp is his letter To the Philippians and an account of The Martyrdom of Polycarp; both of these works form part of the writings usually collected under the title The Apostolic Fathers. The latter is considered the earliest genuine post-biblical account of a Christian martyrdom, and one of the very few genuine such writings from the actual age of the persecutions. It also is one of the earliest accounts of the veneration of relics, as the Martyrdom records that after Polycarp's immolation, the faithful piously gathered up his bones as precious treasures.

The right arm of St. Polycarp had been kept at the Holy Monastery of Panagia Ambelakiotissa - Saint Polycarp, outside Nafpaktos, Greece, from 1475 until it was stolen on March 14, 2013. Although the three thieves were apprehended, the relic has not been returned to the monastery.[6]

By sharing in the ways of the Apostles,
you became a successor to their throne.
Through the practice of virtue, you found the way to divine contemplation,
O inspired one of God;
by teaching the word of truth without error,
you defended the Faith, even to the shedding of your blood.
Hieromartyr Polycarp, entreat Christ God to save our souls.

Through virtues, you offered spiritual fruit to the Lord,
therefore, you were glorified as a worthy hierarch, wise Polycarp.
Today, we who have been enlightened by your words
extol in song your praise-worthy memory,
there-by giving glory to the Lord.