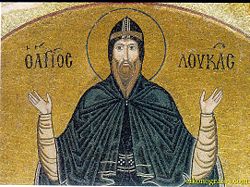 St Luke the Younger (896-953 AD). Mosaic from the Monastery of Hosios Loukas.

Our Venerable and God-bearing Father Luke the Younger, also Luke of Steiris, Luke of Steirion, Luke the New of Mount Stirion, Osios Loukas O Steiriotis, Luke the Wonderworker, Luke Thaumaturgus, or Luke of Hellas (896-953 AD) was a Byzantine saint of the tenth century AD, who founded the Monastery of Osios Loukas (Venerable Luke) on the slopes of the "great and godly mount of Helicon"[1][note 1] between Delphi and Levadia, near the coast of the Gulf of Corinth in Boeotia, Greece. He was also one of the earliest saints to be seen levitating in prayer.[note 2]

The principal source for Luke's life is an anonymous Life written by a monk of Hosios Loukas who had been one of Luke's followers. According to some, he reposed in the year 946; according to others, in 953 AD.[2] St. Luke's feast day is celebrated on February 7, with the translation of the his relics celebrated on May 3.

Saint Luke was born in 896 to pious parents who came from Aegina but were forced to settle on the Greek mainland due to Saracen raids. Luke was the third of the seven children of Stephen and Euphrosyne. From his earliest years, he showed a desire for a life of ascesis and contemplation usually only found in seasoned elders. He abstained from all flesh, cheese, eggs, and delicacies, drank only water, and kept a total fast on Wednesdays and Fridays. While herding cattle or tilling the family fields, he would often give away his food and even his clothing to the poor, returning home naked. He once gave away almost all the seed which was needed for planting in the fields. The Lord rewarded him for his charity, and the harvest gathered was greater than ever before.

When his father died, he abandoned farm work to devote himself entirely to prayer, making such progress that he was often witnessed by his mother lifted above the ground while praying.[3]

As a child Luke tried twice to leave home to seek a solitary life of prayer. The first time, he attempted to withdraw to Thessaly, but was captured by soldiers lying in wait for escaped slaves and was returned home.[4] The second time he had more success, meeting two monks journeying from Rome to Jerusalem[5] who took him to a monastery in Athens where he received the small habit.[6][note 3] At this point he was only fourteen years old (910 AD), and Luke's mother who was very concerned for him, prayed for her son's return. After seeing his mother in a dream, tearfully calling for her son, the abbot sent him home.

He returned home for four months, and then with his mother's blessing he set out again upon the monastic life, going to a solitary place on a mountain called Ioannou (or Ioannitsa). Here there was a church dedicated to the holy Unmercenaries Cosmas and Damian, where he lived an ascetical life in constant prayer and fasting for seven years.[7] The Life records with suspicious symmetry that during this time Luke received the great habit[note 4] from two monks[note 5] travelling from Jerusalem to Rome (presumably the same two from whom he had received the small habit on their outward journey).[8] After this, St Luke redoubled his ascetic efforts, for which the Lord granted him the gift of foresight.

Luke's fame spread and a number of miracles are ascribed to him during this period, such as revealing to two brothers the location of their dead father's buried treasure.[9] Numerous proofs of Luke's holiness are also given, such as sleeping in a trench to remind himself of death,[10] or being visited in a dream by an angel who let a hook down Luke's mouth and "drew out a certain fleshly member therefrom", freeing him from the temptations of the flesh.[11]

After a seven years on Ioannou, the saint moved to Corinth because of an invasion of the Bulgarian emperor Symeon (which Luke had predicted).[12] Hearing about a certain Stylite at Zemena (Gimenes) near Corinth, he went to see him, and remained for ten years to serve the ascetic with humility and obedience.

Afterwards, ca. 927 AD, the saint returned again to Mount Ioannou to build his own community and again pursue asceticism. Often he would be forced to move by the number of visitors who learned of his holiness, and came to him for prayer or a word of counsel or prophecy, no matter how secretly he tried to live. Luke drew so many followers that he found the distractions unbearable and decided to retreat further into the wilderness, with the blessing of his Elder Theophylactus.[13] Three years later, however, Luke was displaced again, this time by a Magyar invasion.

Luke retreated with the local villagers to the nearby island of Ampelon.[14] Once there, Luke found the desert island to be a suitable place to pursue his solitary ascetic life, and stayed for three years, enduring terrible thirsts.[15] His sister would occasionally bring him some bread, but he gave much of it away to the needy or to passing sailors. 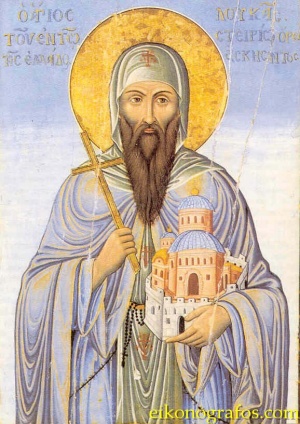 Eventually Luke's disciples persuaded him to leave, and he returned to the mainland and settled for the remainder of his life in the far more amenable environment of the present Hosios Loukas, where he founded his hermitage ca. 946 AD in the area of Stiris (which may be a corruption of Soterion, or place of healing).[16][note 6]

Here brethren gathered to the elder, and a small monastery grew up, the church of which was dedicated to the Great Martyr Barbara. Dwelling in the monastery, the saint performed many miracles, healing sicknesses of soul and of body.

Saint Luke fell ill in his seventh year at Stirion. Foreseeing his end, the saint confined himself in a cell and for three months prepared for his departure. When asked where he was to be buried, the monk replied, "Throw my body into a ravine to be eaten by wild beasts." When the brethren begged him to change these instructions, he commanded them to bury his body on the spot where he lay. Embracing his disciples, he asked them to pray for him, prophesying that the place where he died would someday be the site of a great church and monastery. Then raising his eyes to heaven, he said, "Into Thy hands, O Lord, I commend my spirit!" and reposed in peace and joy. St Luke fell asleep in the Lord on February 7, 953.

Myrrh flowed from his holy relics,[note 7] and many healings occurred. His tomb exuded a fragrant oil which was collected and burned in a lamp, and many miracles and healings were wrought at the tomb. The rumour that his relic worked miracles brought great numbers of believers to the monastery to be healed, and the original buildings gave way to more monumental structures.[16] As the Saint had predicted, two churches and a monastery were built there, and the monastery of Hosios Loukas became a great place of pilgrimage, as it remains to this day.[note 8]


Kontakion of St Luke of Mount Stirion Tone 8[17]
God in ineffable judgment chose thee before thou wast fashioned according to His good pleasure;
He took thee from thy mother's womb,
He sanctified thee as His servant.
As the Lover of mankind,
He guided thee to Himself,
before Whom thou dost now stand rejoicing,
O Luke.

A brief life of the saint is given by Photios Kontoglou: