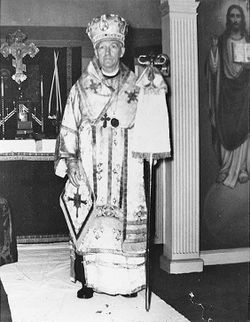 Archbishop James in his chapel in the 1950’s

His Grace, the Most Reverend Archbishop James (Toombs) of Manhattan (August 30, 1887 – November 1, 1970) chartered the Orthodox American Church of which he was hierarch from 1959-1970. He had earlier served as head of the American Orthodox Mission and vicar of the Eastern American diocese of the Russian Orthodox Church Outside Russia (ROCOR) from 1951-1959. Archbishop James is believed to have served the first Paschal Liturgy in America entirely in English.

Archbishop James was born Roy C. Toombs, the ninth of ten children, on August 30, 1887 in Winfield, Kansas to American Civil War veteran Anson Toombs and Canadian immigrant Hannah Elizabeth Nichols. His parents were Baptist, though Roy never showed much interest in religion during his youth. Roy was a farm boy, but in his time Winfield had become the rail hub of the Kansas Flint Hills with a bustling population of 5,000 people by 1900. Fascinated by trains, young Roy was well known to hop freights and visit different parts of the country.

Roy's first wife was Mary E. Toombs. They married in 1910, and by the next year produced a son named Farrell. The family relocated first to Missouri but by 1920 were situated in Chicago's seventh ward. He was co-owner of Toombs-Daley brokerage house on LaSalle Street, and an investment banker in Downers Grove. In 1927, he was made president of the International Life Insurance Company of St. Louis, Missouri. However, by August of the next year, Roy was embroiled in scandal when $3,500,000 in securities was found to have been sent from International Life Insurance Company to Toombs in interlocking $1,000,000 loans, along with irregularities in the Toombs-Daley brokerage firm and the bank in Downers Grove exposed in bankruptcy court. Though released after his initial arrest, Roy was arrested a second time and extradited to Missouri where in 1929 he was sentenced to pay a $3,000 fine and serve three years in the Missouri State Penitentiary. He was also convicted of mail fraud by a Federal Court and by 1931 was an inmate of the Federal Penitentiary in Leavenworth, Kansas. It's unknown whether the federal and state sentences were serves concurrently or if Roy was granted an early release from state prison. This affair followed his as late as 1936 when we was sued for $600,000 in connection with the International Life Insurance Company affair.

Around this time, there is evidence of inquiry by Roy Toombs into the Episcopalian Church and instruction under a Jesuit priest for conversion to the Roman Catholicism. The banking profession of that era was predominantly made up of Episcopalians and Freemasons, and it is theorized that Roy's interest in the Episcopalian faith may have taken place in the early 1920s during his stint in Chicago. The latter is suggest to have possibly taken place during his time served in jail.

In 1942 Roy Toombs registered for the draft, listing his profession as "priest of the Holy Orthodox Church in America," an independent Orthodox church led by George Winslow Plummer out of New York City. For the duration of the Second World War, Toombs is said to have worked intelligence for the US Government. Around this time, articles by Toombs appear in Plummer's Rosicrucian periodical "Mercury". HOCiA claimed succession from the American Orthodox Catholic Church of Aftimios Ofiesh through Ignatius (Nichols) of Washington. Plummer consecrated Theodotus S. DeWitow (Stanislaus Witowski) in 1936, who in turn consecrated Toombs on January 30, 1944, at which point Archbishop James became primate of the HOCiA. By this time Toombs had remarried to a woman named Maryangela, who'd founded the Better Human Resources Movement based on analysis of the Hawthorne Studies her stepson Farrell helped conduct.

Archbishop James moved to New York City and incorporated his mission into the Cathedral of Our Saviour at 226 West 69th Street, Manhattan, by 1947. He affiliated himself with episcopus vagans John Chrysostom More-Moreno (consecrated in 1933 by Bishop Sophronios (Beshara) of Los Angeles) and founded the Eastern Orthodox Catholic Church in 1951, with John and Gregory R.P. Adair as his priests. Around this time, Toombs had somehow met and come under the mentorship of Archbishop Vitaly (Maximenko) of Jersey City. It is believed that after the events of the Cleveland Sobor, Toombs was pivotal through his old war contacts in swaying the opinion of the Federal Government away from acknowledging the complaints of the North American Metropolia against the relocation of Metropolitan Anastasy (Gribanovsky) of Kishinev and ROCOR's Synod of Bishops to the United States from Europe in 1949. During this time, Farrell was ordained a priest by his father under the name Thomas.

Conversion to Canonical Orthodoxy and Episcopacy 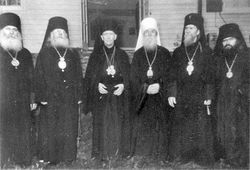 Archbishop Vitaly's mentoring culminating in the question of the EOCC's canonicity, which prompted Toombs and his second wife Maryangela to be tonsured monastics at Holy Trinity Monastery in Jordanville, New York in early July of 1951. A few days later Fr. James (Toombs) was consecrated on the Feast of the Holy Apostles Peter and Paul on July 21 as vicar the Diocese of Eastern America and Jersey City at the New Kursk-Root Hermitage in Mahopac, New York. Concelebrating with Metropolitan Anastasy were Archbishop Vitaly, Archbishop John (Maximovich) of Paris, Bishop Nikon (Rklitzky) of Florida, and Bishop Seraphim (Ivanov) of Holy Trinity. Archbishop James was installed as the first Archbishop of Manhattan and was tasked with heading a completely autonomous American Orthodox Mission within ROCOR, insofar that he was allowed by the Synod to stay short-haired and clean-shaven to adequately perform his duty. In 1953, Bishop James single-handedly changed the practice of receiving Roman Catholics into the Russian Orthodox Church when he delivered a report stating that the American Orthodox Mission received all converts by baptism, where prior to the Russian Revolution, Catholic converts were accepted simply through confession. The change garnered no opposition.

Upon his entry into ROCOR, Gregory and John Adair engaged Archbishop James in a lawsuit over the Cathedral of Our Saviour on West 69th Street. Fearing that he would take the church with him, the Adair Brothers claimed rather that it was property of the Eastern Orthodox Catholic Church. There is speculation that a canon lawyer from the North American Metropolia came to the EOCC's aid and helped them win rights to the church in 1952, which was later sold for a great sum to make way for Lincoln Center. For the remainder of his life, Archbishop James would serve in the Chapel of the Holy Apostles, built into his apartment.

Though not part of the Synod of Bishops, during his tenure in ROCOR, Archbishop James was very active. He was a concelebrant at the consecration of Bishop Averky (Taushev) of Syracuse on the Feast of the Holy Spirit in 1953 alongside Metropolitan Anastasy and others, attended Hierarchical Council meetings and celebrations at Holy Trinity Monastery and New Kurk-Root Hermitage, and in so doing, meeting most of the Synod of Bishops. Archishop James attained a flock, but the language barrier between American and Émigré made much of anything outside the Mission difficult. Those who wished to study at Holy Trinity Seminary in Jordanville could only be instructed by Archpriest Adrian Rymarenko, with Archimandrite Lazarus (Moore) helping translate seminary materials. Archbishop James's former wife Maryangela couldn't join the Russian-speaking Holy Dormition Convent "Novo-Diveevo" in Nanuet, New York, and so was allowed to live separately on the second floor of his apartment.

However, his episcopacy was not without controversy. Archbishop James's past connections with the esoteric masonic Christianity of George Winslow Plummer, reminiscent of the Theosophy movement which raged in Pre-Revolutionary Russia, and association with wayward and wandering bishops led to rumors of occultist practices taking place within the Mission. Another sore point came with the inconvenient living arrangement of the formerly-married bishop and nun. Furthermore, to many of the Russian émigré mindset, English-language translations of services were seen as very taboo, compounded by the seeming isolationism of the American Orthodox Mission. Protopresbyter George Grabbe led the opposition against Archbishop James, drawing several members of the Synod of Bishops to his side. By 1955, Archbishop James expressed his desire to Metropolitan Anastasy to continue missionary work as hierarch of an independent American Church.

In 1959 Archbishop James dissociated himself with the Russian Orthodox Church Outside Russia and founded the Orthodox American Church (formally, The Holy Orthodox Catholic Apostolic American Church), incorporating concepts of the Better Human Relations Movement. For the next decade Archbishop James continued his two-fold mission of bringing Americans to Orthodox Christianity and translating every text of the Church into English. He was known to be a very kind, patient, and loving pastor, and accepted the responsibility of being father confessor to a number of Orthodox bishops in New York.

One of Archbishop James's successes is the second primate of the OAC, Metropolitan John Schneyder, who joined the mission in 1952, was baptized and christmated in 1953, studied at Holy Trinity Seminary under Archpriest Adrian Rymarenko from 1953-1955, and under Archpriest Damian Krehel at St. Tikhon's Orthodox Theological Seminary from 1955-57. In November of 1961, Archbishop James ordained him a deacon, and in July of 1962 a priest. On April 25th, 1970, before his death, Archbishop James consecrated Fr. John to the episcopacy.

Once the weakness of his advanced age set in, Maryangela took care of Archbishop James until his repose on November 1, 1970. Though no representatives of ROCOR attended his funeral, Metropolitan Andrew (Petkov) of New York of the Bulgarian Eastern Orthodox Diocese of the USA, Canada and Australia did. To this day, the Orthodox American Church considers itself an autonomous mission of the Russian Orthodox Church Outside Russia.