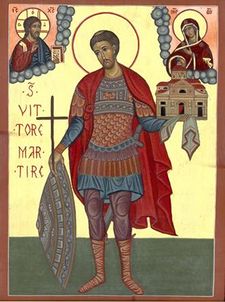 The Holy Martyr Victor of Milan, also Victor the Moor and Victor Maurus, was a Christian soldier in the Roman army who was tortured and beheaded in the early fourth century after his destruction of altars to Roman pagan gods revealed his Christian faith. He is remembered on May 8.

Victor was born in ancient Mauretania, a Roman province on the Mediterranean coast of north Africa. He was a Berber of the Mauri tribe, after which the Moors were named. Born into a Christian family during the latter part of the third century, he nevertheless became a soldier in the Roman army and advanced through the ranks to become a member of the Praetorian Guard that served the Roman emperor Maximian who was the emperor for the Western Roman Empire from 286 to 305.

His zeal for Christ became known to Maximian after Victor had destroyed a pagan altar to a Roman god. Brought before the angry emperor, Victor confessed his life long love of Jesus Christ that he would not deny. Maximian then ordered Victor's imprisonment. Finding that Victor would not deny Christ, the emperor then ordered his further subjection to imprisonment and various tortures. Still rejecting the emperor's calls to sacrifice to the pagan gods, Maximian finally, in 303, directed the beheading of Victor in the emperor's garden in a small wood called The Elms in Milan.

Before his martyrdom, Victor foretold that the emperor would soon die. After his beheading on May 8, Maximian ordered that no one was to bury his body so that it would be eaten by the wild animals. When six days later the emperor sent his soldiers to check the condition of Victor's body, they found it untouched by the animals. The emperor then ordered his body buried. After having received permission to bury the martyred Victor's body, Bishop Maternus of Milan found it was guarded by two beasts, one each at his head and his feet. As the saintly Maternus approached, the beasts withdrew and Bp. Maternus wrapped the corpse in linen and buried it, in peace, not far from the small wood on May 14.

Veneration of the martyr Victor began soon after his death. St. Gregory of Tours recorded that miracles occurred above his grave over which a church was built. St. Ambrose of Milan encouraged devotion to the martyr Victor.