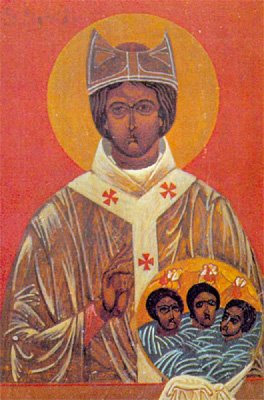 St. Sigfrid, Bishop Växjö and Second Apostle of the North

Our father among the saints, Sigfrid of Växjö or Sigfried of Sweden or Sigefrid of Wexiow or (also Sigefrid, Sigfried, Siegfrid, Siegfried, Sigfridus, Sigurd), Second Apostle of the North (d. 1045) was a Benedictine monk and bishop of Växjö, Sweden. His feast day is February 15.

Sigfrid is said to have been born in Glastonbury, England in the second half of the 10th century. It is said that St. Alphege, Archbishop of Canterbury, converted him to the Christian faith. Sigfrid was an eminent priest in York who was sent by the legendary King Mildred to assist in the Christianization of Scandanavia. It is theorized that this could have been King Æthelred II the Unready.

At the behest of Olaf I Tryggvason, Sigfrid arrived in Norway in 995 with two bishops and his three nephews who were Cluniac monks: Unaman the priest, Sunaman the deacon, and Winaman the subdeacon. There he became a court bishop for the Norwegian King and travelled to the isle of Godey in Saltenfjorden with him to engage a tenacious adversary of Christianity, the renowned pagan sorcerer Raud the Strong. Inclement weather prevented landfall, so Sigfrid took his liturgical vestments to the prow and, lighting tapers and incense, placed a cross upon the stern and read from the Holy Gospel before blessing the vessel with holy water. The sail was ordered to be stowed away and the king's ships rowed into the ford, at which point a miracle occurred wherein their passage stayed calm while a storm raged around them.

Due to the Battle of Svolder of 999-1000, Sigfrid and his nephews left for Sweden in 1002 where they founded three churches in Västergötland (West Gothland). This area was already being Christianized by the bishop Odinkar Hvite the Elder, who was based in Skara. Thus Sigfrid and his nephews went east to the region of Värend in Småland to continue their missionary efforts, erecting first a cross and then building a wooden church on the shores of Växjö Lake. Soon, eleven prominent men of the area were soon brought to the Christian faith and baptized in a spring near the mountain Ostrabo. Their influence began a steady stream of pilgrims, who flocked to hear the Word of God and gaze upon Sigfrid's silken vestments, gold and silver vessels, and other beautiful objects brought with him from England. King Olof Skötkonung soon became curious and sent a trusted councilor to investigate the matter. According to the councilor, as Sigrid lifted the paten during the Divine Liturgy, the prosphora became a young Boy, whom he kissed, at which time the vision disappeared. Astonished by this, the king sent for the holy bishop immediately; but en route, Sigfrid made a detour in Utvängstorp to enlighten and baptize the people there.

In 1008, Sigfrid baptized the royal family in a spring near the village of Husaby, making Olof Skötkonung the first Christian King of Sweden, which marked the beginning of the Christianization of Sweden. Sigfrid next traveled north to re-establish the See of Uppsala that had been founded by St. Ansgar, but the reversion to paganism was too strong in the region and he left in failure. During this time, the English bishop Gotebald was sent from the Danish frontier city of Lund to Scania, where he built its first church and was appointed bishop. In 1014, Olof Skötkonung assisted Sigfrid in the establishment of the Diocese of Husaby (later Skara), which became a suffragan of the Archdiocese of Hamburg-Bremen. The first diocesan bishop, a German named Thurgaut, was consecrated by Sigrid. At this time, the diocese was comprised of "the Goth lands" Västergötland and Östergötland (East Gothland), some of Småland, and also a chunk of other surrounding counties. Sigfrid is said to have consecrated a vicar bishop for the eastern half of the diocese in the city of Linköping in Östergötland, and King Canute sent an English bishop named Bernhard to fill the see of Scania. By 1028, the English missionary Ulfrid attempted a third re-establishment of Christianity in Uppsala, but was martyred upon anathematizing the pagan god Thor and assaulting his idol in the local Thing.

Entrusting the administration of Växjö to Unaman and his brothers, Sigfrid left to spread Christianity in Denmark. While he was gone, however, a local greedy nobleman Gunnar Gröpe gathered a group of pagans together to kill Sigfrid's brothers and ransack the church in Växjö. When Sigfrid returned from his mission, he found his nephews' heads in a weighed tub that was at the bottom of Lake Helgasjön near the church. The bodies were buried deep inside a forest. According to Sigfrid, the heads still possessed the ability to speak and told him the names of their murderers. Sigfrid glorified God that He allowed Unaman, Sunaman, and Winaman to become martyrs. Soon Olof Skötkonung heard of the occurrence in Växjö and offered to execute the perpetrators, which Sigfrid refused. The King also offered to extract from them weregild, which the saint also refused. Finally, Sigfrid requested landed property and was gifted the estates known as Hof and Tjuby. The laying of foundation remained extremely difficult for the destitute bishop, but he eventually rebuilt the church and placed inside of it the relics of his holy kin.

In his old age, Sigfrid had become very forgetful: once, he ordered a bath drawn during a fasting day, and a voice came down and reproached him, at which point he removed himself from the bath and repented. He visited Bremen in 1030 and reposed in the Lord in 1045. His relics were placed below the high altar of the Växjö church and performed many miracles until the shrine was dismantled after the Swedish Reformation. Sigfrid's legacy continued under his disciples, Bishops David and Eskil, who were later martyred.

Some sources claim Sigfrid to have first been the Archbishop of York before being sent to Scandinavia. Although no list of Archbishops of York seems to verify this, after the death of St. Oswald of Worcester, there is a period of vacancy between 992-995. The separate dioceses of York and Worcester had been held by a single bishop from 971-992, and again from 995-1042. After St. Oswald's death, Ealdwulf was consecrated Bishop of Worcester in 992, but appointed also Archbishop of York only in 995. This brief three-year period could have been a result of Sigfrid's ascendancy. However, since no record shows an Archbishop Sigfrid around this time, he may well have simply been a temporary administrator for the see. Another possibility is simply that he was consecrated a bishop for Norway while still in York. However, the fact that Sigfrid arrived in Norway the same year that Ealdwulf became Archbishop of York proves a curious fact.